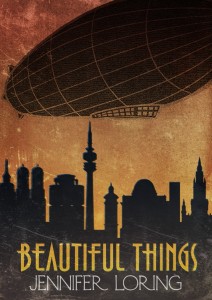 Mitzi Weinhaus is the talentless daughter of two Munich Kabarett stars. One night, in an underground club that has so far escaped Nazi detection, she meets the enigmatic singer Giselle, who offers her the chance to be a hero. All Mitzi has to do is infiltrate the notorious Dachau death camp, but she won’t have to do it alone.Teamed up with the mysterious Wolfrik, for whom she develops an alarming attraction, Mitzi soon finds herself ensnared in a world of secret societies, super-soldiers, monsters, and gods. Double-crossed on all sides, it is up to her to save her parents from certain death–and to save her heart from one of the most powerful beings in the universe.

BEAUTIFUL THINGS is available from Amazon.

Jennifer Loring received her MFA from Seton Hill University’s program in Writing Popular Fiction, with a concentration in horror fiction, and she holds a B.A. in Studio Art from Mercyhurst University. In 2013, she won Crystal Lake Publishing’s first Tales from the Lake horror writing competition. Jenn signed a four-book deal with Permuted Press in early 2014, and DarkFuse will release her novella Conduits in September 2014.Jenn lives in Philadelphia, PA with her husband, Zach, and their turtle, Ninja.

The Last Spy by Bob Reiss

Locked and Loaded by Charlie Flowers