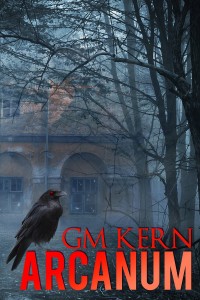 He was always special…too special. Seven years ago they murdered his family and took him. Something ominous occurred in the black void that is his memory and it has changed him. THEY want him back and are coming with a vengeance.

Shawn Mitchell woke up from a coma, his last memory is that of the murder of his family and of his own kidnapping seven years ago. A catastrophic event propels Shawn into a quest for answers as he and his friends race against time to discover what was done to him before his special abilities take over and alert THEM of his whereabouts.

ARCANUM is available from Amazon and Amazon UK.

GM Kern is the pseudonym for a Federal Civil Servant, formally with the Department of the Defense, who has deployed to Afghanistan and Iraq. Originally from Long Island, Kern has lived and worked in 9 states and has traveled to over 15 countries.

Kern currently lives in the DC – Virginia – Maryland area. And, when not researching the next novel in the Redemption of the Guardians series, travels to interesting and sometimes exotic locations.

Kern is also a member of International Thriller Writers Association (ITW) and the Society of Children’s Book Writers and Illustrators (SCBWI).