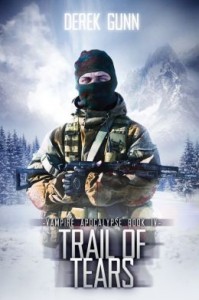 The drying up of the world’s oil resources leads to the fabled End of Days. Technology stagnates and communities grow ever more insular. With communication between cities lost and attention turned inward, the vampires rise from the shadows where they have survived for centuries and sweep across the globe.

By the time word spreads, it is far too late and Vampires enslave humanity and keep them in walled cities to breed. The Vampires are masters of the darkness but maintain control by day through the use of thralls—humans who have been bitten but have not yet crossed over, and whose inhuman lusts make daylight as terrifying as night.

VAMPIRE APOCALYPSE, TRAIL OF TEARS is Derek Gunn’s fourth book in the acclaimed series. The author, who is a fan favorite in the genre, agreed to answer a few questions about the book and his life.

Tell us a bit about your new release, VAMPIRE APOCALYPSE (BOOK #4): TRAIL OF TEARS.

It has taken a while to write this one. The first three books came out one after the other and then I took a break to write some other novels. My mind kept returning to the characters in this series though. While I did not leave it in a cliff-hanger, per se, some of the plotlines were certainly not completely resolved.

Many of the reviews on Amazon and a number of mails sent to me directly kept asking for another one so I started to think seriously about where the story could go and how I could make it different but still retain the elements that made the first three so popular.

The fact that Permuted Press wanted to release the first three books in new editions with cool new covers only made the decision easier.

I don’t want to give too much away but the title very much describes the core of the novel. The thralls have found the human rebels, a nuclear cloud threatens to sweep over them and the vampires are changing. Add to this the fact that the clock on the serum finally winds down and there is plenty to keep everyone interested. Hopefully.

How was the world of VAMPIRE APOCALYPSE born?

I suppose it was born from the fact that many of the books that were available in this genre did not meet what I wanted to read. Vampires were becoming sexy, romantic, angst-driven—and I just didn’t like the way novels were going. I decided I would try and write the novel that I would like to read. To this day I still keep that in mind when writing anything.

Your day job is as a Specialist Consultant for a global telecommunications company. What’s it like to take your Consultant hat off at the end of the work day and slip into your Scary Guy hat? Are there any rituals involved?

It is normal to be honest, though I’m sure I’ll come up with a story some time merging the two worlds together. I don’t get a lot of writing done during the week anymore. I used to but it’s hard to remain in front of the laptop all day and night. I usually start fresh on a Saturday and Sunday and work through until the football starts, after the usual ritual sacrifice of course.

Is entering a world where everything we know has gone boom a liberating experience, scary, or a bit of both?

It certainly allows a certain blank canvass where you can mold the world to what you want and that allows a certain freedom. However, it poses its own problems where you have to consider how things would change in such a world. While the books are fiction I do try to make them as realistic as possible. You can’t ignore things like power stations being left abandoned, ammunition becomes a scarce resource so you can’t just have everyone shoot thousands of rounds without impact. Medicine, infection and food all have a huge effect on survival so it’s hard to keep everything realistic. It certainly drives home the fact that we are precariously balanced in the modern world.

How, for you, is writing serial fiction different from standalone work?

Well, the first thing is that you have to keep a lot of detailed notes. Naming characters and keeping their descriptions and personalities accurate and stable throughout a number of books is harder than I thought it would be. The books have all been edited professionally now and any inaccuracies have been dealt with but it is difficult to catch them all on your own. It also becomes more difficult to make each book unique and not just a do-over. I think I have the balance right in this new book.

On the positive side you do get to explore more of the world and the characters when you continue their stories past just one novel.

Please tell us a bit about yourself.  Lifelong interests, hobbies, phobias, and pet peeves?

I have always loved reading, there’s a shocker. Ireland in the 1970s was not an easy place to get horror or fantasy novels as the US publishers did not sell to international markets and there was no Internet—can you even imagine a world without the Internet now? Anyway, for this reason any book I did get was devoured and I became adept at searching for the books I loved.

Comics were another huge influence; again I grew used to missing editions. I remember reading Spider Man 121 and then missing 122 as it never came in—just the biggest issue ever to miss.

I still read voraciously and am surrounded by books where I write. I can’t ever imagine a day going by without reading.

Phobias and pet-peeves—The oncoming zombie apocalypse and why hasn’t it happened yet?

I grew up with Stephen King, didn’t we all? James Herbert and Graham Masterton, Edgar Rice Burroughs and Robert E. Howard all had a huge impact on me. Still do in many cases.

What do we have to look forward to from you? Anything new and exciting in the works?

I am already more than half way through the next Vampire Apocalypse novel though I haven’t got a title yet, so that will be next to be released. I also have another series that will be released through Permuted Press in September this year. This is a historical fiction series with a large supernatural leaning. The stories follow the crew of the HMS Swift set just before the Napoleonic wars. Permuted are releasing THE DIABOLICAL PLAN, THE ISLAND OF CRIMSON SEAS in an omnibus paperback and e-book edition. I have started a sequel for this as well but it is shelved until I finish the new Vampire Apocalypse novel. 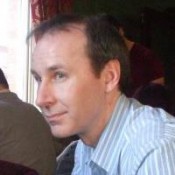 In August 2012, Derek Gunn self published in eBook editions two novellas (THE DIABOLICAL PLAN and THE ISLAND) and a novel (CRIMSON SEAS) in his historical naval horror fiction series, The HMS SWIFT ADVENTURES. These have been picked up by his publisher Permuted Press for reissue in July 2014 as a single volume in print and eBook.

To learn more about Derek, please visit his website.