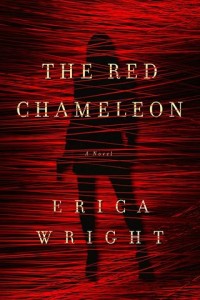 Karen Harper caught up with very busy poet-turned-thriller-author, Erica Wright, just as she was getting ready to launch her debut novel.  Erica is heading to New York City in June for events and publicity, and we wish her all the best—and to her intrepid heroine Kathleen Stone.

What is THE RED CHAMELEON about?

With a little help from the best wigmaker on the Atlantic seaboard, Kathleen Stone can take on a variety of personas, from a posh real estate agent to a petulant teenage boy. She was once a valuable undercover cop for the New York Police Department, but since her early retirement following a botched case, she has gone a little soft. These days, she mostly catches cheating spouses in flagrante. When one husband ends up not so much adulterous as dead, Kathleen must use her rusty skills to catch a killer.

You have two fascinating elements in your past:  you are a poet and you have taught at the John Jay College of Criminal Justice. What did you teach there? How have these experiences impacted your first novel?

I taught composition courses at John Jay, but snuck a little poetry onto the syllabus. Carolyn Forché’s “The Colonel” was always a favorite. My students definitely played a role in my interest in crime writing. They were mostly going into criminology, so I tried to educate myself on their career paths even if only to make our conferences more productive. I had no intention of writing a mystery novel when I started teaching, but looking back, it almost seems inevitable.

Praise for your earlier book of poetry, INSTRUCTIONS FOR KILLING THE JACKAL, includes this comment:  “Wright knows life’s hardships leave their imprints on us.”  As a fairly young person and debut fiction author, how have you managed to write so compellingly about the tough things in life?

I moved to New York when I was eighteen, which is both the best and worst age to take on this beast of a city. If a psychic had told me everything that would happen—from personal challenges to living downtown on September 11th—I never would have left my small town in Tennessee. But I’m glad I did.

Another positive review of your earlier writing comments on your skilled “embrace of violence” in your writing.  Is THE RED CHAMELEON a violent story?

You know, it’s funny, I think my poetry is actually more violent than my fiction. My first book of poems dipped into the Southern gothic tradition with a healthy dose of Greek mythology. Some of those myths are pretty horrifying. But most of the violence in THE RED CHAMELEON takes place off stage. There are a couple of scenes that might make me flinch, but I intentionally avoided being graphic for the sake of being graphic.

Your heroine, Kathleen Stone, “can take on a variety of personas.”  How much of this talent is actually you or is this just fiction?  The title word chameleon really emphasizes this aspect of Kathleen’s character.  But can you give us an idea about why you chose to emphasize the word red?

Kathleen’s ability to fit in everywhere is wishful thinking on my part. I have the opposite talent—I’m a little uncomfortable in every situation! The color comes from her most frequent disguise in this book, a redhead who’s working hard to secure an alibi.

Are you working on more poetry and/or fiction?  Will we see Kathleen in a series?

I’m currently writing the second book in the series with the working title THE GRANITE MOTH. Unlike the red chameleon, the granite moth is a real animal, but I don’t know what that means for Kathleen’s character development, yet. And I’m sending out my second collection of poems, as well. As you might imagine, my desk is a disaster. 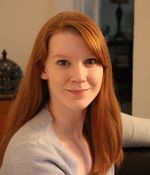 Erica Wright is a senior editor at Guernica Magazine. Her debut collection of poems, INSTRUCTIONS FOR KILLING THE JACKAL, was published in 2011. Her interest in crime writing began while teaching at John Jay College of Criminal Justice.