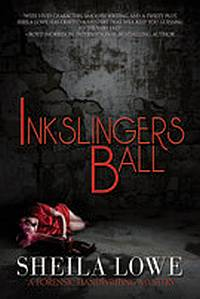 Handwriting expert Claudia Rose is back in another installment of the award-winning Forensic Handwriting Mysteries series. In INKSLINGERS BALL, Rose’s troubled young friend Annabelle Giordano has a secret tattoo that could get her killed. Claudia joins forces with her LAPD detective lover Joel Jovanic, who uncovers a tantalizing fragment of handwriting that has the potential to break several cases wide open. Meanwhile, Joel must also find a way to keep his personal life on track while facing a firebombing, a young girl found dead in a dumpster, and the disappearance of an investigative journalist.

How did the idea for INKSLINGERS BALL come about?

I seem to always start with the title. Several years ago, my older son, a tattoo artist, asked me to order him some supplies online. Poking around the supplier’s website I noticed an announcement for a long-ago tattoo convention called the Inkslingers Ball. The “perfect title” light went on in my head. The phrase was a natural for my Forensic Handwriting Mysteries: POISON PEN, WRITTEN IN BLOOD, DEAD WRITE, and LAST WRITES. Notice a theme?

But writing the book took a lot longer than expected. While I was working on LAST WRITES, my editor left Penguin and her replacement dropped my series. My agent felt she wouldn’t be able to place a series in the middle with another publisher, so I took a detour and wrote WHAT SHE SAW, a standalone novel of suspense about a young woman with amnesia. Not wanting my readers to forget my series characters, I gave them a secondary but important role in the book. Then WHAT SHE SAW was released and it was time to resurrect that perfect title, INKSLINGERS BALL, and create a story around it. By then I had parted ways with my agent and bonded with Suspense Publishing, who was happy to pick up the next in the series.

What can you tell us about Claudia Rose?

Claudia is a modern woman in her early forties, a forensic scientist whose work in the field of handwriting mirrors my own. She testifies as an expert in suspected forgeries, and does personality profiling through handwriting. In POISON PEN she meets LAPD detective Joel Jovanic, who finds his way into her heart, but can’t seem to get her to relinquish her long-held commitment phobia. When it comes to kids—she can’t have her own—Claudia is a soft touch. In WRITTEN IN BLOOD, she becomes attached to Annabelle Giordano, a troubled fourteen-year-old who plays a major part in INKSLINGERS BALL.

Without giving away the ending, what can you tell us about the antagonist?

Annabelle says he’s got the hardest, meanest face she’s ever seen, and that’s saying a lot, as the man she knew as her father had ties to the mob. This character has a habit of using young girls for whatever nasty purpose suits him, then throws them away when he loses interest. Or worse, when they cross him.

Erik (the aforementioned son) regularly offers to ink my skin, but sharp objects and I have not made friends, and as it turns out, a tattoo requires rather close contact with needles (I don’t even have pierced ears). So, he figured the next best thing was to take me to a tattoo convention. There’s nothing quite like experiencing firsthand the sights and sounds of Aztec dancers, body piercers, and, of course, the inkslingers themselves.

The other important research was police procedure. Much of INKSLINGERS BALL is seen through Jovanic’s eyes, and that required consulting with several real detectives. I didn’t want anyone in law enforcement reading the book and throwing darts because I had screwed up. I got insanely lucky with several detectives willing to answer my interminable questions. I had already attended Derek Pacifico’s Homicide School for Writers, but having him available for consultations was invaluable. On one occasion in a Skype session, Derek demonstrated exactly what Jovanic would do in a situation where he confronts a suspect with a weapon. Another detective gave me a homicide manual. And I just happened to get a real murder case involving handwriting, which gave me access to an actual murder book.

As per your webpage, you are a handwriting expert—which makes me grateful these interviews are typed—but how much of your real-life job gets into the books?

Not to worry, José, your secrets are safe. I’ve done well over fifteen thousand handwriting analyses, so at least a few of those cases come with interesting stories attached. When Claudia Rose opposes a hired gun in a court case in WRITTEN IN BLOOD, some of the dialogue comes straight out of a transcript from a case in which I actually testified. And when she works with Annabelle on graphotherapy to help her deal with PTSD, that’s something I would do with a client, too. My challenge is to keep a balance between putting enough information in the book to satisfy readers who are interested in learning about handwriting, and not turning it into a lecture.

How does this book compare, or differ, from the others in the series?

The big difference is it’s the first time in the series that I’ve written from points of view other than Claudia’s, which is usually close third person. Much of this story is told from Detective Jovanic’s POV, and sometimes from Annabelle’s. Nearly sixteen now, Annabelle’s progress grinds to a halt as events in INKSLINGERS BALL bring on episodes of post-traumatic stress and influence some of the bad choices she makes.

Will you be making appearances for promotion?

I’m hosting a book launch party in Ventura, California, on June 24, which is a time I enjoy giving back to my readers for their support. We’ll have hors d’oeuvres, cupcakes, and wine, and also drawings for prizes, including a handwriting analysis. I’ll give away some transfers of the sugar skull tattoo drawing Erik did for the cover. I considered offering a free tattoo, but I’m not so sure my demographic would appreciate that—though I’m hoping the tattoo theme might draw a younger crowd, too. I’ll also be speaking to a wide variety of organizations, groups, and book clubs. Stuff like that.

Remember the editor who dumped me while I was writing LAST WRITES? That book was originally titled UNHOLY WRIT, but the editor felt it sounded too much like a religious story (it’s about a cult) and changed it. So, not one to walk away from a great title, which I think UNHOLY WRIT is, I’m starting to outline the next Claudia Rose story. I’ll just share this: A couple of months ago, the night before the Sisters in Crime’s Women of Mystery event, I was alone in a fourth floor hotel room. I was doing some Internet research and had just started reading about the SATANIC BIBLE when suddenly my bed began to shake. Then the whole room was rocking and rolling, water sloshing around in the toilet. Not sure whether to be relieved, I realized that I wasn’t experiencing a demonic visitation, but a 5.1 earthquake—it is Southern California, after all. Scared me witless, but it made a good story for my panel the next day. And maybe it will find its way into UNHOLY WRIT.

I understand there’s been a recent development in the series. Can you share it our readers?

My series has been optioned for film and television. Who knows when or whether it will actually get sold, but it’s fun to think about my picks for the main characters. My first preference for Claudia has always been Minnie Driver. For Jovanic, I used to think John Cusack was the one, until I saw Gerard Butler in Olympus Has Fallen. Be still my heart! He is Jovanic.

Can you share your favorite quote for INKSLINGERS BALL?

Sure. Lee Lofland, the author of Police Procedure and Investigation, as well as the founder and director of the Writers’ Police Academy, provided me with a nice one: “Lowe expertly delivers a solid criminal investigation while guiding her readers into a unique culture where tattooing and the murder of a young girl come together on the autopsy table. Hit the lights and siren because this is one fast ride from beginning to end.” 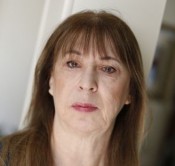 Like her fictional character Claudia Rose, Sheila Lowe is a real-life forensic handwriting expert who testifies in handwriting-related cases. She holds a Master of Science in psychology and provides continuing education for marriage and family therapists. She authored the internationally acclaimed THE COMPLETE IDIOT’S GUIDE TO HANDWRITING ANALYSIS and HAND ANALYSIS OF THE FAMOUS & INFAMOUS, as well as the Handwriting Analyzer software. Sheila lectures around the country and is often seen in the media.