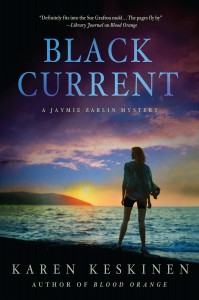 Murder is once again the catalyst for mystery and P.I. intrigue in California as Karen Keskinen’s second novel, BLACK CURRENT, hits bookshelves, both real and virtual, this month. Denise Hamilton, author of DAMAGE CONTROL and editor of Akashic’s LOS ANGELES NOIR called Keskinen’s first book, BLOOD ORANGE, “[a]n impressive debut with echoes of Sue Grafton and Ross Macdonald featuring appealing characters, a twisty plot, buried family secrets, and a coastal California backdrop saturated in color and light.” Fans of that work will surely be eager to get their hands—and, more importantly, eyes—on the sequel, BLACK CURRENT, when it comes out this month.

THE BIG THRILL recently caught up with Karen so she could give us some insight into her latest entry in her mystery series, provide some clues to what readers should expect, and tell us a little about the story behind the stories.

Congratulations on your most recent novel, BLACK CURRENT! Tell us a little about your protagonist, P.I. Jaymie Zarlin, and how this second book picks up after BLOOD ORANGE lets off.

Jaymie moved to Santa Barbara, California, some three years before the events recorded in BLOOD ORANGE. She moved south to try to help her brother Brodie, who was living on the streets. When Brodie died in the downtown jail, Jaymie decided to remain in Santa Barbara and become a private investigator. The focus of her work was to find missing people. But that focus changed when she was hired to discover who’d killed Lili Molina, a Santa Barbara High School student found raped and murdered after the annual Solstice Parade. BLOOD ORANGE is the story of Jaymie’s investigation into Lili’s death and, subsequently, the death of Danny Armenta, a young man falsely accused of Lili’s murder.

In BLACK CURRENT Jaymie is again urged to investigate a murder: this time the death of golden boy Skye Rasmussen, whose body is found suspended in a tank at the Santa Barbara Aquarium. Jaymie, all too human, would like to prove to detractors that her solving of the Solstice case was no fluke. But she also knows Skye’s death is best left in the hands of the local police. It’s only when they insist on labeling the murder an accident that Jaymie decides she must get involved.

Setting is everything! I hope my characters are shaped and imbued by the landscape they live in. Mountains, sea, plants, and animals: nature is everywhere in Santa Barbara, from the dolphins cavorting just offshore to the raccoons tap-dancing on Jaymie’s roof at night. In BLACK CURRENT, the city is gripped in drought. Searing heat is killing trees and shrubs, and the reverberations are registering on up the food chain. The history of the land, the tightly enclosed natural geography of the city, and the beauty of coastal California all help shape the characters and their interactions.

As a writer, I want to keep one finger on the pulse of this truth: what we call setting shapes, sanctifies, and gives life to the characters. It’s an ongoing baptism, in a way.

Speaking of characters, the source of life for any novel, your books present a diverse array of them. Do you find it a challenge to keep track of them and provide each with an authentic, distinctive voice?

Not really. They are so all-fired alive! I’m currently working on the third book in the series, and will admit I sometimes have trouble recalling what the characters did in which book. Their lives are not easily segmented, it seems. I’m not being cute when I say that Jaymie, Gabi, Mike, Claudia, and all the others are real to me now—they sometimes skip, other times stumble, but they move on, like the rest of us.

I’ll tell you what I do have trouble with: leaving certain characters behind when I move from one book to the next. I promise myself (and my readers) that all the “lost ones” are off living their lives, and may pop back into the pages of a book later on.

What do you suppose it is about the detective novel as a literary staple, the private investigator as a protagonist, that makes the form so enduring?

The detective novel, of course, is a form of the hero’s journey—in Jaymie’s case, the heroine’s journey. This structure has withstood the test of time—of millennia, in fact. It’s a gift to me as a mystery writer. My heroine reluctantly takes the call, the quest. She perseveres through great setbacks, conquers demons, and witnesses horrors along the road. In the end her quest is successful, yes—but at the last minute, something we long for is snatched away. That something is the certainty that all is well. We readers, too, are allowed to feel satisfaction and relief, but only to a point: a good mystery reminds us that, in spite of a satisfactory ending, the world remains corrupt.

Are you a big mystery fan in addition to being a mystery author? What kind of books do you find yourself reaching for these days, and has your taste changed since you became a writer?

I love mysteries, and always have a bookmark stuck in one, two, or three of them. Recently I read and enjoyed MURDER AS FINE ART by David Morrell, and A SERPENT’S TOOTH by Craig Johnson. I’m a fan of both writers. I also enjoy Fuminori Nakamura, Denise Mina, and the great Ian Rankin. My favorite mystery writer is Andrea Camilleri. Camilleri combines evil and subversive humor in a way I both enjoy and admire. By the way, all the writers I’ve mentioned write books that braid the sinews of setting into the characters, and through the plot itself.

What are you working on presently? Can you give readers of THE BIG THRILL the scoop on what’s next for you? Will we be seeing more of Jaymie Zarlin in the near future?

Absolutely! These characters are too engaging—and too damn stubborn—to disappear anytime soon. I’m currently working on the third book in the Jaymie Zarlin series. I don’t want to give anything away, but I can tell you that Jaymie, with the help of her Santa Barbara friends, must enter an especially ugly and soul-destroying corner of the world in order to solve the next crime. And you can count on two things: solve it, she will—and to do so, she’ll be required to pay a great price.

Many thanks to Karen for taking the time to shed some light on how she explores the dark territory of an unsolved murder. 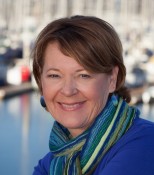 Karen Keskinen was born in Salinas, California. She has also lived in California’s San Joaquin Valley and in Wellington, New Zealand. She now resides in Santa Barbara where she is a full-time writer. Keskinen is the author of BLOOD ORANGE and BLACK CURRENT.