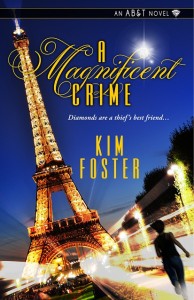 Some writers receive their calling in childhood and chart their course from there. Kim Foster had multiple callings. She grew up reading and writing fiction—her first love. Dissections in biology class prompted her second calling—medical school. Medicine won out. How could it not with the encouragement showered upon her by guidance counselors, teachers, parents, and random street people?

But fortunately for thriller readers everywhere, Foster just couldn’t stop writing. After thirteen years of stitching up people’s lacerations, treating their sore throats, and checking their blood pressure, she signed a three-book deal with Kensington Books. Her first e-book, A BEAUTIFUL HEIST, hit the digital waves in 2013 with A MAGNIFICENT CRIME scheduled for release in June 2014.

As her protagonist Cat Montgomery knows, everyone has a talent. Some are just more legal than others.

A natural-born thief, Cat has a special talent for stealth—or at least she thought so. Years ago, she stole from the diamond-hording businessman Albert Faulkner III, but he somehow figured out she was responsible. Now he wants revenge, and dares her to swipe the elusive Hope Diamond. If she fails the mission, he’ll wreak bloody havoc on her loved ones. But the stakes are raised even higher when Cat discovers that stealing the Hope is not only an impossible task, it’s a cursed one.

Always a sucker for a good adventure story, THE BIG THRILL recently caught up with Foster to ask her a few questions:

Cat is a thief, and a good one. You seem to be intrigued by the criminal element. What made you choose that for her vocation, and how have you researched the field?

I love stories with criminals as protagonists, where you find yourself rooting for someone who would traditionally be the villain. It’s the appeal of the anti-hero—or, in this case, the anti-heroine. I think it’s fascinating to explore what motivates behavior, either good or bad, and all the shades in between. Whether an anti-heroine is tough, ambitious, unforgiving, or morally ambiguous, there’s something compelling about a complicated heroine with nuances—not quite the villain, but certainly not the damsel-in-distress, either.

As for research, it’s amazing the things you can learn online. If I’m not on an NSA watchlist by now, they’re doing something wrong over there. I also have a brother-in-law who has worked as an undercover cop in some pretty crazy situations, so he’s been an awesome resource.

You originally have Cat based in Seattle, but in A MAGNIFICENT CRIME you take her to Paris. Did this just evolve from the plot, or is it your intention to give the books international flavor and have Cat travel?

It was my intention from the beginning to give these books an international flavor. Cat is a professional jewel thief, so I always imagined her assignments could take her all over the world. In the first book she starts in Seattle, but ends up in London, and in the second book she is primarily in Paris, but the story also travels to Geneva, Bangkok, and Monte Carlo.

Your book reads like it was written by someone with an insider’s knowledge of Paris. Have you spent time there, drawn on personal experiences for the setting, or was it all researched?

I’ve been lucky enough to have visited Paris several times. My husband and I own a house in Normandy, just three hours outside Paris, and we go overseas every other year. Setting this book in Paris was a labor of love for me—it’s definitely my favorite city. It has a richly layered history, plus a wonderful literary vibe and café culture. Through my writing, I got to revisit all my favorite spots, plus explore some of the creepier parts of Paris, like the Catacombs.

In A MAGNIFICENT CRIME, Cat’s boyfriend, FBI agent Jack Barlow tracks a fierce criminal known as the Gargoyle, running into Interpol and resistance among his agency as he follows Cat to Paris. How much of a romance element is there in your work? Would you consider your books romantic thrillers?

There’s a strong romantic thread in all my books. As we move through the series, it becomes a more complicated love triangle, and I used that storyline to further dig into the issue of good and bad. Cat becomes torn between two men, one who personifies the hero (Jack, the Fed—although he certainly has his own dark secrets) and another, who represents the criminal element (Ethan, a charming art thief—who is more of a hero than he realizes).

With the theft of the Hope Diamond on the table, you have Cat backed into a corner—an impossible mission and a curse to contend with. How do you plan to top that in your next novel? Can you give us a preview of the third—as yet unnamed—book in the series?

The third book sees things get even more complicated for Cat. She travels even farther afield—to LA, the English countryside, Venice, Singapore, and New York. She’s following the trail of a long-lost ring that once belonged to Richard the Lionheart, piecing together an even older mystery, and struggling with her own moral code, as everything she believes about herself and her profession gets called into question.

I was very interested in your blog. As the author of e-books, you do a lot of promotion on the web. I notice that you have blog spots on Paris and your upcoming book. You also do Pinterest, and I’ll bet you tweet. What is your favorite way to connect with readers?

I love social media for a lot of reasons, and one of them is definitely the connection with readers. Twitter is probably my favorite social media platform, but I also enjoy Goodreads, Pinterest, Facebook, and blogging. I have to be careful to not lose myself down the rabbit hole of social media—it’s fun, but it can be a big time suck. The actual writing has to come first!

Know that you can find Foster blogging about her “left-brain, right-brain mash-up” online. Please check out her website for up-to-the-minute updates and information about her life as doctor, mom, and author, and to keep up with the adventures of Cat Montgomery. If you love high-stakes and thrills, this is a series you don’t want to miss. Pick up your copy of A MAGNIFICENT CRIME today. 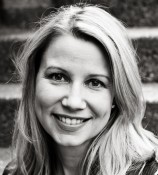 Kim Foster is the author of the Agency of Burglary & Theft series. Kim has a typical background for someone who writes thrillers about thieves and spies: she has a degree in medicine and is a practicing family doctor. (Don’t worry, it doesn’t make much sense to her friends and family, either.) She’s addicted to yoga, loves to travel, and has a clinical weakness for dark chocolate with sea salt. Kim lives with her husband and their two young sons in Victoria, BC, where she’s hard at work on her next book. And drinking a ridiculous amount of coffee.