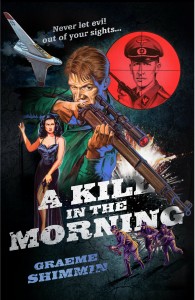 A new twist on history awaits in Graeme Shimmin’s new novel, A KILL IN THE MORNING.

The year is 1955 and something is very wrong with the world. It is fourteen years since Churchill died and the World War II ended. In occupied Europe, Britain fights a cold war against a nuclear-armed Nazi Germany.

In Berlin the Gestapo is on the trail of a beautiful young resistance fighter, and the head of the SS is plotting to dispose of an ailing Adolf Hitler and restart the war against Britain and her empire. Meanwhile, in a secret bunker hidden deep beneath the German countryside, scientists are experimenting with a force far beyond their understanding.

Into this arena steps a nameless British assassin, on the run from a sinister cabal within his own government, and planning a private war against the Nazis. And now the fate of the world rests on a single kill in the morning.

THE BIG THRILL recently got in touch with Graeme to discuss his process and what he has in store for us next.

A KILL IN THE MORNING re-imagines the World War II / Cold War eras and gives us a world where the Nazi regime still exists in the 1950s.   What excited you about this idea and how does it differ from other stories that may have tried a similar approach?

What excited me about writing A KILL IN THE MORNING, was an image I’d had in my head for years of hanger doors grinding open to reveal an amazing super-weapon that I could never quite see. I also had inspiration from all the classic spy novels I’d read. When I started writing, all those ideas just seemed to flood out. About half-way through, I suddenly realized how it had to end and that it was really going to work. I sat back and just thought that “this is the story I was born to write.” It was an amazing moment. I felt like a sculptor, chipping away and finding the sculpture was already there inside the marble.

I was aware that “Nazi victory” had been used as a setting for several alternate history novels, notably FATHERLAND. But in the 1955 of A KILL IN THE MORNING, the Nazis haven’t achieved “victory.” Britain and the Soviet Union are still opposing them, but not in open warfare—instead there’s a three-way Cold War. That gave me a lot of scope to write the kind of classic spy story that was written during the Cold War, but with the Nazis as antagonists, and after all the Nazis are the ultimate bad guys!

As a writer, what elements of the alternative history genre appeal to you the most?

I see it as a way of writing something classic but with a twist. In an alternate world, without real history as a constraint, anything can happen, and that freedom appeals to me. It’s the ultimate “what if…” genre.

Let’s talk about spy fiction.  What do you find most intriguing about the world of spies and how did those elements influence you when crafting this story?

I was brought up reading classic spy thrillers like FROM RUSSIA WITH LOVE, ICE STATION ZEBRA, and THE IPRESS FILE: fast-paced, action-packed and fun. Being a writer of spy fiction gives me the opportunity to write the sort of thing I like to read, and that’s a great privilege.

What are some other influences that have helped or inspired you?

When I was researching A KILL IN THE MORNING, I read biographies of all the real characters who are in the book like Churchill, Reinhard Heydrich (head of the Nazi secret service) and Stewart Menzies (head of MI6 during World War II) and I read a lot of nonfiction about the Special Operations Executive, the British organization that organized sabotage and resistance in occupied Europe. The heroism of the women of SOE was incredible and helped inspire me to write my heroine, Molly Ravenhill.

I’m editing a novel called ANGEL IN AMBER at the moment and hoping to bring that out next year. ANGEL IN AMBER is a thriller set in the near future, with Britain trapped between a feuding USA and Europe. It’s written in the same all-action style as A KILL IN THE MORNING. After that, there will be sequels to A KILL IN THE MORNING. I’ve worked out how the series will continue and I’ve already written the first chapter of the next book.

Graeme Shimmin was born in Manchester, UK, and studied Physics at Durham University.

His successful consultancy career enabled him to retire at 35 to an island off Donegal and start writing. He has since returned to Manchester and completed an MA in Creative Writing.

The inspiration for A KILL IN THE MORNING – his prizewinning first novel – came from Robert Harris’ alternate history novel, FATHERLAND, and a passion for classic spy fiction.

To find out more about Graeme, and read his spy-themed short stories and book and movie reviews, please visit his website.