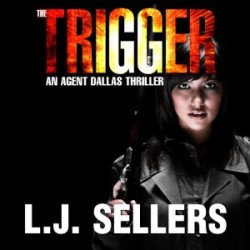 Agent Jamie Dallas loves undercover assignments that get her out of the Phoenix Bureau. But when a woman and her baby disappear from an isolated community of preppers in Northern California, she knows the risk of infiltrating the armed group is dangerously high.

Once inside the compound, she discovers that the brothers who founded Destiny are scheming something far more devious than kidnapping or murder. Meanwhile, her local FBI contact, Agent McCullen, is pulled from her team and assigned to investigate the murder of a woman with phony ID, found at the bottom of a motel pool.

Soon Dallas finds herself in deeper trouble than she’s ever encountered—with no way to reach her contacts. Can she break free of the bunker and stop their bizarre end-of-world plans? Will Agent McCullen identify the killer in time to help?

The Trigger is a gripping story that highlights our greatest fear—how a megalomaniac and a hacker-for-hire can threaten civilization as we know it.

THE TRIGGER is available from Amazon and Audible.

“THE TRIGGER, LJ Sellers’ atmospheric, fast-paced and intelligent thriller, kept me reading long into the night. FBI agent Jamie Dallas, a beautiful woman who plays by her own rules in a man’s world, is one for the ages.” —J. Carson Black, bestselling author of THE SURVIVORS CLUB

L.J. Sellers writes the bestselling Detective Jackson mysteries—a two-time Readers Favorite Award winner—as well as the undercover Agent Dallas series and provocative standalone thrillers. Her novels have been highly praised by reviewers, and she is one of the highest-rated crime fiction authors on Amazon. L.J. resides in Eugene, Oregon where most of her novels are set and is an award-winning journalist who earned the Grand Neal. When not plotting murders, she enjoys standup comedy, cycling, social networking, and attending mystery conferences. She’s also been known to jump out of airplanes.