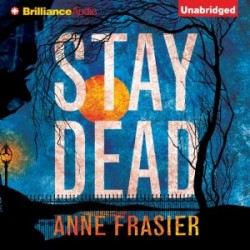 New York Times bestselling author Anne Frasier takes readers back to her dark, enchanting Savannah—a place as terrifying as it is mesmerizing.

Homicide detective Elise Sandburg is traumatized after her run-in with a madman the press has dubbed “The Organ Thief.” As Elise takes refuge in her deceased aunt Anastasia’s abandoned plantation to investigate and recover from her ordeal, she begins to question everything—from her dangerous line of work to her complex relationship with her handsome, tortured partner, David Gould. But with a madman on the loose, and her mother’s claims to still hear from Aunt Anastasia, she may have more immediate problems on her hands. In Elise’s world, where cold hard crime mixes with the local Gullah culture, nothing is ever what it seems, and no one is above suspicion—not even the dead.

STAY DEAD is available from Amazon and Audible.

Anne Frasier is a New York Times and USA Today bestselling author of twenty-five books and numerous short stories that have spanned the genres of suspense, mystery, thriller, romantic suspense, paranormal, fantasy, and memoir.  During her award-winning career, she’s written for Penguin Putnam, Simon & Schuster, HarperCollins Publishers, Bantam Books/Random House, Silhouette Books, Grand Central Publishing/Hachette, and Thomas & Mercer. Her titles have been printed in both hardcover and paperback and translated into twenty languages.

The Trigger by L.J. Sellers