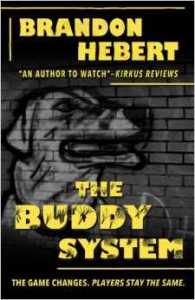 Brandon Hebert, author of MY OWN WORST ENEMY and ODD MAN OUT, really delivers with his newest novel, THE BUDDY SYSTEM. It’s a gritty, New Orleans-style cop tale with a comic edge. Brandon unites the two elements together seamlessly. It might have something to do with his Louisianan roots or maybe it’s his sharp intellect. Either way, he’s talented and incredibly humble about it. Brandon’s from a sleepy town in southern Louisiana, where he lives with his wife and three dogs: Lucy, Lily, and Lola. When he has free time you can find him fishing with his dad and spending time with family and friends. For those of you who have yet to have the pleasure of reading his work, do yourself a favor and pick up THE BUDDY SYSTEM.

THE BIG THRILL recently caught up with Brandon who agreed to answer a few questions.

Tell us about THE BUDDY SYSTEM.

THE BUDDY SYSTEM is about two cops and a small time drug dealer that use each other to further their respective career paths in post-Katrina New Orleans.

N.O.P.D detectives Jack Hardy and Early Moore are under a lot of pressure to rein in violence on the streets. They decide to let one of their favorite snitches, local drug dealer Lamont Brown, do some of the heavy lifting and name names on a wiretap unit they’re assigned to. They get the prestige of multiple busts and Lamont can rid himself of the competition.

To quote one astute reviewer: Things go right for about five minutes.

The book has been called “a New Orleans take on The Wire” with “a comic edge.” Going a little further, I always approach my stories from a relationship vantage point. They’re really about the human experience. Jack and Early’s redemption. Lamont’s retribution. Their uneasy friendship which will ultimately be based on some level of mutual respect, however begrudging it may be. Those are emotions we can all relate to. Crime just happens to be the backdrop because it’s interesting to put these people in those situations.

You create characters that truly come across as real. Where did you get the inspiration for your characters?

The dialogue comes from listening. You have to listen to the world around you. My books are filled with chiselers, hustlers and wannabes, people on the outskirts of society. Lucky for me, as it turns out, I’ve met quite a few of those folks through different life experiences. People don’t talk in complete sentences, like you were taught to write in high school composition. Don’t write like that if you want some form of legitimacy. Write what you know.

I think most people, writers included, are informed by the world around them. Lamont is largely based on the slick-talking, street-wise con man that we’ve all seen in movies. I love that kind of character. When I write, I envision the book playing out as a movie. I think a lot of writers do that. I don’t see how you cannot envision something in your head when you’re putting it on the page. That said, the inspiration for Lamont came from people like Eddie Murphy (especially his early movies like 48 Hours and Beverly Hills Cop), Chris Tucker or Martin Lawrence. If some readers don’t recognize those names or movies it’s because I’m old.

What is the biggest struggle you have when writing your books?

The middle of a book. Beginnings and endings write themselves. The first act—the setup—is actually my favorite part.

Middles are tough, though. Out of a 320-page manuscript, you’ve got to fill the second act with 260 pages. That can be difficult. That’s why I rarely read books over 300 pages, like a Tom Clancy novel (that usually clocks in around 700 pages!). He’s a great writer and his early books are fantastic, but there’s a lot of filler in those pages.

So, I’ve decided to follow the sage advice of my foremost influence, the late great Elmore Leonard: “Leave out the parts that readers tend to skip.”

Do you have any hobbies, interests, passions besides writing?

A few. I like to golf…kayak…go fishing. I live a pretty sedate life. I’m a big reader, mostly non-fiction, and World War II and Cold War history in particular. I was in naval intelligence another lifetime ago, so the espionage angle of those topics hold a special interest.

Any message you would like to leave for future writers?

Be persistent. This is an extremely competitive business and there will be disappointments. I could probably wallpaper my entire home with the amount of rejection letters I’ve received. If you’re easily discouraged, it’s not for you. If writing becomes part of you—and if you’re dedicated, it will—you will work through the frustration.

I’ll be finished with my next novel, CHARLIE KRAMER AND COMPANY, later this year. If I had to give an elevator pitch, I’d say its Ocean’s Eleven meets Our Man in Havana.

A Las Vegas casino developer and a deposed Cuban army colonel conspire to use Fulgencio Batista’s rumored half a billion dollar fortune to open casinos in Cuba when the Castros eventually cede power.

Or defraud their other investors.

A gentleman thief and his crew plan to make off with it before anyone has a chance to find out. 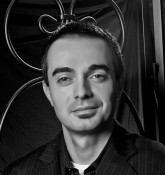 THE BUDDY SYSTEM is his third novel. His first, MY OWN WORST ENEMY, was named to Kirkus Reviews’ Best Debut Fiction of 2010 list. His second, ODD MAN OUT, was hailed as a “combustible atmosphere” and “three-course banquet of felonies.”

To learn more about Brandon, please visit his website.