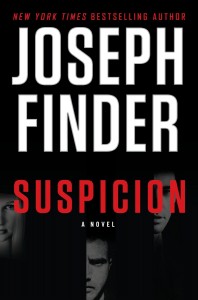 The entertainment industry overflows with books, movies, and television shows that portray mothers as fierce lionesses, the great protectors of the child.

Joseph Finder’s newest thriller, SUSPICION, isn’t that book. Instead, Finder explores the inextricable bond between a single father and his daughter—and how a choice made out of desperation can provoke unspeakable consequences.

“There really hasn’t been enough written about fathers and daughters,” Finder says, admitting that he drew inspiration for this book by thinking about how far he would go to protect his own daughter. “It provided some powerful motivation.”

And a unique high stakes environment ideal to launch his first stand-alone novel under a new publishing umbrella, a bit of a departure from the bestselling “Nick Heller” spy thrillers for which he’s known.

“There are certain stories you can’t do when you’re writing a series character,” Finder says. “For instance, you can’t put your hero in jeopardy for his life— readers don’t believe it. They know the character is part of a series and that he can’t really die. But in a stand-alone novel, anything is possible.”

Fundamentally, SUSPICION is the story of an ordinary man doing extraordinary things—unlike Heller, the protagonist isn’t a private spy with elite skills and this isn’t a book about espionage. In fact, Danny Goodman is a struggling writer.

“For a long time I worried that making my protagonist a writer would be boring,” he says. “In this book I was able to engage in social commentary and humor and the things I love to read about as a reader.”

He was also able to explore the crazy pressure put on teens to get into college these days, and look at it as an aspect of a thriller. Because, as Finder notes, a great thriller doesn’t necessarily have to center around a superhero or global disaster. “High stakes” is the key element of the genre—which can be as simple as putting one ordinary person’s life at risk.

“Human beings have always wanted to engage in something high stakes and risky,” he says. “But most of us don’t want to risk our lives being a hero. When we read a thriller, we’re doing something very exciting—without being killed.”

An interesting and refreshing perspective from someone trained in intelligence.

“I read a lot of books and go, ‘man, that’s great,’” he says, pointing to well crafted novels by Ken Follett, Scott Turow, Gillian Flynn, and Stephen King. “I don’t have time to be envious. You can approach it two ways. You can either think, ‘what’s the point?’ or, you can be inspired.”

That’s the road he chose.

Although Finder kind of always knew he wanted to be a writer—someday—the transformation from academic to published author happened within a three-year period. An avid reader, Finder often finished a book with the feeling that he could or should write his own. Finally, his then girlfriend (now wife) suggested he stop talking—and start writing.

“I gave myself three years,” he says. “In order to make it as a writer, you have to be stubborn because the world puts out all kinds of obstacles.”

Keeping his self-imposed deadline in mind, Finder researched, wrote, rewrote, landed an agent and found a publisher all within…three years.

“Every writer I know at some point had to be obsessed,” he says. “They took a leave from their day job—put the writing time in.”

Which is pretty fantastic advice. While Finder’s website offers all kinds of tips and tricks for aspiring scribes, he always comes back to one key piece of wisdom—just write.

Finder’s writing takes place outside of the home in an office with an impressive desk covered with inspirational and motivational gadgets—from the hourglass he uses to time personal writing sprints, to the bobble-head figurine bearing his likeness and the ever-full cup of espresso (or Diet Pepsi), Finder’s workspace is an eclectic mix of things that help him connect with his writing.

SUSPICION is Finder’s eleventh novel, and while it will introduce him to new readers, fans of his Nick Heller series need not worry. He plans to return to that beloved character in full novel form soon.

But for now, readers can look forward to a short story he co-wrote with New York Times bestselling author Lee Child for the International Thriller Writer’s FACEOFF anthology. Heller and Child’s Jack Reacher character are paired off in some mysterious way—sorry, no teasers.

SUSPICION launches May 27 from Dutton. For an amazing 10-chapter sneak peek, or for more about Joseph Finder (including a snapshot of his very cool writing desk) check out his website. 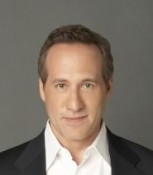