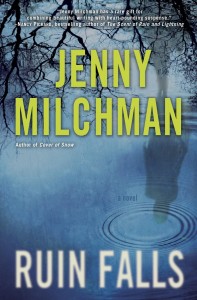 Jenny Milchman’s debut novel, COVER OF SNOW, received starred reviews from both Booklist and Publishers Weekly. The Associated Press said, “The first-person account told from Nora’s point of view thrusts the narrative full force into horror, sadness and every other emotion Nora experiences as she must start over without Brendan…[W]hat makes Cover of Snow sing is Milchman’s ability to make readers care for Nora as she suffers and starts anew.”

Her latest, RUIN FALLS, is also receiving accolades. RT Book Reviews said, “Milchman has a gift that allows her to delve deep into the mind and psyche of her characters, and fans of dark plots like the works of Gillian Flynn will find another author to savor.”

Milchman is on the road promoting RUIN FALLS, but took the time to chat with THE BIG THRILL.

What sparked the idea for RUIN FALLS?

One night when I was on the road—and readers of THE BIG THRILL might know that I tend to go on the road for a verrrry long time—we arrived at a hotel and were lucky enough to get upgraded to a suite. (Because I go on tour with my whole family—husband working from the front seat, kids “car-schooled” in the back—a suite is a treat. It can get cramped in a car!) Anyway, I was tucking the kids into the sleeper sofa bed when it occurred to me that in a suite, the children sleep beside the exit door, while the parents are a whole room away. This suddenly struck me, in the eerie way of late night arrivals and the disorientation of travel, as extremely scary. I knew that I would have to write a novel that involved a mom sleep-stumbling her way into the outer room of the suite…and not finding her children there. Now, because of the kind of writer—and person—I am, I also knew that the children would have to be safe all along. The mom and the reader would know this. So the suspense in RUIN FALLS derives not from whether the kids will be okay, but from how their mother will get them back.

Speaking of your travels, could you talk a bit about how you promoted your first novel and what you are doing for RUIN FALLS?

Ah! That brings us right to the subject of the world’s longest book tour. I don’t know that this was conceived as a promotional effort, but after taking thirteen long years to get published, the thing I most wanted to do was get out there and connect with readers, writers, authors, booksellers, librarians, and other people who had supported me along the way. I’m also a big believer in the importance of face-to-face in a virtual world. So my husband and I rented out our house, traded two cars in for an SUV that could handle Denver in February, and withdrew the kids from first and third grades. We visited over 400 bookstores, libraries, book clubs and schools, spending seven months and 35,000 miles on the road. It was magical enough that with my new novel just released, we’re heading out again.

A theme in both of your novels is families with secrets. Why?

That’s a good question. I suppose the pithiest—and truest—answer is because secrets are fascinating, the hidden terrain of our lives…and every family has at least one.

How do you write so your characters emotionally captivate the reader? You have a gift!

Well, first of all, thank you, what a terrific thing to say. And second of all, I don’t know. I’m sort of joking…but really I’m not. I wouldn’t have even known that about myself as a writer, let alone be able to explain it. I guess I feel that writers all have different things they do well. Lee Child can describe the workings of a gun in a way that makes me—the most non-mechanical person you could hope to find—riveted and glued to the page. Stephen King can connect our deepest buried basement fears to the question that truly lies beneath (mortality). Nancy Pickard can turn a flat landscape into a scene thrumming with electricity and pounding with thunder. How do any of these authors do that? And perhaps more importantly, why? I don’t have an answer for them, and I don’t have one for myself. I only know that I’m glad you feel connected to my characters. I do, too.

What are the pros and cons of writing standalones vs. a series?

In some ways, my novels are a series, but I don’t want to say how just yet. I’d rather hope that you would read my next book and let me know what you think. Till then, I’ll say that you’re right, COVER OF SNOW and RUIN FALLS can be read on their own, either one before the other. And I guess the advantage of that is flexibility and discoverability…it doesn’t matter which book jumps into a reader’s hands (or onto their device) first. But I love series, and admire writers who can produce them. Reacher is a favorite of mine, as you’ve probably guessed. I also love Louise Penny’s series, which makes use of a provincial Canadian setting as part of the story that carries us through. Julia Spencer-Fleming does a similar thing, and her townspeople are a cast of characters. When a series lasts a long time, there’s a feeling of coming home when a new book appears. You’re arriving at a family member’s doorstep, which I imagine must be as satisfying to the author as it is to her readers.

So glad you asked. Well, what’s immediately next is that I am out on another world’s longest book tour—4 months and 20,000 miles—and will hope to meet THE BIG THRILL readers along the way. (For the first 2000 miles, ITW author Carla Buckley will join me, so please come find us both!) And then my third novel, HARD TIME, comes out next year.

On the first leg of Jenny’s 20,000 miles, Jenny and acclaimed novelist M.J. Rose reported in to THE BIG THRILL about their joint book launch event at The Mysterious Bookshop in New York. Here’s what they had to say:

Jenny: It’s not every day that an author gets to launch a book. For some it’s a once-in-a-lifetime experience. So far I’ve been lucky enough to celebrate the release of my debut novel and my follow-up at The Mysterious Bookshop in lower Manhattan. And the event for my second novel was made even more special because author M.J. Rose, whose work I’ve been a fan of since her first, ground-breaking novel, joined me.

How to describe a book launch? Some people say that we authors think more about the shoes than the book. I’ll admit that I tried to find just the right dress. But it really was about the books. To a packed house—and The Mysterious Bookshop is a pretty expansive space—M.J. and I described our wildly different writing processes. (Two words: Gregorian chants). Our editors and publishers and publicists were there to support us. I don’t know if either of us wined or dined much, but the guests ate finger snacks and filled goblets.

And all I could keep thinking, as the night drew to a close, was that I hope I will get to be here again when my third book comes out.

M.J. Rose: It never gets old. The only difference between the book launch for my fourteenth book and the launch for the first book was nerves. I’m much calmer now. But the thrill? It’s even bigger since staying alive in the biz and getting to publish year after year is harder than ever.

This year my launch at the Mysterious Bookshop was made even more delightful and special because I shared the evening with Jenny Milchman who is one of the most impressive authors I know. Not just because of her amazing storytelling but her amazing stamina, creativity, and energy. Not to mention her crazy supportive family. Who else goes on book tour for months? And months? And months? Who else has her mom cook ribs for the launch?

The event was made even more special for all the other authors who came to cheer us on, from ITW members Lee Child, Carla Buckley, Nancy Bilyeau, Kira Peikoff, to friends from other genres, Linda Francis Lee, Liz Flock, Stephanie Cowell, Christina Baker Kline and more.

The stars were certainly burning bright and we appreciated it so very much!!

Jenny Milchman is a suspense writer who until recently lived on the road with her family on what Shelf Awareness called “the world’s longest book tour”. She has come to settle in upstate New York. For now anyway.

Jenny’s debut novel, COVER OF SNOW, was published by Ballantine/Random House in January 2013, earned starred reviews from Publishers Weekly and Booklist, as well as praise from the New York Times, San Francisco Journal of Books, the AP, and many other publications. Jenny’s second novel, RUIN FALLS, will be published by Ballantine in April 2014 and is available for pre-order now. Her short story The Closet was published in Ellery Queen Mystery Magazine in November 2012. Another short story, The Very Old Man, will be published by EQMM this year, and the short work Black Sun on Tupper Lake appeared in the anthology ADIRONDACK MYSTERIES II.

Jenny is the Chair of the International Thriller Writers Debut Authors Program, and the founder of Take Your Child to a Bookstore Day, which was celebrated by over 650 bookstores in all 50 states and four foreign countries in 2013.