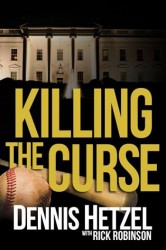 I want to tell you what happened to me as I wrote KILLING THE CURSE.

The book’s starting premise is this:

The Chicago Cubs haven’t won a World Series since 1908. Baseball fans everywhere know that the team is cursed, most famously by the “Billy Goat” incident during the 1945 World Series in which a pet goat was refused admission and its master, Billy Goat Tavern owner Billy Sianis, put a curse on the Cubs. The Billy Goat Tavern also was a legendary Chicago media hangout and the setting for the “chee’burger, chee’burger” skits in the early days of Saturday Night Live.

There are many more humorous and legendary tales of grief and heartache involving the Cubs—consider black cats, Gatorade spilled on a first baseman’s glove that perhaps caused a critical error in a playoff game with the San Diego Padres and the immortal Steve Bartman. (If you need an explanation of the meaning of Bartman, don’t worry. Either Google him or move on.) In my fictional World Series, the Cubs lose Game Six in a very Cub-like way, involving a swarm of gnats.

The Cubs are the most iconic and memorable symbols of failure and frustration in the world of sports. They have millions of loyal, frustrated fans.

So, I wondered, what would happen if there was a twisted and skillful fan—remembering that “fan” is shortened slang for “fanatic”—who would do anything to ensure they would break the curse and win baseball’s World Championship? Anything. And what if the threat was so grave that the Series might have to be fixed to guarantee the Cubs would win?

Using that as a starting point and channeling lots of support from my friend and ITW author Rick Robinson, I began work about five years ago on what became KILLING THE CURSE, which will debut May 29th at the Book Expo America show in New York.

Slowly the story fleshed out. In the first chapter, the father of Boston’s star pitcher dies mysteriously in Idaho, just before his son is set to pitch the penultimate game of The Series.

The book’s main character is an egotistical sports-radio talk show host with a beautiful daughter who tends bar in Chicago’s Wrigleyville neighborhood and helps her dad with his show. Bob Walters is known as “the man Cub fans loves to hate.” I imagined him as what Rush Limbaugh might be like if Rush just did sports talk.

Walters grew up in suburban Palatine, Illinois, and his boyhood friend is the current President of the United States, Luke Murphy, a passionate Cubs fan. They share childhood secrets that emerge again during the World Series and threaten to destroy Murphy’s career and endanger many lives.

It’s basically a three-day story; albeit with some flashbacks, back stories and an epilogue. It starts at the end of Game Six, goes through a day of rain delay and ends at the conclusion of Game Seven.

In all modesty, I think that’s a decent premise and structure for a thriller. The sports-politics blend made it a challenge, though. I was trying to stick my feet into two genres without getting spread-eagled.

I felt strongly that “Curse” must work as both a sports novel and a political thriller. It would have been easy to overdo the baseball material. I wanted to tell the story in such a way that a non-baseball fan would appreciate the sports aspects as an integral part of a larger story. In other words, I wanted to write a book you would enjoy even if you have never heard of Steve Bartman or the Billy Goat.

As an experienced journalist in past lives, I was fairly confident about my basic writing skills and comfortable with the book’s settings where, after all, I came of age: Chicago, its suburbs and even my college town—Macomb, Ill. As a first-time fiction writer, however, I realized quickly that I under-estimated the challenge of plotting. A thriller plot is a three-dimensional puzzle. It isn’t good enough for the puzzle pieces to fit. You must make smart choices about what pieces you let the reader find and when they find them. (And, you might even finish the story with a few pieces missing.) Rick in particular pushed me not to get hung up on plot dilemmas. Sooner or later, he coached, a solution would come; the rough edges would smooth out.

Then, as I kept writing, I discovered something that more experienced authors already know—if you put your heart into a book, it becomes a journey and a very personal thing. I expected to clinically tap into my own knowledge as a handy vein of source material. As I drew upon personal experiences and scenes from my life, I never planned to freshly open personal baggage and expose the emotions of long-forgotten or ignored moments.

A number of scenes in the book were deeply grounded in my personal reality. For example, there was the day my male, sixth-grade teacher broke down in tears after JFK was assassinated. There were scenes involving Bob Walters’s struggles with alcoholism that hit close to home. The scene of a World War II veteran father talking to a son about the futility of going to Vietnam also came from personal experience.

When I finished, I realized my simple thriller about the Cubs evolved into something more—at least for me. I want my readers to enjoy it in any way that suits them, of course, but I hope at least a few figure out that, in the end, it’s a plot framed by a baseball team but a story about Bob Walters, a very flawed guy who doesn’t always understand how much redemption he needs. That describes a lot of us.

If you stay aloof and emotionally distant from your writing, you have a story without a soul. I discovered that by accident. I’m so thankful for the journey.

KILLING THE CURSE is Dennis Hetzel’s first published fiction. He began his career as a newspaper sports editor in the Chicago suburbs and has been a reporter, editor, general manager and publisher at several newspapers, including the Cincinnati Enquirer and the York, Pa., Daily Record, where he was editor and publisher for 13 years.

The Chicago native has won awards for writing, industry leadership and community service, and taught journalism at Penn State and Temple universities. He is executive director of the Ohio Newspaper Association in Columbus, Ohio. He roots for the Cubs and plays his guitar whenever he can.

To learn more about Dennis, please visit him on Facebook.