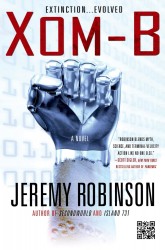 Bestselling author Jeremy Robinson has become one of the most prolific thriller writers in the world, publishing fourteen books in 2013 alone.  His newest novel, XOM-B, has been described as “drawing on elements of The Wizard of Oz, Star Wars, and Sam Raimi’s Evil Dead movies” and proceeding “at a nonstop pace as former slaves survive one cliffhanger after another.”  From an author who effortlessly blends the worlds of action, adventure, sci-fi, and horror, XOM-B puts a “fresh twist on the zombie apocalypse.”

Freeman is a genius with an uncommon mixture of memory, intelligence, and creativity. He lives in a worldwide utopia, but it was not always so. There was a time known as the Grind—when Freeman’s people lived as slaves to another race referred to simply as “Master.” They were property. But a civil rights movement emerged. Change seemed near, but the Masters refused to bend. Instead, they declared war. And lost. Now, the freed world is threatened by a virus, spread through bites, sweeping through the population. Those infected change—they are propelled to violence, driven to disperse the virus. Uniquely suited to respond to this new threat, Freeman searches for a cure, but instead finds the source—the Masters, intent on reclaiming the world. Freeman must fight for his life, for his friends and for the truth, which is far more complex and dangerous than he ever imagined.

Tell us about XOM-B in one line.

In a near future, post-apocalyptic world populated by freed slaves, a man named Freeman must prevent the return of “the masters” while fending off hordes of zombies and killer robots.

What kind of research did you conduct for XOM-B?

That’s a really tough question to answer, mostly because the answer will give away all sorts of cool story elements. Let’s just say I did a LOT of research in the fields of virus’s, extinction events, robotics, computer programming and all sorts of medical, military and personal technology that’s right around the corner.

I keep regular work hours, Monday through Friday, 9am to 5pm. Unless there is a looming deadline or book release conundrum. In those cases I’ll work at night, too, but weekends are pretty untouchable because I want to spend time with my wife and kids. During my work day, I tend to take care of all the non-writing duties: marketing, cover design (I do most of my own covers), website updates, social networking, e-mails, interviews, etc…in the morning. Then I write in the afternoon, writing 1 to 2 chapters in four hours, depending on how well the story is flowing.

Experiment. What works for one author might not work for you. Try everything you can think (aside from the most expensive options, like print ads, which rarely help). The only way to find out what works best for you is to try everything and see what happens. That said, what works and what doesn’t could change from book to book and year to year. What worked for me five years ago isn’t even on my radar now. Flexibility and creativity in marketing are key.

Most of my non-writing time is spent with my wife, kids, and golden retriever, Kenobi. Actually, Kenobi is by my side most of the day. But, when I’m not with the fam, or writing, I’m a gamer. I most frequently play in the Call of Duty, Battlefield and Left4Dead universes, but lately I’ve been playing TitanFall, which is fantastic, but I’m kind of horrible at it, which is unusual for me.

Don’t spend a lot of time describing every detail. Of anything. Not only is it boring and slow, but long descriptions feel like a noose around my imagination. The first few times I come across a long description, especially of something common, like a car, I’ll skim past it. If it keeps happening, I’ll put the book down and likely stop reading the author. I want to get lost in the plot and the characters, not know every detail of a machine, building or landscape. And I don’t think I’m alone. Despite me trying to keep descriptions down to a vivid line or two, I’m often complimented on how well I paint a world. I think this is because I give readers just enough to stoke their imaginative furnaces.

The books I most enjoy (reading and writing) are apocalyptic or post-apocalyptic stories and thanks to my Kindle, I’ve been reading a lot of indie authors, enjoying the variety and often experimental nature of the stories. Granted, many turn out to be unreadable, but I’ve also discovered some new favorites, including The Survivalist series by Arthur Bradley. Currently, I’m reading THE PURGE OF BABYLON by Sam Sisavath. In terms of influence, the two authors who influenced my writing and career are James Rollins, who has been an amazing support over the years and Jeff Long, who wrote my favorite novels, THE DESCENT and DEEPER. Both have inspired my storytelling and given me writing and career goals to strive towards.

Some publishers are very cool. Well, at least mine is. I’ve heard plenty of horror stories about authors having no input into cover designs, of being prevented from self-publishing on the side, and of getting ditched as soon as the numbers don’t look good. None of this turned out to be true for me. I’ve given input on covers, helped design a few and did the Xom-B cover 100% on my own (paid). I self-publish a LOT of books every year, with my publishers full support, and when sales of my fist series weren’t great, I wasn’t kicked to the curb. Instead, we shifted focus to solo books and sales have doubled every year since. Honestly, after all the horror stories I’ve heard, I wouldn’t expect any of this, but some publishers and editors kick ass.

Write like mad and don’t stop. Don’t expect your first novel to be an amazing success. Don’t expect to start writing and be famous a year later. I wrote, full time, making NO money for nearly thirteen years before making a living as a writer. If you’re not willing to put in that kind of commitment, don’t bother. I’m not saying you’ll have to. I was a horrible writer when I started. You might be better than horrible. But you have to at least be willing to give up other parts of your life in order to fulfill your dreams.

Jeremy Robinson is the Amazon.com bestselling author of more than forty novels and novellas including PROJECT MAIGO, ISLAND 731, SECONDWORLD, and the Jack Sigler thriller series including PRIME, PULSE, INSTINCT, THRESHOLD, RAGNAROK, and OMEGA. Robinson is also known as the bestselling horror writer, Jeremy Bishop, author of THE SENTINEL, THE RAVEN and the controversial novel, TORMENT. His novels have been translated into eleven languages. He lives in New Hampshire with his wife and three children.