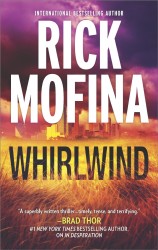 International bestselling author Rick Mofina is known for delivering intense suspense and stories with emotional impact.  In his latest, WHIRLWIND, investigative reporter Kate Page joins the search for a baby who vanished in the arms of a stranger following a devastating tornado near Dallas, Texas.

RT Book Reviews declared WHIRLWIND a Top Pick and said, “Another stellar read that demonstrates Mofina’s one of the best thriller writers in the business.”

What sparked the idea for WHIRLWIND?

No one incident sparked the idea. It came to me when I cast back to some of the toughest moments I’ve ever faced during the years I worked as a news reporter. I was often parachuted into the lives of people at the most difficult times in their lives, often during natural disasters. I’d talked to many people, who’d suffered horrible losses. As I considered the enormous emotional toll, a fictional story began to take shape. I imagined a young wife and mother of two small children, already facing hard times. I saw her at the moment she’d accepted a kind stranger’s help to protect her baby boy as a killer tornado rips through a Texas flea market. But in the aftermath, that mother can’t find her son or the woman who’d been holding him. Then I imagined a reporter, a single mom herself, discovering this tragedy at a time when she’s fighting for her job and trying to hold her life together. I envisioned her vowing to find the truth behind the baby boy’s disappearance, no matter where it led, no matter the cost. I saw their stories, and those of others involved, coming together in a whirlwind of forces so powerful that it surpassed all of their fears and changed them all forever.

Your past few novels have dealt with family and loss.  Why?

This goes back to the first question. Some of the most heartbreaking moments I’ve ever faced were during the years I worked as a news reporter. I’ll never forget a grieving mother showing the press a postage-stamp sized school photo of her son taken the day before he was killed in a hit-and-run accident. And I’ll always remember interviewing a mother hours after she’d watched her toddler daughter get run over by a car before her eyes. She told me her faith would help her; that her little girl had chased a butterfly onto the road, that God was calling her. Tragic loss, which most everyone has endured, has haunted my fiction. There are no higher stakes. There is no greater toll.

You write the world of newspaper reporting.  Where do you see the industry in five years?  Can it survive?

Who knows if it will survive. With print editions falling, like leaves off a tree in autumn, the industry is undergoing an unprecedented metamorphosis. My children regard the print edition of a daily newspaper as a relic, something from another time. Most everyone today gets their information from a screen. We just cancelled home delivery of our local paper, something I mourn. That said, news gathering is still very much a physical, vital pursuit. Online editions are still evolving. The question leaves much to debate and much remains to be seen. However, the craft will always be in my blood, for news reporting is one of the purest forms of story telling.

Was WHIRLWIND the start of a new series?  Do you prefer writing standalones or series novels?

Yes. It launches the series featuring Kate Page, a single mom, with a daughter. Kate is struggling in the ever-changing world of journalism, while secretly searching for her sister, who vanished years ago.

When it comes to series vs. standalones, I like writing both. Of course, there’s the comfort level with series, you’re familiar with your character’s life but I really enjoy upsetting it with a new story, to take the series into new territory. With a standalone, you’re free to do whatever you want and as challenging as that can be, it’s also very liberating.

I’m working on the next book in the Kate Page series. Then possibly a standalone. I just completed THE ONLY HUMAN, a YA thriller set in New York written under a pseudonym. It should be released as an eBook in April.

Rick Mofina is a former journalist and an award-winning author of several acclaimed thrillers. His reporting has put him face-to-face with murderers on death row in Montana and Texas. He has covered a horrific serial-killing case in California and an armored car-heist in Las Vegas, flown over Los Angeles with the LAPD Air Support Division and gone on patrol with the Royal Canadian Mounted Police near the Arctic. He has reported from the Caribbean, Africa and Kuwait’s border with Iraq. His true-crime articles have appeared in the New York Times, Marie Claire, Reader’s Digest and Penthouse.