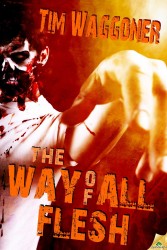 Tim Waggoner has been a fixture in the horror community since around the time people started realizing there was one.  The author of numerous novels and three collections, Tim has more than one-hundred short story publishing credits to date in the horror, fantasy and thriller genres and shows no sign of slowing down any time soon.  THE BIG THRILL caught up with Tim to discuss his latest novel, THE WAY OF ALL FLESH, slated for release this month from Samhain Publishing, and he was kind of enough to answer some questions about the book and his take on writing in general.

Congratulations on your latest novel!  Please tell us a little about THE WAY OF ALL FLESH.  How did this particular novel, this story, come about?

The seed for the novel was planted in 1994, when I first heard the Cranberries’ song “Zombie.” The refrain “What’s in your head, zombie?” got me thinking. What, if anything, goes on inside the head of someone who’s become a zombie? Is there any remnant of the person they once were? And if so, what’s it like to be trapped inside a rotting shell that’s ravenous for human flesh?

The idea stuck with me for the last twenty years, and it became the basis for the story of David, a man who finds himself trapped in a nightmarish, distorted version of his hometown, which is overrun with insane cannibals and ivory-fleshed, fast-moving demons who seek to kill him. It’s also the story of his twin sister Kate, one of a group of human survivors who hunts zombies and can’t escape the feeling her brother is still somehow alive. And it’s the story of Nicholas, a serial killer who hates having been “upstaged” by the zombie apocalypse.

I love playing with tropes and putting new twists on them, and that’s exactly what I did with this novel. I guarantee it’s not like any zombie novel people have ever read before!

By any measure, you’ve been a prolific author over the last decade plus.  Writing demands a combination of work and habit.  What’s your normal writing “routine”?  Did you stick to it for this book, or deviate at all?

I’m an English professor and I’m a father, so I fit my writing in wherever I can. I usually write a few hours a day, often at a coffee shop. I like to have a certain amount of noise and activity around me. For some reason, it helps me concentrate. But it needs to be activity that doesn’t demand my attention. No spouse, no kids, and no students! I wrote most of THE WAY OF ALL FLESH at coffee shops, sometimes on my laptop, sometimes by hand in a notebook, and I typed the text into my computer later. I’ll switch between composing on the computer and by hand whenever I feel like it, whichever seems to make the words come more easily.

Most of us with experience writing horror would agree that good writing is good writing, regardless of genre.  But do you think horror writing presents its own sets of challenges?

I think so. Mood and atmosphere play a huge role in creating the sense of dread that really good horror needs, but you also have to make sure to keep the story moving without getting bogged down in description and exposition. Horror is all about fear of the unknown, so you need to make sure to avoid the familiar—and that includes familiar tropes and story structures. Horror should never be safe, so you have to keep your readers off-balance throughout a story, but without frustrating them. In many ways, writing horror is like walking a literary tightrope.

I’m sure you’re often asked about characters and plot, but I’d like to talk about the motor that flips those pages in the reader’s hands—tension.  What’s your philosophy on maximizing tension?  Do you find the tension levels expected in horror are difficult to maintain in a novel-length work?

I think of horror—my horror, anyway—as a fusion of mystery and suspense. So exploring that mystery and using the techniques of effective suspense are important, but they don’t mean anything unless you present characters readers care about, especially in novel-length fiction. Readers might be willing to read a short story that’s based on a clever idea but which doesn’t have sympathetic, developed characters. But over the long haul of a novel, it’s the characters that keep readers engaged, and seeing those characters threatened is what creates the greatest tension and keeps readers reading.

Tell us about how you discovered novels, and when you had the first inklings you wanted to write them.

My father was—and is—a voracious reader, and there were always books lying around our house. Mostly science fiction and fantasy, but every once and a while there would be a horror novel in the mix. I started picking up whatever books looked good to me and reading them. I’d talk to my dad about them afterward, and soon I started choosing books of my own when we went to the library or the bookstore. I also read a lot of comics, and I wrote and drew an amateur comic in junior high, featuring myself and my friends as a group of cyborg superheroes called “The Bionic Team.” Eventually, I started writing prose stories and completed my first forever-to-remain-unpublished-novel when I was nineteen. Thank God you couldn’t self-publish so easily back then, or I might have uploaded that first book to Amazon and it would still be around to haunt me!

Being a writer means being a reader.  What are the some recent novels you’ve read?  What are you reading at the moment?

What kind of works in progress do you have going on?  What does Tim Waggoner have in store for readers in the future?

I’m currently finishing a novel based on the GRIMM TV series called GRIMM: THE KILLING TIME. After that, I have to get started on the sequel to my urban fantasy NIGHT TERRORS, and then after that I have a couple new horror novels to finish for publishers, one for DarkFuse Books and one for Samhain Publishing.

THE BIG THRILL thanks Tim Waggoner for joining us and sharing his thoughts.  Be sure to check out THE WAY OF ALL FLESH, coming this month.  You can learn more about Tim and his fiction on his website. 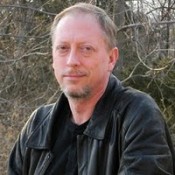