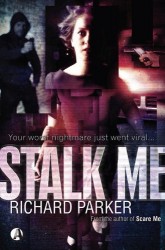 Your worst nightmare just went viral. After being involved in a road accident and assault, Beth Jordan awakes to find the aftermath being recorded by students with their phones and attacks the crowd. Awaking from a coma she is horrified to discover the event has been shared online by millions of viewers. Beth must use the clips to find out what happened to the driver of the other car but somebody is murdering the owners of the clips. Can Beth track them down before the digital fragments of the event disappear forever?

Just like the riveting way the plot untangles in Richard Parker’s STALK ME, I had to rely on electronic means for this interview. I would have preferred to visit Richard in person in the Salisbury area of the United Kingdom, but alas, it had to be by email. Curses, foiled again!

Please give us a brief bio of yourself and how you ended up writing novels.

My professional writing career began in my late teens when I started submitting comedy scripts to TV. I had a few pieces used and then was offered commissions. I eventually became head writer, script associate, script editor, and then producer. Having ticked all those boxes I needed a new challenge and started writing novels around 1998.

As with your previous two novels, STOP ME and SCARE ME, this one is titled STALK ME. Is there any significance to the similar titles?

I was pleased that my first publisher stuck with my STOP ME title. When I’d finished my second book I had a different title for it but Exhibit A were keen to carry on the ‘Me’ theme. STALK ME seemed like a gift. It fits in with my S&M brand (!)

STALK ME definitely pulls the trigger on social networking. As with your previous novels, underlying themes of the Internet in all its glory or disgust certainly play a role in contemporary fiction. Do you see this as a bust or boon to our culture and social well-being?

I think every new technology is a double-edged sword and that the Internet has simultaneously made the world a more social and antisocial place. A lot of Internet users have a wider, global circle of friends now. But whereas before they would interact with the people they knew in an immediate way they now forge more friendships in physical isolation.

To follow up on the previous question, with the advent of technology, Internet and video games, there is a new kind of vicious crime to deal with as a writer. How do you approach such an evolution?

I think the Internet offers up a whole new canvas for a thriller writer. I’m personally fascinated by the idea of remote individuals using their computer to impact the lives of people thousands of miles away. All of my books feature an outwardly innocuous device—chain email, website, iPhone—which is used for a malevolent purpose.

The plot in STALK ME is fairly intricate. Did you find it difficult keeping on top of the many characters and locales?

The story is designed to illustrate what happens when a private moment becomes online currency and I wanted to capture the reaction that generates by bringing in as many perspectives as possible. As well as following the journey of a victim I wanted to examine the mentality and motives of people who upload material to the Internet.

Because of the way the story develops, however, I wanted the perspectives to be whittled down by the end of the book so the reader is rooting for a core group of characters.

Your protagonist, Beth Lucas, has a lot on her plate from the beginning. How did you develop her character and what really motivates her to put her life in constant danger?

I was keen on developing Beth as a woman who might be unstable. She knows she’s not the same person she was before the car crash and, without featuring any spoilers, because of the discovery she makes following it I liked the idea of her wanting answers to her old life but not necessarily being sure she wants to live her new one.

There are several locales in STALK ME, from France to the UK, from Los Angeles to Las Vegas to Montana. Being from the UK, it would appear you have visited these places as you have a very good grasp of them. Care to elaborate?

I’ve visited every location in STALK ME bar one. Perhaps I shouldn’t say which one! As an international thriller writer yourself you’ll know that nothing beats walking around a location for a story. It enables you to absorb those minute details that you can employ to give the story that ring of authenticity. If you can’t then you have to rely on research and your ability to invent them from what you have at your disposal.

What do you have coming next?

I am currently working on a couple of projects that include SCARE ME part two. Relativity Media have expressed an interest in a sequel so I’m taking my time and trying to make sure there are enough original surprises for readers of the first book. 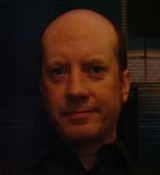 Richard Parker’s debut novel STOP ME was nominated for a CWA Dagger Award. His second novel, SCARE ME, was snapped up by Hollywood studio, Relativity Media by DALLAS BUYERS CLUB producer Robbie Brenner. Star of PRISON BREAK and screenwriter of STOKER, Wentworth Miller, has just completed the screenplay.

Lee Lindauer
After a thirty-plus year career as a consulting engineer, Lee Lindauer turned to his next love of writing. He is the author of The Persian Quandary, coming fall, 2013. His following novel, The Möbius Sequence continues the drama of Mallory Lowe, a mathematics professor who uses her logic and calculating skills in combating despots and evildoers. He lives in Western Colorado with his wife.