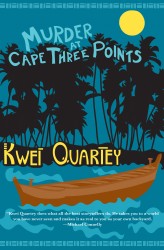 Kwei Quartey’s first book, WIFE OF THE GODS, introduced a memorable new detective—Darko Dawson in Accra, Ghana.  Michael Connelly said of his writing: “Kwei Quartey does what all the best storytellers do. He takes you to a world you have never seen and makes it as real to you as your own backyard.”  WIFE OF THE GODS went on to be an LA Times bestseller.  In the next novel, Darko faced a serial killer of homeless kids in CHILDREN OF THE STREET, and everyone has been waiting impatiently for the third book in the series.  The new Dawson novel—MURDER AT CAPE THREE POINTS—was released last month and was certainly worth the wait.

Kwei is a medical doctor and lives in Los Angeles, but spends plenty of time in Ghana researching his books.  He divides his day by writing in the morning before he starts his medical work.  I asked him about his new book and where he sees the series going.

In MURDER AT CAPE THREE POINTS, the backstory—indeed it’s up front and center—is the exploitation of Ghana’s offshore oil resources.  Was this the hook that drew you to Sekondi-Takoradi and the new book?

As usual, I can’t remember exactly what made me want to write MURDER AT CAPE THREE POINTS (MAC3P) in that setting. I just saw greed and lust and murder written all over oil discovery. Or it might have been a friend in Takoradi who told me how much a bunch of oil execs in town hated him because he went on the radio and accused some folks of corruption. Then I met a journalist who fed me some more scandalous information, which of course was all perfectly juicy for me. You know us mystery writers: the more nefarious things can be, the better.

Darko Dawson now has two children, having adopted Sly, and beloved Hosiah has just had the heart operation he needed.  This is the point at which Darko is forced to leave Accra and the family to investigate a gruesome murder.  The trip is not without personal challenges.  Was this tension between his private and professional life part of the plan for the novel?

Yes, I like that conflict and tension. It might come from my childhood as I observed my dad, who, my mother once declared in exasperation, seemed “more married to his work than to me.” Darko, on the other hand, tries hard to strike the balance between work and family with family having the upper hand. Sometimes you make characters in your book just like family members, other times exactly the opposite.

The victims are shot, and then one is beheaded and the head impaled on a pole on a canoe drifting towards the oil rig.  There are immediate connotations of juju.  Witchcraft often sits in the background of killings in Africa, and belief in it is widespread.  How do you find western readers react to this?

That’s an amazing question, Michael. No one’s ever asked me that. I know it’s your life in Botswana and RSA that gives you this insight. Quite honestly, I’m not sure what western readers really think, and there’s probably a wide range of reactions. I like to believe that most people who read the kind of mysteries you and I write find African beliefs at least interesting in the context of the story, even if not credible in the real world. But the way they react has to be secondary to what I feel must be an essential ingredient to the story. Can’t make raisin bread without the raisins.

Darko has anything but an easy ride.  The local police are unhelpful at best, corrupt at worse.  Suspects abound although none seems to have both a strong motive and opportunity.  As he investigates, we get a fascinating tour of an oil-boom town Africa-style and a wild and apparently still unspoiled part of the country.  How did you go about weaving all these substories into the plot?

The stories kept piling on until my own head was spinning. I always like to have the whole range of human vices involved in the story: jealousy, lust, greed, and so on, and then I like to have different triggers for and manifestations of those vices. And vengeance, not just for oneself, for someone else, fascinates me. I’m interested in adultery too. Sometimes one or both of the parties can’t seem to help themselves, but at other times they seem to carry out their deed with great deliberation, and I wonder why that’s so. Family, too. Most family conflicts are messy, and in Ghana they can be very messy and bitter—perfect for murder mysteries. In this story, I brought in an element of my own ancestral family and used a real letter (I still have the original) that my paternal grandmother, Bessie, wrote to her lover as she prepared to leave her husband. There was a lot going on there, and my brothers and I have still not figured out the whole story, but it’s an example of the family turmoil that can take place generations ago. I have one of my brothers, who is the genealogist of the family, to thank for unearthing the information.

Regarding the oil-boom town, someone who has just read my novel and knows Ghana well commented that Takoradi is in many ways perfect for showing the transition of a rather “sleepy,” country town to a booming metropolis. For example, there is now a huge five-star hotel that has just opened that promises to eclipse even the finest of hotels already there, yet there is plenty of bush land not very far out from Takoradi proper.

You had some interesting experiences researching MURDER AT CAPE THREE POINTS in Ghana.  Would you tell us about a few of those?

Top of the list was my helicopter ride to and from an oil rig called West Leo, identical to the kind described in MAC-3P, and my tour of the rig given by the personnel. There aren’t many people that get on an oilrig, and I thank a Tullow Oil drilling engineer for arranging that. I can say that it was a once-in-a-lifetime experience that thrilled me to bits. Less pleasant was the mandatory preparation and training I went through in order to board the helicopter. Oil companies are very strict about this. I had a three-day safety training course that included the infamous Helicopter Underwater Escape Training (HUET), which involves being strapped into a seat in a mock helicopter cabin, dunked in a swimming pool, and turned upside down, at which point you have to knock out the window and escape. Let’s just say that it wasn’t exactly fun.

Ah!  That’s why the scene where Darko has to do it is so convincing!

Yes, I felt that if I was going to put Darko through all that, the least I could do was experience it myself. That’s my general principle: I try to sample every adventure that I describe in the novels.

You signed a two-book deal with Soho, so we can look forward to another Darko Dawson adventure next year.  Would you give us a hint as to what’s ahead for Darko and his family?

Yes, I’ve begun work on this novel, tentatively called GOLD OF THE FATHERS. Darko has been promoted to Detective Chief Inspector (“DCI”—I love how that rolls off the tongue) from Inspector, and this time he has to go up to Obuasi, one of Ghana’s main mining towns, to temporarily replace the divisional chief crime officer who has unexpectedly died. He finds the office a disorganized mess and hasn’t been there two days when a report comes in of an illegal Chinese gold miner found dead, buried in several layers of gravelly gold ore. Because Darko is expected to be in Obuasi at least a year, he has moved with his wife Christine and his two boys Sly and Hosiah, who have some trouble adjusting to the new environment. Gifty, Darko’s nemesis mother-in-law, is back to cause trouble with him in this one!

Find more about Kwei Quartey and his Ghanaian mystery series on his website.