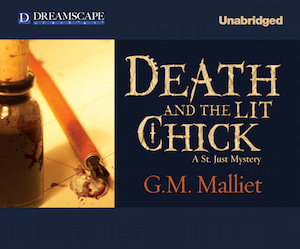 Wildly successful chick lit mystery writer Kimberlee Kalder is the guest of honor at an exclusive writers’ conference at Dalmorton Castle in Scotland. But the fun ends when Kimberlee is found dead at the bottom of the castle’s bottle dungeon. Who didn’t want to see prima donna Kimberlee brutally extinguished like one of her ill-fated characters? It’s up to Detective Chief Inspector St. Just to track down the true killer in a castle full of cagey mystery connoisseurs who live and breathe malicious murder and artful alibis…

“This enjoyable cozy is set in Scotland, making Davina Porter the perfect choice to portray the British characters.” – AudioFile Magazine

“An absolutely delicious skewering of the world of mystery publishing and its none-too-savory denizens, Death and the Lit Chick is even wittier and more skillfully constructed than her Agatha Award-winning Death of a Cozy Writer.” – Denver Post

DEATH AND THE LIT CHICK is available from the author’s website.

The Dark Pool by J.E. Fishman

Shadow of the Wolf by Connie Flynn