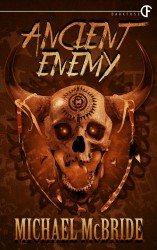 In Michael McBrides’s new novel, ANCIENT ENEMY, Sani Natonaba’s ancestors have lived in these canyons for more than seven hundred years, but they aren’t the only ones. When he awakens to the bleating of his family’s sheep being slaughtered, he learns that something is stalking this isolated corner of the reservation, a predator unlike any he has encountered before, one that attacks with alarming stealth and ferocity.

Only his grandfather knows what lurks outside in the darkness, but a stroke has left him unable to communicate, forcing Sani to embark upon a journey into the distant past to discover the horrible truth. And he’s running out of time. There’s no sign of an end to the killing and already he’s found claw marks and strange footprints around his home.

Sani must decipher the clues hidden a millennium ago by the Anasazi before their mysterious disappearance if he’s to have any hope of surviving the impending confrontation with an ancient enemy that has already hunted his bloodline to the brink of extinction.

What was the inspiration behind ANCIENT ENEMY?

ANCIENT ENEMY was born of a fascination with inexplicable historical mysteries, in this case, the disappearance of the Anasazi from the Four Corners region of Colorado. I previously touched upon it in my 2012 novel, VECTOR BORNE, and felt as though it deserved further exploration. As the story developed, however, it became less about the Anasazi than the modern-day characters inhabiting the land they abandoned. I found myself becoming increasingly invested in the characters in a way I hadn’t anticipated. Rest assured, though, there’s still plenty of action and adventure. The plot revolves around the discovery of clues left in the ruins of a once-great society and deciphering them before it’s too late.

At its heart, ANCIENT ENEMY is a coming-of-age story about a boy trying to find his place in a world where he doesn’t belong, and his relationship with his alcoholic mother and his dying grandfather. It was while writing this novel that my own grandfather died, making this book, on many levels, my most personal work as it allowed me to express my feelings in pretty much the only way I know how.

Like all of my novels, the research was both fun and exhaustive. There’s a ton of information about the Anasazi, although the majority of it is largely speculative considering they abruptly abandoned their civilization at the height of its prowess nearly a millennium ago. Even academics can only guess at the function of different structures and the rationale behind the sudden need to build their dwellings high up in the cliffs of some of the most remote canyons on the planet, but I also had to write it in such a way as to not project myself as anything resembling an expert. The story is told from the perspective of a seventeen-year-old struggling with making a life in the twenty-first century on a reservation beholden to the past and rationalizing the world he sees on TV with the abject poverty he experiences on a daily basis. When it comes right down to it, there’s far more information out there regarding an historical people than the extant tribes of the American Southwest. A good mystery is sexy, but the conditions that exist on many isolated reservations today are far more depressing.

How does ANCIENT ENEMY relate to your other works?

ANCIENT ENEMY is a standalone work set in the real world, for all its beauty and ugliness. For readers looking for a comparison to my larger body of work, I like to think of it as a cross between THE COYOTE and SNOWBLIND, if you can imagine that. For those unfamiliar with my work, imagine Michael Marshall meets Preston & Child, at least thematically. Those guys have gifts that make the rest of us look like we write our manuscripts in crayon.

Can you tell us about the Sani Natonaba?

Sani Natonaba is seventeen and lives on the Ute Mountain Ute Reservation in Southwestern Colorado, near Mesa Verde National Monument. Half Navajo, he’s accepted by neither tribe, both of whom still cling to age-old prejudices spawned by a bloody war of attrition that left them at the mercy of the federal government, which consigned them to reservations of ever-diminishing size. He’s bright and further estranged from the other kids his age by an online outreach program offering the kind of education to which his classmates don’t have access. His father left when he was small, at which time his mother turned to the bottle, essentially orphaning him were it not for his maternal grandfather, who took them both in and raised Sani as his own. As Sani soon learns, however, his grandfather has secrets that affect both his past and his future. His is a journey of self-discovery as much as it is a battle for survival against an ancient enemy he’s unprepared to face.

Are you scheduling any appearances to promote this title?

I’ll be attending a live video chat on Thursday, May 15 at 9 EST to discuss ANCIENT ENEMY and anything else readers would like to know. From what I understand, the chat is an exclusive for members of the DarkFuse Book Club, so for anyone interested in attending, sign up now at www.darkfuse.com/book_club/ and you’ll not only be able to join us for the fun, but get a whole lot of killer fiction for far less than cover price. I can also be reached through my website where I’m happy to talk to readers about everything from books to sports.

I just signed off on the galley for SUNBLIND, a new novel coming in September from DarkFuse. It’s about a group of undocumented aliens braving the Arizona desert and their trials at the mercy of the brutal elements and a predatory species that’s managed to survive in one of the least hospitable environments on the planet. As for my current work-in-progress, I’m neck-deep into a novel called FEARFUL SYMMETRY, which is about the parallels between a modern exploration into a remote region of Tibet and an earlier Nazi quest to find the origin of the Aryan race. They discover a secret the world is unprepared to learn and one they might not survive long enough to reveal. I hope readers find both action-packed and a little frightening. More than a little, actually.

Has the advent of eBooks have any impact on your career?

First and foremost, the shift toward a digital landscape has allowed me the opportunity to write for a living, which has been my goal since I first committed myself to the craft. Prior to the eBook explosion, my core audience consisted of a rabid group of readers dedicated to supporting small and independent presses. Their devotion and encouragement have been instrumental in my development as an author. And I won’t rest until I’ve succeeded.

Michael McBride is the bestselling author of Bloodletting, Burial Ground, Innocents Lost, Predatory Instinct, The Coyote, and Vector Borne. His novella Snowblind won the 2012 DarkFuse Readers Choice Award and received honorable mention in The Best Horror of the Year. He lives in Avalanche Country with his wife and kids.

To learn more about Michael McBride, please visit his website.