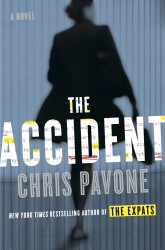 Chris Pavone, NEW YORK TIMES bestselling author, is a man of intrigue. I suppose you could call him a renaissance man, although, man of intrigue does roll off the tongue nicely. He’s a New Yorker at heart, who attended Cornell and later worked for various publishing houses, at one, he even specialized in cookbooks. Before his journey into fiction, he wrote a small wine journal called THE WINE LOG. Chris then spent time with his wife and two kids in Luxemburg as an expat and used the time well, writing his blockbuster debut novel, THE EXPATS. In March, he releases his exciting follow-up, THE ACCIDENT.  It’s a tale about a literary agent drawn into a complex web of betrayals over a mysterious manuscript detailing dangerous information that proves to be deadly.

Tell us about THE ACCIDENT.  We’re all curious (and excited!) to know what to expect as a follow-up to THE EXPATS.

A literary agent named Isabel Reed receives an anonymous manuscript, revealing dangerous secrets about a powerful man—and then people start dying. Isabel is drawn into a complex web of betrayals among media figures in New York, Washington, and Los Angeles, plus a couple of spies in Copenhagen (characters who appeared in THE EXPATS!) as well as the author in Zurich, with interrelated back stories in Paris, London, and a winding country road in upstate New York, long ago and late at night, which is the scene of the eponymous accident.

What made you pick up a pen and start writing?

I’ve always wanted to, and at age forty I had an unusual experience that (a) I thought would make the basis for a decent book, and (b) gave me the time to write. So, it was time to give it a try.

Do you like to incorporate life experiences into your writing?

Yes. THE EXPATS drew heavily from my life in Luxembourg as an expat, a suddenly career-less trailing spouse, taking care of small children, surrounded by leisure and boredom and limitless opportunities for reinvention.  THE ACCIDENT is based on my two decades working in the book-publishing business, amid editors and literary agents who are always scrambling to find the new bestsellers, sacrificing bits and pieces of their idealism and perhaps ethics along the way. But although both novels begin with settings in real-world milieus, and both are fundamentally about ordinary real-world issues—THE EXPATS is about marriage, THE ACCIDENT about ambition—they both take sharp turns into extraordinary circumstances.

When creating a character (big or small), what steps do you take to make them feel real?

I’ve written a large quantity of material that doesn’t appear in print, and was never meant to: character sketches. I write about where the characters grew up, what they drink, who they love, what they want. Writing this material is sometimes how I start my workday, and often how I conquer the blank page. It’s also partly how I figure out what the characters should do, and hence what should happen in the book.

Do you find that your experience as a book editor helps you when it comes to writing and publishing?

Immensely. I have a deeply ingrained respect for editing, for the improvements that are inevitably made to a manuscript via the expertise of professionals; my work is no exception. And after I’ve finally delivered a publishable manuscript, and the writing part is over, there’s still a long period before on-sale when a lot of important stuff happens; I generally know what’s going on during these stages, when the book is being developed as a consumer product that’s going to be manufactured and launched into the marketplace by a large, complex organization. I think I know what to worry about, and what not to worry about, and I hope this enables me to be a calmer, less apoplectic, and more productively participatory author.

Thank you for reading my books, if you do. But even if not, thank you for reading any books. I’m writing for you. I believe that books are for the benefit of readers, and should be written accordingly. I think that writing just for yourself—to satisfy your own need for self-expression—is what journals and diaries are for. Publication is for the public.

What can we expect next?

I’m excited to be spending the better part of March and April visiting bookstores, libraries, and festivals in America and Europe (tour details on my website), then I’ll be returning to working on my new manuscript, which is about an accidental spy.

Chris Pavone’s first novel, THE EXPATS, was a New York Times, USA Today, Washington Post, Chicago Tribune, and international bestseller, as well as winner of Edgar and Anthony awards for best first novel. Chris grew up in Brooklyn, graduated from Cornell, and was a book editor for nearly two decades, as well as an expat in Luxembourg briefly, but now lives again in New York City with his wife and children.