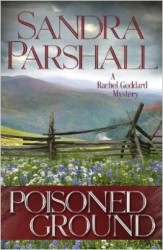 Sandra Parshall’s latest book POISONED GROUND will be hitting shelves on March 4, 2014. It is the next book in her Rachel Goddard Mystery series. Sandra has been a writer for many years, working in the newspaper business as a reporter. You could say that she was born to write mysteries and suspense, since her first job was writing the weekend obituary for her hometown newspaper. From the SPARTANBURG HERALD to the BALTIMORE EVENING SUN to interviewing Hugh Hefner on his private jet, Sandra finally was able to pursue her passion in 2006 with the release of THE HEAT OF THE MOON and won the Agatha Award for Best First Novel. She has served on the national board of directors of Sisters in Crime and is a regular contributor to our very own THE BIG THRILL. It is thus with great pleasure that we have a chance to ask her some questions for a change. But first, here’s a description of her compelling new novel, POISONED GROUND:

When a powerful development company sets its sights on Mason Country, Virginia, as the location for a sprawling resort for the rich, the locals begin taking sides. Many residents see the resort as economic salvation for the small Blue Ridge Mountains community, while others fear the county will become financially dependent on a predatory company.

Few oppose the development more vocally than veterinarian Rachel Goddard. She sides with locals reluctant to sell their land and, in the process, complicates the life of her new husband, Sheriff Tom Bridger.

When a beloved couple is gunned down on the very farm they refused to sell, it seems supporters will stop at nothing to ensure the success of the resort. Now disagreement in the community has exploded into civil war with both sides lashing out. As the violence escalates, Rachel discovers the attacks are more sinister than they appear.

Can she bring the truth to light before her community tears itself apart?

POISONED GROUND is your latest Rachel Goddard book, what can you tell us that is not on the back cover?

The fight over a development project is merely the trigger for the real story of tangled histories, relationships, and secrets in a small rural community. The prospect of sudden wealth divides neighbors and relatives—brother against sister, father against son—and dredges up a long-buried secret that casts a shadow over several families. The hidden story rises into view bit by bit as the surface story plays out.

Now that you are six books into your Goddard series, how has Rachel grown as a character / person?

In the first book, THE HEAT OF THE MOON, Rachel was baffled and terrified by her own emotions and memories. She didn’t know the truth about her family, didn’t know who she could trust, and had to screw up the courage to challenge her authoritarian mother. She fought for the right to follow her own path, and she’s developed into a confident young woman who knows what she wants out of life and doesn’t hesitate to stand up for those who are weaker.

For fans / readers just finding out about you, how should they tackle your series?

Each book stands alone, but starting with THE HEAT OF THE MOON will allow readers to see a deeper layer of meaning in the later stories than they might otherwise. Rachel is living with a devastating secret, and she has good reasons for wanting to keep it under wraps. Fragments of it come out in the later novels, but the whole story is told only in the first book.

Which character in your series, besides Rachel, did you have to most fun writing, and why?

In the series overall, I enjoy writing about Tom Bridger, Rachel’s significant other in the last five books. He’s a cop and gets to do the things Rachel can’t do, such as snapping the handcuffs on the bad guys. He’s honest and fair but tough, and I have fun being a cop vicariously through him. In POISONED GROUND, I loved writing about the Jones sisters, who are named for the seasons—Winter, Spring, Summer, Autumn. One died tragically long ago. The others live in the family home, unmarried and growing older and increasingly eccentric. They moved into my head and began writing their own story. What came out of their mouths often surprised me. I loved every minute I spent with them.

I’m taking a break from Rachel to write a psychological suspense novel that won’t let go of my imagination. I’m excited about writing outside the murder mystery structure again, as I did in my first published book.

Sandra Parshall is the Agatha Award-winning author of six Rachel Goddard mysteries. A former newspaper reporter, she is married to a longtime Washington journalist and lives in Northern Virginia.