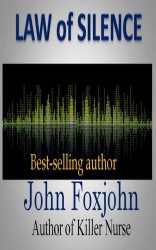 When the Houston Police Department charges Alicia Monroe with the murder of her husband, defense attorney Danny Kinsley quickly discovers he is facing more dangers than the courtroom. The real killers have Alicia in their sights and Danny is all that stands between his former lover and a horrific death.

Bestselling author John Foxjohn has just released his newest thriller, LAW OF SILENCE. Foxjohn has received many accolades over the years, including an “Author of the Year” award in 2008. Born and raised in East Texas, his experiences as a former Army Ranger and homicide detective (with over 300 cases under his belt) feature prominently in his novels.

We had the opportunity to interview Foxjohn about his newest novel, what motivates him, and how his extensive life experiences have influenced his writing.

Most of your books are set in Texas. What is it that fascinates you most about the region?

I am a born and bred Texan, but other than that, it makes it easier to research the area I am writing about. Louis L’amour was one of my early writing heroes, and he believed in going to the place where he was writing about—to get the feel of it. I guess I am that way, too.

You were an Army Ranger. How has that experience impacted the characters in your novels?

I graduated from Ranger school and later I was an instructor there, and I can assure you there is not a tougher school in the world. People in the know would not even debate that statement. However, I have seen many big, strong, tough men quit, crying like a baby.

What type of research do you engage in prior to beginning a novel?

I like to do all of my research before I start to write. Sometimes my characters take me somewhere I’m not sure of, and then I have to go and find out where or what, but that usually don’t happen.

Second, I want to know the important facts of what will affect my character. When I first began to write my main character was always a homicide detective. This was something that I could pull from myself. I knew the problems and everything he would face, and all the aspects of the job and the people around him.

Later, I began to write about attorneys. This took my research to a new level, and one that I liked.  I had to go and watch trials to see just what went on in one. I watched, talked to, and interviewed attorneys about their jobs—the highs and lows of them, and the problems they face.

In this research I talked to men and women and you might think the answers would be the same, but they aren’t.

You’re one of the few writers who can move seamlessly between writing nonfiction and fiction. How do you find the two worlds colliding?

I’m not sure, but I might be the only author who writes nonfiction true crime and fiction. I’ve written entire blogs about the difference. In fact, I have an article coming out in SUSPENSE MAGAZINE in March on this subject.

I don’t want people to think I am patting myself on the back when I say this, but the truth is, it’s very difficult. In writing fiction, you want to get the facts right, but you don’t want them to interfere with the story. You get a mindset like that then write the story.

However, when I am writing nonfiction true crime, I want it to read like a mystery but I’d better not let fiction get involved. The courts get involved when true crime authors insert fiction into their work.

How did you know that you were meant to be an author?

You mean I was meant to be an author?  I’ve sure worked awfully hard for something I was meant to do. But to be honest, I think that applies to most authors who have some success. I’m not sure people are meant to be authors—they make themselves into it from hard work.

What advice would you offer to aspiring authors?

A. Never stop learning or trying to improve.

B. Read, read, and read. Read the genre that you are trying to master, but don’t forget the others. I’m not a fantasy reader, but I think I have learned to set scenes better by reading good fantasy writers.

C.  Listen to other writers—especially those who know something about the craft, but don’t ever let anyone write the story for you.

How do you spend a typical day as a writer?

I’m not sure there is such a thing. Some people have set times to write and do others things. Some days I write more than others. I’ve never been one to say I have to write so many words a day. I’d rather write 500 good words than a thousand and have to delete most of them.

Besides, I have found that as soon as I set those kinds of timetables, life happens, and then I get frustrated.

Tell us a little about LAW OF SILENCE. Is it part of a series? Recurring characters? Based on a true story? (We hope not!)

LAW OF SILENCE does not have recurring characters, and it could one day result in a series.

I didn’t base the book on a true story, but in some ways, it is based on a real person. Over the years people have told me that I needed to write a book about my life. I keep telling them that I am not interesting enough to write a book about. Danny, the protagonist in LAW OF SILENCE is big, good looking, has a lot of money, and is an attorney. Obviously that isn’t me. But his story before he got to that point is mine.

The formative years in Danny’s life is my story, and at times, it wasn’t easy to write.

This novel is considered a romantic suspense. What other categories would you assign in a perfect world?

It could easily be labeled a mystery/suspense/thriller. It is a romantic suspense because a major part of it does involve a romantic element, but a lot of mysteries are that way.

The Pineywoods of East Texas have produced many things, including award winning and best-selling author John Foxjohn. A country boy at heart, Foxjohn often says, “I was born and raised so far back in the woods that they had to pump sunshine to us.” With little to do but hunt and fish, Foxjohn’s environment created an atmosphere that fostered imagination and dreams, something that Foxjohn would excel at.

At the tender age of seventeen, he quit high school and joined the army. Foxjohn’s six years would see him graduate from jump school, Ranger school, and become the youngest sergeant in peacetime army. A tour of Viet Nam and Germany highlighted an extremely successful stint for Foxjohn. After an honorable discharge, Foxjohn followed that up with ten years in law enforcement, including a long tour as a homicide detective. Fulfilling a promise to his dying mother, Foxjohn graduated from college and began a new adventure of teaching and coaching football.

Now considered one of the rising stars in publishing, Foxjohn has published in six different genres, and readers worldwide clamor for his books.

To learn more about John Foxjohn, please visit his website.