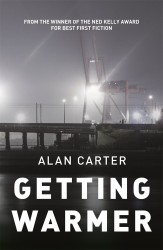 Cato Kwong is back in Boom Town and back on a real case – the unsolved mystery of a missing fifteen-year-old girl. But it’s midsummer in the city of millionaires and it’s not just the heat that stinks.

A pig corpse, peppered with nails, is uncovered in a shallow grave and a body, with its throat cut, turns up in the local nightclub. As a series of blunders by Cato’s colleague brings the squad under intense scrutiny, Cato’s own sympathy for a suspect threatens to derail his case and his career.

“GETTING WARMER is replete with such gems. It’s a winner.” ~THE SATURDAY AGE, SYDNEY MORNING HERALD, CANBERRA TIMES

“… compelling crime drama …” ~OUT IN PERTH

“Descriptive, … witty, well researched and confident, this tale of crime in Australia’s ‘boom town’ is a rollicking good read for those who enjoy a thrilling story.”  ~MINESTYLE MAGAZINE

“GETTING WARMER is a great read …” ~THE WEST AUSTRALIAN 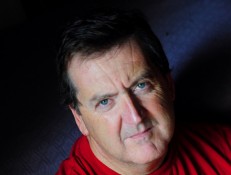 Alan Carter has been shortlisted for the prestigious UK CWA Debut Dagger Award and won the 2011 Ned Kelly Award for Best First Fiction. He is a television documentary director and currently works for Who Do You Think You Are? on SBS1. Carter wrote his first book, PRIME CUT, while living as a ‘kept man’ in Hopetoun, on the south coast of WA. His new book is GETTING WARMER.