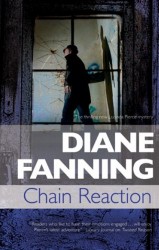 CHAIN REACTION is the explosive new novel from Diane Fanning—literally. It opens with a bomb.

The explosion kicks off the seventh book in Fanning’s crime series featuring Lt. Lucinda Pierce—a tough small-town cop with a troubled past and an admirable inner strength.

“I often model my characters after someone I wish I could be,” Fanning says, crediting a dear friend as the inspiration for Pierce. “Susan Murphy Milano was one of the pioneers in the fight against domestic violence. When she was in her early twenties, her father came home and shot his wife and then shot himself. I borrowed Susan’s strength and ability to cope for Lucinda.”

Pierce has a similar violent backstory, compounded by a number of fictional on-the-case traumas. While on the scene of a domestic violence case, Pierce dives to knock the potential gunshot victim out of harm’s way. The woman survives, but the bullet scrapes across Pierce’s face.

The resulting facial disfigurement—including a missing eye—really ramped up the character’s personal conflict.

“Not only did Lucinda have to deal with the comments and stares, but there was a political component to it as well,” says Fanning. “She had to adapt to shooting with one eye, and some people in law enforcement thought she should be behind a desk rather than out in the field.”

Luckily for readers, Fanning won’t allow Pierce to sit on the sidelines. In the past six books, Pierce has tackled complex, dangerous, and sometimes controversial issues. In CHAIN REACTION, Fanning explores the stereotypes—and often misunderstood fears—surrounding the Sikh religion.

“Rather than make this a character issue, I wanted to make it a mental issue,” she says. “Hopefully it will make people think about what they assume. I learned a lot through my research.”

Research comes somewhat second nature to Fanning, who also writes True Crime novels. While her non-fiction and fictional worlds fully immerse her in the crime genre, Fanning admits to leaning on the Pierce series to balance her emotional scales.

“With true crime, you can’t control someone dying or people’s emotions,” she says. “With fiction, I try to counteract that. I don’t have to talk to real victims or see autopsies. I can kill anyone I want. It gives me an escape, a sense of control I don’t have. Part of the magic of writing is that it exorcises so many demons.”

While writing true crime can be more difficult, Fanning enjoys balancing both worlds. CHAIN REACTION is her 21st published book, with two more slated for release this year—doubly impressive given that her first book was released in 2003.

Instead, she abides by two personal rules—she never stops writing at the end of a chapter, and she’s taught herself to write virtually anywhere.

“If I’m in my studio and it’s not working, I go to a coffee shop,” she says. “You need to practice writing any way so you can write however and wherever you want.” Even if it’s on the back of a used envelope. In fact, Fanning prefers to write long hand on a legal pad.

“My creativity flows better when nothing feels permanent,” she says.

Solid advice for keeping the dreaded writer’s block at bay.

“A lot of people say they want to write, but they never start,” she says. “The only thing that gets you published, except for luck, is persistence. Don’t follow the trends, follow your passion.”

When Fanning isn’t researching, writing or keeping up with extensive social media network, her head is buried in a book, preferably one written by her favorite author, James Lee Burke.

CHAIN REACTION is available March 1. To learn more about the author, the Lucinda Pierce novels, Fanning’s True Crime novels and other intriguing projects, visit her website. 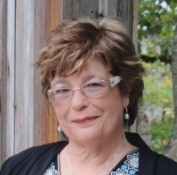 Diane Fanning is the Edgar-nominated author of twelve true crime books as well as the seven books in the Lt. Lucinda Pierce crime fiction series. She has been interviewed on the Today Show, 48 Hours, 20/20, Forensic Files, the Biography Channel, E! and the BBC as well as numerous cable network news and crime shows and radio stations across the States and Canada. Raised in Baltimore, she spent twenty-one years in Texas and now lives in Bedford, Virginia.