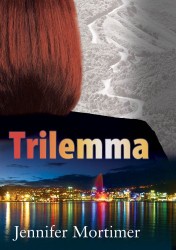 Asian-American Lin Mere follows her father’s trail to New Zealand to try to establish a relationship with her father’s estranged family, and maybe rekindle a romance, but she gets distracted by the offer of a job as chief executive. When danger enters Lin’s life from an unexpected source, she has to face an ordeal even more challenging than the battles in the boardroom.Confronting a trilemma—a choice between three bad options—Lin must make her move.

“An utterly engaging tale, with a pitch-perfect plot, jam packed with surprises. This book will bring Jennifer Mortimer front and center onto the thriller stage.”—Steve Berry, NEW YORK TIMES best-selling author of THE KING’S DECEPTION.

“It starts off as a conventional piece of modern literature about the corporate world. It interweaves elements of romance and the uncertainties of family relationships. And, in retrospect, it’s a thriller. Notice the key word, ‘retrospect’. Such is the strength or weakness of first-person narration. Since our protagonist is oblivious to the danger, so are the readers. The result is a clever piece of writing.”—David Marshall, THINKING ABOUT BOOKS.

Is the book any good?

Who asks that? Yes of course it’s good!

Where is it set?

In Wellington, the capital city of New Zealand, and also in rural Hawkes Bay, an idyllic part of the countryside, amongst vineyards. Wellington is a beautiful boutique city, very vibrant, with a stunning setting, an undiscovered gem.

What is uniquely New Zealand about your novel?

Well it shows some pretty bits of a pretty country, but also some less attractive sides to the culture. I portray city life in New Zealand, which is also less common. And I think because my heroine is a chief executive—that’s unusual in a novel, although not so unusual in New Zealand itself, which has a strong tradition of women in power.

What themes are in TRILEMMA?

There is of course the main theme, of making difficult decisions. A ‘trilemma’ is (1) a choice among three favorable options, only two of which are possible at the same time and (2) a difficult choice from three options, each of which is unacceptable or unfavorable.

In the story Lin has to constantly choose between love, family, and her career, and at the climax she has three bad choices and has to choose one of them. So that’s a key theme. The love/family/career choice is one that many women have to make. Another theme is how “tall poppies” are treated; i.e. if you excel, you should be cut down to size.

What do you want readers to take away after reading TRILEMMA?

I want them to have a great feeling of satisfaction from the story. I want them to have felt what Lin feels. And also maybe to find some of her life and times as a chief executive fascinating. Maybe not inspiring! But interesting.

How is TRILEMMA different from other thrillers in the genre?

Well, it does have a powerful woman as its heroine. Not a ‘feisty’ one, I hate that adjective, but a real one. And that she is a chief executive in an authentic corporate environment—that’s unusual. I think it is also unusual because there are hints of danger all the way through, but Lin is completely unaware, and therefore there is also a lot of surprise when bad things actually happen. My antagonist is also unexpected. Nobody has guessed who it is yet—I probably shouldn’t say that in case it makes it easier to work it out!

Do you feel that characters like Lin are under-represented in the genre?

Yes very much so. Women in thrillers are often detectives, sometimes doctors or lawyers, but seldom businesswomen. It’s as if you must be a bad person if you’re a successful businesswoman. That is just so wrong! Also women are almost always portrayed as victims. Lin would be pissed if you called her a victim even when the bad stuff happens.

Tell me about yourself.

It’s boring talking about me! I suppose I have had a really quite exciting career as an executive, but you reach a stage when you want to create something that is all your own, rather than write a business case, or make decisions that affect large groups of people. Maybe it’s a different side of your brain. I am good at what I do in the corporate world, but I love what I do in private, on the sofa in the corner of the living room, gazing out at the harbor.

Seeing that TRILEMMA is your first published novel, where do you want to go next?

I have a sequel I am working on at the moment, set on Waiheke Island. It will be called something like DAMNED LIES. But I am also keen to work on screenplays, and have one on the—arggh—I guess you have to call it the writing board, not the drawing board.

Because every story has to have a theme, and I found the concept of those little lies we tell that we think aren’t even lies is interesting. And then I thought about the big Damned lies. And because I come from a business background I also thought of Statistics, as one does.

In the movie, who would you ask to play the role of Lin?

Maybe Lucy Liu, or Sandrine Holt from HOUSE OF CARDS! 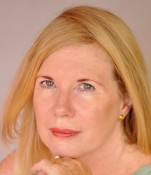 After a mixed education in literature, science and commerce, Jennifer Mortimer has worked as an IT executive in many countries and industries. She is currently the R&D project manager at Weta Digital, the people behind the special effects for AVATAR, LORD OF THE RINGS, and THE HOBBIT. Jennifer and her husband Paul split their time between a colonial villa in Wellington, New Zealand, and a Cathar castle in the south of France. TRILEMMA is her debut novel.