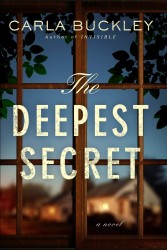 It was great fun to get back in touch with Carla Buckley for this interview. We lived in the same city before she moved, so it’s fun to catch up with her at ThrillerFest and other conferences. As a board member and Vice-President of awards for ITW, she’s one busy lady, but she made time to answer these questions about her new thriller, THE DEEPEST SECRET. Get ready for another Buckley all-night read!

Tell us about your new February release.

Diagnosed with XP, a rare medical condition which makes him lethally sensitive to light, Tyler is a fourteen-year-old who desperately wants just one thing: to be normal. His mother Eve also wants just one thing: to protect her son. As Tyler begins roaming their cul-de-sac at night, cloaked in the safety of the darkness, he peers into the lives of the other families on the street—looking in on the things they most want hidden. Then, the young daughter of a neighbor suddenly vanishes, and Tyler may be the only one who can make sense of her disappearance…but what will happen when everyone’s secrets are exposed to the light? As Eve is forced to shield her family from harm, there are some crises she cannot control—and some secrets that not even love can conceal.

Your starred review for THE DEEPEST SECRET in PUBLISHERS WEEKLY stressed what I have always noted is one of your great strengths as a writer: your flawed yet sympathetic suburban family characters. Do you create your characters from your own past at all, from observation or totally your imagination?

Thank you, Karen. It’s the flaws in my characters that make me want to write about them. I love creating worlds of shifting grays, where everything is held in question, where nothing is taken for granted, and where the best decision is not always the right decision. My characters stumble; they make mistakes and do terrible things. But they’re not evil. They’re just human.

So to answer your question, yes. I do to some degree draw from observation. I am keenly interested in what makes people do the things they do. I love hearing their stories to understand what matters to them. I’m fascinated by the different ways people talk, which is especially relevant when I’m writing from the perspective of a man or a teenaged boy. But when it comes to specific characterization, I make it all up.

One other theme I see in your earlier two novels, and, it sounds like, in this one, is some sort of catastrophe which strikes “common” people. It seems too often be some sort of unusual/devastating disease, as in your debut novel, the Pandemic Flu. And I note in your bio on your excellent website that your husband is an environmental scientist. How does this all work together to give you your dynamic plots—”the hook for the books”?

It’s true! I do love to talk about scientific threats. They’re absolutely terrifying. You can’t reason with them. They’re relentless. They cross all social, economic, gender, and racial lines. None of us is safe. My stories are all about ordinary people facing these extraordinary threats.

I’m a former English and Art major, and I avoided all science classes in college. When it comes to trying to understand basic concepts and real world application, my husband is my go-to resource. He’s endlessly patient and he knows who’s doing what in the science world. He’s put me in touch with all sorts of specialists, from the biologists on the front lines dealing with avian influenza to the preparedness officials planning for catastrophes.

But in terms of giving me ideas, let’s just say I’ve decided to follow my own drummer. My husband’s convinced there’s a killer thriller out there about the…wait for it…energy crisis. If there is, I’m pretty sure I’m not the one who’s going to be writing about it.

You have a fascinating and varied writing background: assistant press secretary to a US senator; analyst for the Smithsonian; and tech writer for a defense contractor. So how did you get to fiction/thriller writer from that?

Ah, those were the things I did to pay the mortgage. I’ve always wanted to be a novelist. As a six-year-old, I would bribe my friends to play the games I wanted to play by promising them that I would name characters in my novels after them. This was a surprisingly successful gambit. Getting published was nowhere near as easy. I wrote eight novels over twelve years before finally writing THE THINGS THAT KEEP US HERE. I’m endlessly grateful to be here, doing what I always dreamed of doing.

You have mentioned that your handling of writing techniques has evolved from free form (seat of your pants) to a more controlled, even outlined plot planning. Can you explain this evolution?

After those first eight novels didn’t go anywhere, I reexamined what I was doing wrong and decided that maybe the free form format wasn’t working for me. I turned to a screenwriter friend who taught me the basics of the three act structure. I’m now a firm believer in plotting things before I write a single word though I also like to leave some room for the characters to come alive and surprise me. It’s a tricky balance that I’m still learning.

For THE DEEPEST SECRET, I ventured from the three act structure to what I think is a more flexible four act structure. I’m a huge fan of Larry Brooks’ STORY ENGINEERING.

My next novel, THE GOOD GOODBYE, is the story of a friendship between two young women after they arrive at a burn unit following a devastating college fire, and that of their families and the mystery which ultimately brought them to that moment. 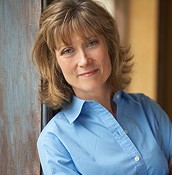 Carla Buckley is the author of THE DEEPEST SECRET, INVISIBLE, and THE THINGS THAT KEEP US HERE, which was nominated for a Thriller Award as a best first novel and the Ohioana Book Award for fiction. She is a graduate of Oberlin College and the Wharton School of Business, and lives in Chapel Hill, North Carolina, with her husband and three children. She is currently at work on her next novel, THE GOOD GOODBYE, which Bantam will publish, and serves on the ITW Board of Directors, Vice President, Awards.