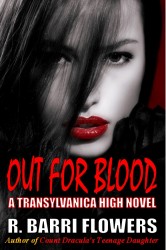 Sixteen-year-old honor student Kula Lockhart is in her second year at Transylvanica High School in Harbor Heights, Michigan. It is one of several integrated pilot schools across the country where human and vampire students peacefully coexist.

Kula recently learned that she is the half human, half vampire daughter of Count Dracula. This has made her a target for those who hate her powerful Dad and vamps in general.

As she comes to terms with her heritage and newfound abilities, things begin to heat up between Kula and her mortal boyfriend, Eriq Pratt. She also has her vamp guardians Ivan and Amelia, as well as several human and vampire friends, to balance her evolving life and times.

When Kula suddenly finds herself being pursued by a new handsome half vamp at school, Sebastian LeBlanc, she is strangely drawn to him, even if her heart belongs to Eriq. Yet Kula can’t help but wonder if it is more than coincidence that Sebastian just happened to arrive in town at around the same time that a vampire or vampires began killing humans. Could Sebastian be behind these vicious attacks?

Another new vampire, Gabryela Roswell, befriends Kula, but has a hidden agenda.

In the meantime, Kula has competition from an attractive human girl, Yvonne Elwood, who has her eye on Eriq. She also has to deal with the gorgeous and mean-spirited cheerleader vamp, Jacquelyn Brossard, a member of the rival Doerzic clan.

As Kula grapples with these issues and the changes in her life, she tries to learn more about her mother, who died in childbirth, from the only person who can give her answers–her dad, Count Dracula.

Fans of popular teen vampire and paranormal fiction series such as Twilight, True Blood, Vampire Diaries, and Vampire Academy will love OUT FOR BLOOD in this captivating series.

Now in print, eBook, and audio. Buy it today!

OUT FOR BLOOD is available from Audible and Audible UK.

“BEFORE HE KILLS AGAIN is a rocket of a read. Not only a heart-thumping thriller, this is that rare novel that is downright scary. Pick it up at your peril, because you won’t put it down until you’ve read the last word.” – John Lutz, Edgar winner and bestselling author of Twist

“A masterful thriller set in the dark underbelly of Maui, with lots of fine action, down and dirty characters, and the vivid details of police procedure one would expect from an author who is also a top criminologist. A terrific read!” — Douglas Preston, co-creator of the bestselling Pendergast series of novels on MURDER IN MAUI.

“It gets no better than this! R. Barri Flowers has written another thriller guaranteed to hold onto its readers! –Huntress Reviews on DARK STREETS OF WHITECHAPEL

“A gripping and tightly woven tale you won’t want to put down. Author Flowers neatly contrasts the natural beauty of a tropical paradise with the ugliness of murder and its aftermath. ” — John Lutz, Edgar Winner and bestselling author of Pulse on MURDER IN MAUI

“R. Barri Flowers writes with the passion and knowledge of someone who truly knows his craft. A steamy, non-stop thrill-ride through the seamy underbelly of Hawaii.” — Allison Leotta, former federal prosecutor and author of Discretion on MURDER IN MAUI

“Flowers once again has written a page-turner legal thriller that begins with a bang and rapidly moves along to its final page.” — Midwest Book Review on STATE’S EVIDENCE

“A model of crime fiction …. Flowers may be a new voice in modern mystery writing, but he is already one of its best voices.”–Statesman Journal on JUSTICE SERVED

“An excellent look at the jurisprudence system…will appeal to fans of John Grisham and Linda Fairstein.” – Harriet Klausner on PERSUASIVE VIDENCE

The author has also written a number of bestselling teen and young adult related nonfiction books as well, including RUNAWAY KIDS AND TEENAGE PROSTITUTION, KIDS WHO COMMIT ADULT CRIMES, and CHILDREN AND CRIMINALITY.