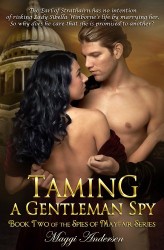 In TAMING A GENTLEMAN SPY, John Haldane, Earl of Strathairn, is on an urgent mission to find the killer of his fellow spy. After visiting the young widow of one of his agents, Strathairn strengthens his resolve. A spy should never marry, and most certainly not to Lady Sibella Winborne, with her romantic ideas of love and marriage. Unable to give Sibella up entirely, he has kept her close as a friend. Then, weak fool that he is, he kissed her. Lady Sibella Winborne has refused several offers of marriage since she first set eyes on the handsome Earl of Strathairn. Sibella’s many siblings always rush to her aid to discourage an ardent suitor, but not this time. Her elder brother, Chaloner, Marquess of Brandreth, has approved Lord Coombe’s suit.

Maggie Andersen, author of TAMING OF A GENTLEMAN SPY, took some time to answer a few questions for us.

How does TAMING A GENTLEMAN SPY relate to A BARON IN HER BED?How long is the gap between the two books in the series?

In the first of the Mayfair spy series, A BARON IN HER BED, Baron, Guy Fortesque, is rescued and befriended by John Haldane, Earl of Strathairn from TAMING A GENTLEMAN SPY. Although Guy knows little about John and suspects there’s much he keeps to himself, they work together to rid England of a treasonous group of men. England is rife with intrigue and revolution is in the air.

Some thirty years ago, Guy’s father left England after killing a man in a duel, and settled in France. The war with Napoleon has ended, and Guy comes to England to claim his inheritance,which includes the ancient mansion, Rosecroft Hall. But a shadowy figure stands in his way.Guy’s legitimacy as the rightful heir comes under question, after he loses his papers in an attack on his life.Might Miss Horatia Cavendish’s Godfather—a relative of Guy’s who has cared for his house and lands in his father’s absence—be behind the attempts on his life? Guy and Horatia Cavendish arrange a faux engagement to flush out the villain. After a turbulent past, Guy yearns for a quiet life. He is a reluctant spy,but events draw him into the spying game when he encounters Count Forney, a Frenchman involved in a plot against the Crown. An anti-Royalist, Forney is part of a group of French and English men who refuse to accept the Congress of Vienna and are intent on freeing Napoleon from St. Helena.

In TAMING A GENTLEMAN SPY, several years have passed. England still suffers unrest, which reaches boiling point in the North.Lord Liverpool’s unpopular government has been dealing with the Luddites, men pushed out of work by the rise of machinery,while many of the starving poor, angered by the Corn Laws, which have raised the price of bread, are seeking a voice.

Strathairn, a military spy, is fighting in the dark. He has lost a comrade and witnessed the deaths of too many good men during the war. After all this time, does British intelligence have it wrong? Does Count Forney still live? Or has a new foe emerged? Guy, Baron Fortescue now a country gentleman, married to Horatia, has a son he must protect, and is reluctantly drawn into the fray.

What can you tell us about the main character, Lord of Strathairn, and how has he evolved from the previous novel?

In A BARON IN HER BED, John, Earl of Strathairn, is a man intent on remaining single. He treats women lightly. While patently aware that he has disappointed his father,an erudite politician, John’s intelligence work has become his life. Guy feels Strathairn’s friendship with Lady Selena Winborne will come to naught, believing John will never marry. John finds his job fills the emptiness he has carried since the war, and gives his life purpose. He prefers gambling clubs and taverns to balls and soirees. Suffering nightmares since the war, gambling has become a solace, which helps ease the tension he lives with.

As TAMING A GENTLEMAN SPY begins, Strathairn is still denying himself a normal existence, despite his sisters urging him to marry and provide an heir.When a close comrade is killed, leaving a wife and child, John firms in his opinion that he should never marry. He cannot give the game away, even though he’s aware that spies can be caught up in the excitement, become reckless and die like his comrade. But a pervading restlessness is overtaking him. His two sisters have left home and he’s alone. A tavern wench can quench his lust, but he finds he wants more from life. When his friendship with Lady Sibella, daughter of the Marquess of Brandreth, turns to something more, Strathairn backs away.Involved in a dangerous mission, he could be dead tomorrow. Better, she marry a man who sits by the fireside at night with her.

Can you tell us anything about the antagonist?

Strathairn and his spymaster are unsure whom they seek. Is one of Napoleon’s finest marksmen loose in England, planning to assassinate someone of authority?Or does Count Forney live? False leads and confusion surrounds John as he works to discover those behind a dastardly plot. It doesn’t help when John is distracted byLady Sibella, the woman he wishes to protect. She has been pressured by her family to marry Lord Coombe. Is John’s dislike of Coombe merely jealousy, or is the man hiding something behind his personable appearance?

What kind of research did you do for TAMING A GENTLEMAN SPY?

The Spies of Mayfair are historical romances, but I still needed to learn more about the Home Secretary, Viscount Sidmouth’s spy network, the Corn Laws, the Peterloo Massacre, George IV and the Upper Ten Thousand or ton.

PLOTS AND PARANOIA by Bernard Porter

PRIVATE AND SECRET by Robert Franklin. The English spy network was in it’s infancy at this time. Lord Stuart de Rothesay, a diplomat and spy was involved in the political machinations surrounding key events in Europe during the nineteenth century. The first James Bond perhaps? He is the inspiration for the third novel in the Mayfair Spy Series, which will be published in August.

For more on de Rothesay I have an article in CASTLES, CUSTOMS, AND KINGS True tales by English Historical Fiction Authors, published by Madison Street Publishing.

Do you have a video trailer to share with us?

You can follow this link to the Book video (or scroll to the bottom of the article).

At present, I’m working on the Third book in the Mayfair Spy Series. It is January 1820 and George III has died. My hero, Flynn, Lord Montsimon, is an Irish diplomat and private investigator for King George IV who is determined to gain a divorce from Queen Caroline. George sends Flynn on an unusual mission, which does not require his diplomatic skills so much as solving an intriguing mystery. When widow, Althea, Lady Brookwood, unwittingly becomes involved, Flynn’s life becomes even more complicated as he deals with schemers, a romance, and something he thought long buried, which forces him to deal with his past.

What are you passionate about?

I have a passion for stylish,black and white film noir movies of the 1940s and 50s.Writers tend to gather information from everywhere, and I believe I’ve learned something about thinking big when plotting crime and mystery stories.

And these have it all; they are about greed, jealousy, suspicion and double crosses,flawed heroes and cynical private detectives indulging in sexy banter with femme fatales. They have a recognizable style:dramatic stylized imagery, convoluted story lines, flashbacks and narration, and hard-boiled repartee.Quite brave and experimental at times, like LADY IN THE LAKE, for example, which was shot in first person point of view, where we only see the protagonist, Philip Marlowe in mirrors.

My favorites: SCARLET STREET, DOUBLE INDEMNITY, SORRY, WRONG NUMBER, LAURA, THE LADY FROM SHANGHAI, THE ASPHALT JUNGLE, THE MALTESE FALCON, THE BIG SLEEP, KEY LARGO, and Hitchcock’s: REBECCA, SUSPICION, SPELLBOUND, NOTORIOUS, SHADOW OF A DOUBT and STRANGERS ON A TRAIN.

Maggie Andersen is an Australian author with a BA in English and an MA in Creative Writing. She and her lawyer husband are empty nesters, living in the countryside outside Sydney with their cat and the demanding wildlife. Parrots demand seed, possums fruit, ducks swim in the stream at the bottom of the garden, and the neighbors chickens roam their yard providing wonderful eggs. She began writing adventure stories at age eight. She writes historical romance, contemporary romantic suspense and young adult novels.

To learn more about Maggie, please visit her website.