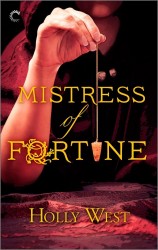 Okay, the moonwalking part is totally made up, but the rest—especially the dog petting bit—is all true. No, really.

West says each of these hobbies play a role in feeding her creative well, an important motivator for the pastime that truly owns her heart: writing.

Before West penned MISTRESS OF FORTUNE, a hardboiled historical mystery, West studied screenwriting, and even drafted a couple of scripts, now stuffed into a drawer while she navigates the similar, and yet vastly different, world of novel writing. The screenwriting lessons, however, remain top of mind, particularly when it comes to mastering the art of storytelling.

“Studying screenwriting and watching films is a great way to learn story structure,” she says. “I’d advise anyone writing novels—especially genre fiction—to sit down and watch a few films in your genre. Pay attention to the story elements: how and when characters are introduced, where the ‘turning point’ scenes occur, how the climax is paced, and so on.”

For MISTRESS OF FORTUNE, West also leaned on a bit of unorthodox research. Her protagonist, Isabel Wilde, is a charlatan—and makes no pretenses about it. To better portray her character’s guise as a gifted soothsayer, West visited a fortuneteller, though admits, she didn’t have high expectations for accuracy.

“I don’t believe in fortunetelling, astrology, tarot reading and the like,” she says. “Practitioners use intuition and clever questions to manipulate their customers into thinking they’ve ‘predicted’ the future. The book is set in 17th century London and there were very few professions available to women at the time. I liked the idea that Isabel would rather become a fortuneteller than a wife, a prostitute, a chambermaid, or one of the other few, but unappealing, roles left to women.”

Because MISTRESS OF FORTUNE is a digital first imprint, social media will, of course, play a significant role in her promotional efforts. But truthfully, she began marketing her book online almost as soon as she started writing it.

“My social media philosophy is all about creating and fostering relationships, having conversations,” she says. “Twitter, especially, has been invaluable to me in my publishing career, simply for the friendships and contacts I’ve made through it.”

In fact, her 140-character (or less) Twitter blurb for MISTRESS OF FORTUNE was envisioned by one of those friends, Thomas Pluck.

His palm said he’d have a long life. Fate disagreed.

Intrigued? Perhaps a teaser chapter on her website will seal the deal, and showcase West’s serious writing chops. While Mistress is her novel debut, it’s clear she’s studied the craft of writing—beginning with the most simple, but effective strategy for success: Read.

“And of course, Judy Blume,” she says. “She’s the author who made me want to write novels in the first place.”

For the craft side of things, West reverts back to her roots and points to SAVE THE CAT by Blake Snyder and a blog called “Screenwriting Tricks for Authors” by Alexandra Sokoloff as great resources.

And, from her own experience, West advises new writers to avoid “rushing into self publishing.” Although a viable alternative to traditional publishing, West is grateful for the editorial advice she received from Carina Press.

“If I’d self-published MISTRESS OF FORTUNE when I first intended to, it wouldn’t be the book it is now,” she says. “My editor really helped me take it to the next level even after I’d already had it professionally edited myself.”

But don’t take her word for it—read it for yourself. 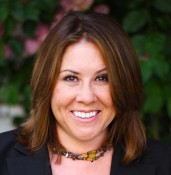 Holly West is the author of the Mistress of Fortune series (Carina Press), set in 17th century London and featuring amateur sleuth Isabel Wilde, a mistress to King Charles II who secretly makes her living as a fortuneteller. Her short crime fiction has also been featured in several anthologies, and online at Shotgunhoney.net. She lives, reads, and writes in Los Angeles with her husband, Mick, and dog, Stella.