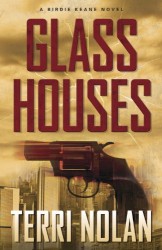 Terri Nolan wowed the thriller world with her first novel that featured investigative journalist Birdie Keane, titled BURDEN OF TRUTH.  Now Birdie is back in another terrific thriller, GLASS HOUSES.

When investigative journalist Birdie Keane’s latest story reveals the shocking truth about a famous cold case, she teams up with her cousin, homicide detective Thom Keane, to deal with the aftermath. The story also gets the attention of a serial killer armed with a revolver and a house key who is killing people in their sleep and finds it amusing to taunt the cousins.

Terri Nolan took some time to chat with THE BIG THRILL.

What sparked the idea for Glass Houses?

I decided to marry two separate ideas. First, I wanted to delve into the Keane family as character and explore how families shape individuals within a clannish environment. I was especially taken with the idea of pairing two members as dual protagonists. Second, I continue to be fascinated and repelled by the complicated housing issues here in Los Angeles and how corporations and investor groups are driving the home ownership market further away from families.

When you were writing BURDEN OF TRUTH, did you envision Birdie and Thom as series characters?

I did. BURDEN OF TRUTH was Birdie’s personal story, and I loved how the family dynamic expressed itself within her bubble. I wanted to explore this concept in depth and pair her with a family member. Thom was an easy choice because he’s a homicide detective. Police and journalistic investigations take similar routes in service to the truth, but with a different set of guidelines and rules. It was fun to see Birdie the journalist and Thom the detective tackle the same case and work together to solve murder.

Is the world of investigative journalism dead?

No, but it has changed in the last several decades. Investigative journalists bring to light what someone doesn’t want the world to see. Or they take us deeper into the story. It requires a major commitment by newspapers and magazines to see the value of a long range campaign to get at the truth of a story. Shining the light takes patience, time, and money. Print journalism is shrinking because the corporations that run print news want to feed us the quick hits to compete with the immediacy of the Internet. From where I sit there is a basic lack of vision.

What aspects of the mystery/thriller genre do you enjoy most in your writing?

The romance. How do people find love in the midst of murder and round the clock tension? How does an investigator, used to seeing the worst, carve some humanity to share with another human? There was a movie I saw last month called DEAD MAN DOWN about this very topic. It came out in 2013 and I wondered how in the heck I had missed it. The filmmakers did an excellent job marrying the romance with the action and thrills.

I just finished the third in the series and it completes the story arc left unfinished in BURDEN OF TRUTH that continues through GLASS HOUSES. I totally love it. It’s a romantic thriller and, believe it or not, is edgier than the first two. 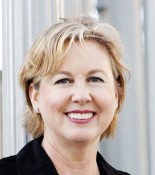 Terri Nolan is Los Angeles born and bred. She currently lives in Orange County. She earned a B.A. in Radio/Television from the University of Texas at Arlington. Her novels include GLASS HOUSES and BURDEN OF TRUTH.

To learn more about Terri, please visit her website.