A series of unexplained phenomena create shock-waves across the globe – a huge religious statue moves its arm, and there’s a spate of floods and earthquakes. Many think it’s the end of the world…

Investigative journalist Alyssa Durham receives a call from an old friend claiming that these phenomena may not be entirely natural, but when he is assassinated in front of her, she finds herself on the run for her life.

Alyssa teams up with Jack Murray, a scientist from a secretive government research laboratory, to uncover the truth. But who wants them dead, and what are they trying to protect?

As chaos descends, Alyssa and Jack are drawn into a battle against an unknown enemy with the highest possible stakes, because one thing they’ve learnt is that nothing is safe from extinction…

“A thrill a minute ride of a book.” –Simon Toyne, bestselling author of SANCTUS

“An absorbing, rollercoaster of a read.” –Elly Griffiths 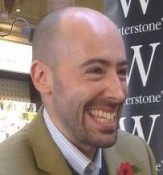 J.T. Brannan is the Bradford-born author of internationally published high concept thrillers, blending reality and fiction. His debut novel ORIGIN is being translated into eight foreign languages. Trained as a British Army officer at Sandhurst, before deciding to pursue a writing career, he is a former national Karate champion and doorman. He now writes full-time, and teaches martial arts in Harrogate, where he lives with his wife and two young children.

To learn more about J. T., please visit his website.