The summer I turned 15, my best friend handed me a dog-eared paperback copy of Michael Crichton’s CONGO.

Read this, he urged. You’ll love it.

I studied the book jacket without enthusiasm. It was 1985, and I was skeptical for several reasons: I had never heard of Michael Crichton; my literary tastes at the time skewed heavily toward fantasy, horror, and classic science fiction; and a book about an expedition into an African jungle in search of ancient diamond mines sounded pretty unoriginal.

But I flipped through the first few pages anyway.

And then I couldn’t stop.

Did I mention the killer hippos?

Plastered to the sofa in our family room, wrestling with the almost irresistible urge to skip straight to the ending, I discovered the simple but heady pleasures of a well-crafted thriller. By the time I finished the last sentence and finally came up for air, it was late at night—or maybe early in the morning. Who cares? I was exhausted and giddy and wanted more.

So the next day, a bit bleary eyed, I headed to our local bookstore and bought a copy of THE ANDROMEDA STRAIN. As soon as I got home, I settled myself back onto the same sofa and turned to the first page.

It hit me again, immediately: that rush of plunging into a completely absorbing world, this time as an eclectic group of scientists fight a killer disease from space in an isolated government lab.

It was classic Crichton, and the narrative crackled with authenticity. It made me wonder if there really was a secret lab out there, somewhere in the Mojave Desert, tinkering with deadly interstellar pathogens collected by U.S. military satellites.

What particularly impressed me was the way the protagonists used their scientific knowledge to concoct resourceful, and more-or-less plausible, solutions to seemingly insurmountable dilemmas (Incidentally, for those familiar with CONGO and THE ANDROMEDA STRAIN only through the anemic film and TV versions, I strongly recommend the original novels, which still hold up pretty well).

More importantly, though, THE ANDROMEDA STRAIN was scary. It was tense. It was fun.

It was another one sitting, late-night, exhausting read.

Later, after catching up on some much-needed sleep, I scanned Crichton’s bio on the back cover, curious that a medical doctor would (or could, depending on one’s perspective) also write novels. I was not yet interested in going to medical school myself, but I wondered how Crichton’s medical training had influenced his writing, and if it provided him an advantage in adding verisimilitude to medical thrillers like THE ANDROMEDA STRAIN.

I read more thrillers that summer—and many more in the summers that followed—on the sofa in our family room. All of the greats. Tom Clancy. Ken Follett. John Grisham. Scott Turow. I noted how Grisham and Turow pursued their craft even as they practiced law.

I read, and I wrote, and I privately nurtured my dream of one day publishing my own novel.

Eventually, I followed a calling into medicine. But, through all of my years of medical school and residency training, and all of the years that have passed since, the 15-year old kid on the sofa stayed with me—as did my passion for creative writing, and my dream.

After a decade of work, I’ve realized my dream. DOING HARM fuses my love of medicine with the pure, simple joy I first felt reading Michael Crichton novels on my parent’s sofa all those years ago.

Maybe, I hope, maybe…somewhere, a teenager on a sofa will start reading DOING HARM.

And won’t be able to stop. 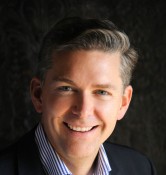 Kelly Parsons is a board-certified urologist with degrees from Stanford University, University of Pennsylvania, and Johns Hopkins, and he is on the faculty at the University of California San Diego. He lives with his family in Southern California. This is his first novel.

To learn more about Kelly, please visit his website.