Author Michael Connelly climbs into the van just before midnight to get to the airport for a 2 a.m. flight. Much like Mickey Haller, the protagonist in Connelly’s THE LINCOLN LAWYER, he’s taking part in something undercover.  Connelly’s most dedicated fans won’t learn what is going on until he returns.

He’s not the only one. Brad Meltzer, Joseph Finder, Kathy Antrim and myself are all on the same undercover mission. We’ve each had, at best, three hours of sleep. It is day three.

Why would the authors of THE LINCOLN LAWYER, PARANOIA (Finder), CAPITAL OFFENSE (Antrim) or the creator of the popular television show DECODED (Meltzer) spend 20-hour days away from home?  Why would Connelly join the ranks of James Rollins or Sandra Brown, authors who have embarked on this mission previously?  Why would authors like Kathy Antrim live out of their bags for a ten-day tour where showering might involve a 100-yard hike in the dark?

Their mission is clear: They’re part of the USO’s Operation Thriller, a tour that brings authors across the globe to meet the men and women who serve.

Likewise, why would an Air Force pilot or Army Ranger or hardened combat Marine have any interest in fiction? They live in a very non-fiction world. An Army Ranger and friend put it best: “We need heroes, too!”

The fictional heroes we write about give something back to the military reader, even if he or she is on their third or fourth tour overseas. As famed author James Salter said in A SPORT AND A PASTIME, “One must have heroes, which is to say, one must create them. And they become real through our envy, our devotion. It is we who give them their majesty, their power, which we ourselves could never possess. And, in turn, they give some back.”

The third installment of the USO tour we aptly named Operation Thriller (author Julie Kramer came up with the name) traveled across the Middle East in a hectic 10-day schedule that covered multiple bases and lots of ground in four countries. With the increased issues of security, not all of the destinations can be mentioned. What can be mentioned is the reason why Operation Thriller has been such a success.

We have thousands in our military who serve in bases deep in deserts with unrecognizable names. They run missions in dry, blistering heat and in continuously dusty outposts.  Also, their airfields serve as global halfway points for transport and supplies to our troops in theater. These valiant troops – the Army sergeants, Marine corporals, Airmen first class, Navy petty officers, and everyone who serves – miss their homes. They want to hear from us.

With behind-the-scenes work that goes on for months before the tour begins, representatives with the USO, Armed Forces Entertainment, the Morale, Welfare and Recreation program (called the MWR), the ITW, 5.11 Tactical, and security forces on the ground, all work together to coordinate schedules, transportation, meals, lodging and a host of other details to get five writers to as many troops as possible in the time allowed. 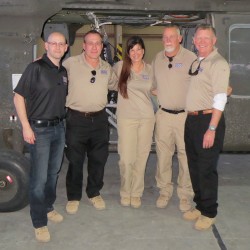 Your chair, Kathy Antrim, like past chair Andy Peterson, had to coordinate the professional lives of five authors to ensure that not one word leaked out about the dates or destinations. Suddenly, for example, Michael Connelly cannot make book signings for a couple of weeks in the fall and no one knows why.

One leak and the tour could be at risk of cancellation.

Meanwhile, the MWR staff and the USO have to coordinate with various base commands to receive the visitors and ensure that as many troops as possible can meet our authors and get our signatures on a book, or a photograph, or a cargo airplane. Yes, indeed – a C-17 that is flying somewhere over the Atlantic bears the autographs of five authors.

Operation Thriller can be exhausting and exhilarating. The quarters vary significantly due to the nature of the base visited. On some, the U.S. military is a temporary visitor to the host country. There, bestselling authors share bunks like a freshman dorm. There may be ten to a room, occasionally sharing space with other non-tour members to fill up the quarters. With some bases, accommodations rival the best of a Holiday Inn.

A tour member has one rule to keep in mind – always be flexible. Authors are never asked to do more than what our troops do, except that, where our Operation Thriller tour is ten days in length, those servicemen and women can spend a year on their tour.

It is a people experience. Michael Connelly summed it up well in a recently posted tour article for CNN (See: ) called “What It Means to Be a Hero.” You see that same experience by a Google search of Operation Thriller for all of the authors who have written about this journey over the last three years. (See: Preston, Rollins, Morrell, Berry, Bowden, Cussler, Peterson, Brown, Reichs, Antrim, Meltzer, Finder, Connelly and Harp.) 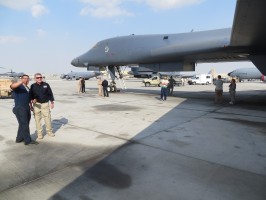 It is also a learning experience, often more for the tour members than the troops. The military is built on the concept of the foxhole – the thought that “I do more” for my fellow foxhole buddy than myself. The military teaches the concept of “we.” And I see it in the post-tour learning curve. Tour authors brag about their fellow tour members despite the opportunity to write about themselves. They cross the room to give each other a hug. They go out of the way to support each other. They become part of a brotherhood. You can only imagine taking that factor up by sharing a tour in combat, sharing a foxhole, sharing the risk of being harmed as our troops often do.

Virtually every base and camp has a library. Many of the libraries are run by MWR. In a recent article, I tried to explain the weight of the passing of time for troops stationed overseas.  The troops have learned that reading, especially thrillers, helps.

In the logistical world of moving thousands of troops both downrange and back home, many sit and wait – for hours upon hours. Whether waiting on the ground for a late aircraft or spending the night crossing the Atlantic, they told us that they love to read by paperback or e-book. Authors can donate electronic downloads of their books to the MWR for the eighty- three library systems around the world. Every author that reads this can contribute to the MWR libraries and those who serve.

The members of the tours try their best to touch as many lives as they can. This year, as a token of appreciation, the ITW gave a challenge coin to the troops. The coin, known well in the military, signifies a gift from a command. Here, the command is the tour group Operation Thriller III and the coin reflects the logo of the ITW.

During the days, the tour visits military units. There, the pride of the troops is evident. They love being firefighters, explosive ordinance experts, flight line mechanics, and more.

In the evenings, the tour sets up camp at a USO Center, MWR tent or a dining facility.  There, the troops come to talk about whatever they want to discuss. They ask questions about how to get published, what it’s like to work with Hollywood, or where did the inspiration for our main characters come from? 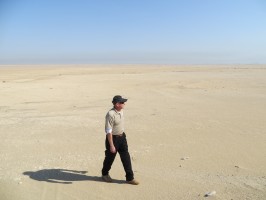 We talked about writing with the newly enlisted that only a few years earlier couldn’t wait for the bell to ring so they could escape from English class. Now, they are different. Now, they love reading and have started to build a passion for writing. Now, after living in the hardship of serving overseas in challenging conditions they develop an interest in new things.

You eat with the troops. In a tradition that we started on Operation Thriller I, the tour members don’t eat together. We each grab a different table. We sat with pilots just in from a mission, Explosive Ordinance Disposal experts, or military customs inspectors who have to make sure that a forgotten bullet in the bottom of a backpack doesn’t make it back to Chicago. We sit with members of the 379th Expeditionary Force Support Squadron or members of the Area support Group for Kuwait. We get to know them, and they get to know us.

Likewise, the authors repeatedly say the same thing – they receive more than they ever give. On some airfields, the lines are out the doors for the chance to meet an author who has created a character that they have read about or seen on the big screen.  With some bases, the security is such that the family can join the military member.  They are called dependents, and they are on “accompanied tours.”

An Air Force officer in southern Turkey brought his ten-year-old daughter to meet these famous authors who have created some popular books. By happenstance, I was behind the two as they left, the daughter holding her dad’s hand; she looked up at him and said, “Dad, that was really cool!”

Yes, it was cool, but not only for her. 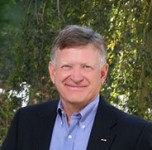 Andy Harp’s most recent novel RETRIBUTION was released on Nov. 15, 2012. Information regarding donation of your books to the MWR can be obtained through his website and Facebook. The ITW particularly wishes to thank 5.11 Tactical for its support of Operation Thriller.