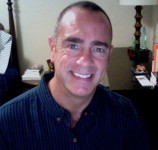 Amy Shojai
Amy Shojai, CABC is a certified animal behavior consultant and author of 24 nonfiction pet care titles. Her debut thriller Lost And Found (Fall 2012) features "dog voice." Amy channels her inner cat/dog in her work and appears as an expert on Animal Planet and CNN, has talked hairballs on the Today Show, toured the country training cats, and serves as an expert witness in dog bite trials. She proudly wears a rhinestone #1-Bitch pin.