This month’s newsletter is a departure in that the featured author lives in Los Angeles and writes mysteries set in Ghana rather than South Africa.  But the issue he discusses is important to any author writing about a culture outside the reader’s home culture,and particularly relevant in South Africa (or Botswana for that matter).

Kwei Quartey’s first book WIFE OF THE GODS introduced a memorable new detective, Darko Dawson, in Accra, Ghana. That book met enthusiastic critical acclaim, and was followed by the quite different but equally intriguing CHILDREN OF THE STREET. Michael Connelly said: “Kwei Quartey does what all the best storytellers do. He takes you to a world you have never seen and makes it as real to you as your own backyard. In CHILDREN OF THE STREET he brings a story that is searing and original and done just right. Inspector Darko Dawson is relentless and I look forward to riding with him again.”

Here Kwei talks about the issues he thinks about as he takes you to that other world.

My Inspector Darko Dawson mystery series is set in the West African coastal nation of Ghana. The first in the series, WIFE OF THE GODS, was published in 2009, the second, CHILDREN OF THE STREET, in 2011, and if all goes well, the third, MURDER AT CAPE THREE POINTS, will come out next year. I grew up in Ghana, leaving in my late teens for the States, where both my writing and medical careers began. My late father was Ghanaian, and my mother is black American. Both were lecturers at the University of Ghana in the suburbs of Accra, the capital.

Like any mystery writer, I strive to create good plots and full, intriguing characters. However, the holy grail for me is to convey the Ghanaian essence authentically without confounding Western readers or relying on too much exposition. The fact is that I am writing primarily for an American audience. Although a certain niche of readers loves being transported to foreign lands via a good mystery, I need to bring them along with me for the ride and not drag them behind me in the dust.

In my novels, some aspects of Ghana’s nature cannot be extricated from the story. That was clear in WIFE OF THE GODS,where beliefs in witchcraft and traditional healing, apart from being part of the plot, highlight how Ghanaians are often comfortable with the coexistence of old and modern ways. However, whether to include certain tidbits of Ghanaian life in my stories can take some deciding. To shake hands the Ghanaian way, you finish up by snapping your thumb and ring finger against the thumb and ring finger of your fellow hand-shaker, while he (it’s more common among males) is doing the same thing at the same time. It’s characteristically Ghanaian, but some might argue that, cute as it may be, its inclusion in a novel doesn’t advance the story. Do I put that in a novel, and does anyone really care?

Like the special handshake, extending a greeting to someone rather formally – good morning/afternoon/evening – is quintessentially Ghanaian, but I must be careful that I don’t overdo it. One of my New York editors crisply commented, “While I realize Ghanaians are more gracious than the average New Yorker, you need to take out some of the greetings and polite chit-chat.”

Other Ghanaian-isms would seem odd or incorrect to my editors and readers and are probably best omitted. “I’ll pick you at the bus station” means, “I’ll pick you up at the bus station.” Affirmatives can be confusing as well. In response to the question, “This meal isn’t spicy?” a waiter might say,“Yes, please.” A Westerner could interpret that as, “Yes, it is spicy,” but the waiter more likely means, “Yes, you are correct. It isn’t spicy.” 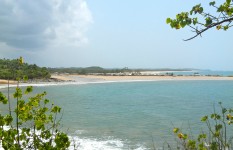 Pidgin English, popular among hip youth, educated or not, can be tough to decipher if one is unaccustomed.I have included it in my novels, but with caution.If I write “I dey go house,” I must use it in enough context that the reader understands it to mean “I’m going home.” Could readers take a whole page of pidgin? Probably not. In the same way, when quoting a character speaking in one of Ghana’s indigenous languages (English is the language of instruction and commerce), is the best approach a single word here or there with an obvious meaning in context, or whole sentences followed by a translation?

In this regard, Westerners often use the word “dialects” to describe the languages of different African ethnic groups, but in Ghana for instance, referring to the languages Ga or Twi as “dialects” is as ridiculous as saying that Swedish is a dialect of Norwegian.

Ghanaians use a wide range of exclamations to express emotion. Several variations of “oh,” “ah,” and “ei” express indignation, excitement, sadness, or disapproval, depending on how they are said. They are a distinctive element of speech in Ghana, but tonally, they are difficult, if not impossible, to represent on the page.

Pacing is important in crime fiction. If I were to accurately represent the true pace at which business is generally conducted in Ghana, my novels would be unacceptably slow for the average western reader. In reality, there’s a lot of “s/he’s not in, come back tomorrow” in Ghanaian life, sometimes delivered with a nonchalance that foreigners might take as rudeness. Although that is usually not the intention, it can be irksome. I do make use of this “delay of services” to some extent in the Darko Dawson series, but in general, Darko gets in touch with people and finds things out a lot more efficiently than he would in the real Ghana.

Darko also lives more comfortably than he would in real life as a detective at his rank and salary level. Policemen and women in Ghana do not make much money. Even some chief inspectors, a respectable rank, live in cramped and dilapidated single-room barracks. Although the Dawson family has its financial constraints, it could be much worse.Nevertheless, I made a conscious decision that I did not want dire economic conditions to be so overwhelming in my novels that they distract from Darko’s raison d’être: solving mysteries.

Ghana can be a country of paradoxes, progressing in some ways while coming up short in others, which is what makes it so interesting to me as a setting. My job is to portray all that complexity in a comprehensible and entertaining way, and keep my readers coming back to see how Darko, his family, and his country grow.