In the upcoming novel from Toby Tate, LILITH, something has come aboard the U.S. Navy’s newest state-of-the-art super carrier, the USS Gerald Ford, something supernatural and as ancient as time itself. And it’s taking over the crew one by one.

Reporter Hunter Singleton and his wife Lisa, guests invited aboard to witness a routine training mission off the coast of North Carolina, soon learn that the CIA is on board as well, and that some of the ship’s crew are acting irrationally, even violently. When an unexpected monster hurricane slams New York, the ship rushes to assist in the aftermath, and Hunter, Lisa and the crew are faced with the terrifying realization that whatever has come aboard the Ford must be stopped before it is set free on the streets of Manhattan. The clock is ticking…and Time itself is running out.

How did the idea for LILITH come about?

I love the idea of taking something from mythical lore and putting it in a modern setting, especially in a place as isolated and high-tech as an aircraft carrier at sea. I had already written a short story about a U.S. Navy ship far out in the Atlantic with a creature on board that kills everyone in the crew except for one guy, who turns out to be his brother. I kind of took that story and expanded on it, and made the antagonist a female, which I thought added an interesting flavor to the story. I also love military thrillers and adventure novels as much as I love horror, and I always wanted to write a book that could bring all that together in one story.

What kind of research did you have to do for LILITH?

I had already spent a few years in the Navy, so I had some knowledge of life aboard ship. I spent a couple of days aboard the USS Harry S. Truman and was able to interview pilots, the ship’s crew and the Captain. But I really wanted to make sure everything was as current and realistic as possible, so I put up some posts on a couple of writer’s sites looking for people either in the Navy or working for the Navy. I found the person I needed, a retired commander that had extensive knowledge of aircraft carriers and their crews. I also needed to know about aspects of the nuclear propulsion system and found a guy who used to be a nuclear electrician. The second half of the story takes place in the abandoned New York City subway system, and I managed to find quite a few videos that people had taken down there. It’s a pretty amazing place—a world all its own. Then there were the weapons, the CIA, the mythology…It took months of research before I could even begin to write the story.

Can you tell us about Hunter Singleton?

Hunter Singleton is the main protagonist, although his wife, Lisa, also plays a huge part. He’s a reporter for a small-town newspaper in North Carolina who ends up getting a story even bigger than he could have imagined. Hunter is somewhat of a wise-ass, much like myself, and a bit overconfident at times. He’s half Cherokee, half Caucasian, and was adopted as a baby in Oklahoma. He spends the better part of the book trying to save his wife, himself and ultimately, Manhattan Island. He loves his wife, who is pregnant, and wants to get her out of this situation, but also wants to stop the evil that threatens their world, so he’s kind of conflicted and gets into some pretty hairy situations.

What can you share with us about the antagonist?

I can’t say too much without giving the story away, but Lilith is a woman with deep emotional problems who has kind of a vendetta against humanity. She manages to get aboard the carrier with the other news crews who are there to watch the ship go through its shakedown cruise, which is kind of a way to show it off to the world and make sure things are in top working order. There’s a very good reason why she picks that particular ship, the USS Gerald R. Ford (which hasn’t actually been commissioned yet in real life) and you’ll find out about that in the story. She also believes herself to be a descendent of the very first Lilith.

Is LILITH a direct sequel to your previous novel?

LILITH is related to the previous novel only in that the two main characters return for this new adventure, but most of their history from the first book is mentioned in LILITH, so it pretty much stands on its own.

LILITH depicts a hurricane hitting Manhattan; did the recent events of the storm Sandy create any echo or ripple effect in your novel?

It was a pretty bizarre coincidence that Sandy hit just a few months after I finished the final edits for LILITH, but there were no last-minute changes because of it. The storm in my book is much, much stronger (category five), but it also moves about three times faster and is gone before it can cause as much flooding damage as Sandy did.

Your website shows your passion for music. Does it have any influence on your writing?

I am a music lover, also a musician, songwriter and studio engineer, but it really hasn’t had much more than a superficial influence on my writing. I have had several ideas, however, about using characters that are musicians, and may do so at a later date.

I always love this question, because I’m always working on something new. I just finished writing a novella and hopefully will see it get published within the next year. It’s a straight up horror story about an ancient Persian rug instilled with dark, supernatural forces that kind of wreak havoc on one man’s life. I’m also finishing up a young adult sci-fi thriller about a 16-year-old MIT student whose physicist father discovers a way to tap into the power of the Higgs boson, or the God Particle as it’s called. He disappears and she has to go through hell to find him. It’s a really fun book. Beyond that, I’ll be writing a sequel to LILITH that will have some international intrigue and send my main character into the most dangerous and horrifying experience of his life.

Will you be participating in any conferences or book tours for LILITH?

I may be attending the World Horror Convention in New Orleans in June, but that’s still up in the air. I’ll probably do some book signings in my home state of North Carolina and in Virginia, possibly in Georgia and some other places. I’ll post dates on my Facebook page when I find out.

I just want to add that the real heroes in LILITH are the men and women that serve in the CIA and in the U.S. military, who go out there each and every day and put their lives on the line to protect our freedoms here in the states and all over the world. I really wanted to convey their bravery under pressure, and I think my book does that quite nicely, because they kick some serious ass in LILITH.

Share a couple of favorite jacket blurbs or reviews

“…takes us briskly along a surprising path from the real to the utterly fantastic.” —Warren Fahy, international bestselling author of FRAGMENT and PANDEMONIUM

“Toby Tate’s work is menacing and original, and LILITH is an adrenaline rush of a novel, equal parts horror, military thriller and full-throttle adventure that will leave you breathless and wanting more.” —Greg F. Gifune, bestselling author of GARDENS OF NIGHT and APARTMENT SEVEN 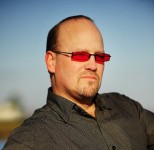 Toby Tate has been a writer since about the age of 12, when he first began writing short stories and publishing his own movie monster magazine. Toby is also a songwriter and musician. LILITH is his second novel.