Readers pick up a thriller novel when they feel the urge to explore the dark, sordid depths of human behavior and psychology. Thriller novels allow readers to venture – vicariously – into the dangerous corners of the world and face the most nefarious of villains, all while remaining in the comfort and safety of their favorite reading chair.  Given the ominous and bone-chilling nature of thrillers, it might seem there would be no place for humor in these novels. Yet, touches of humor can make a nail-biting read all the more engrossing.

An old proverb says “it is always darkest before the dawn.” Similarly, a dark scene can be even more terrifying when contrasted against an adjacent scene at the other end of the spectrum – light. The movie ZOMBIELAND used this technique perfectly, by juxtaposing light, funny scenes in which one of the main characters is on a quest for the last Twinkie with violent action scenes in which the group of survivors is pursued by undead intent on eating their flesh.

Humor acts like salt, bringing out the flavor of a character or story. In BATMAN, the Joker’s goofy makeup is both amusing and disturbing. The contrast between the Joker’s brightly colored face and his dark, vicious nature make him infinitely more intriguing than he would be if he used no cosmetics. We don’t know exactly who the makeup is hiding, though we’re certain it’s no ordinary, playful clown. In SILENCE OF THE LAMBS, murderer Hannibal Lecter uses black humor in the line “I ate his liver with some fava beans and a nice Chianti.” Lecter’s wicked wit is shocking and extremely effective in this piece of dialogue, thus the reason all who have seen the movie remember the chilling line. And who can forget the darkly humorous closing scene of FARGO, when a bumbling kidnapper grinds his partner up in a wood chipper?

Humor is a coping mechanism, both for real-life humans and for characters in books. In my Death and Taxes series, IRS Special Agent Tara Holloway uses humor to deal with the difficulties of hunting down dangerous criminals, ranging from murderous money launderers in DEATH, TAXES, AND A SKINNY NO-WHIP LATTE to soulless terrorists in my latest release, DEATH, TAXES, AND PEACH SANGRIA. Agent Holloway must find humor in her dangerous investigations and heartless targets or risk falling to pieces emotionally. Her tactics for taking down criminals are far from traditional, and the humor provides comic relief for the reader in these intense scenes.

Frightening and funny are the yin and yang, shadow and light, opposite forces coming together to add contrast and depth. Because we read to experience emotion, a story that generates both a tingle along our spines and a tickle in our ribs makes a great read. 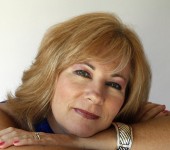 A former CPA/tax attorney, Diane spent several years at an accounting firm where she had the pleasure of working with a partner later charged with tax fraud. She also served a stint as an Assistant Attorney General for the State of Texas under an AG who pled guilty to criminal charges related to the tobacco company lawsuits. Given this work history, Diane decided self-employment might be a good idea. She also realized her experiences with white-collar crime made excellent fodder for a novel. Her fingers hit the keyboard and thus began her humorous “Death and Taxes” romantic mystery series.

The Umbrella Man by Jake Needham