About FINDERS KEEPERS: Thirteen-year-old James Richard McNulty has problems. His mother has just divorced his father. His grades are plummeting. Bullies are menacing him on the school bus. The coach is threatening to kick him off the basketball team. And his smart and lovely “girlfriend” thinks he’s gone insane. Then he finds a suitcase filled with cash – and thinks all his problems are over.

Recently, I interviewed author David Housewright. Here’s what Mr. Housewright had to say about his writing journey and upcoming release.

At what age did you realize that you wanted to be a writer? Was the transition difficult for you?

I’ve always wanted to write.  Always.  Well, except for a brief period when I thought I might make it as a professional baseball player, but that only lasted until I saw my first breaking ball.  It took awhile before I started writing books, yet every job I held prior to that was a writing job.

You’ve written fourteen novels. Is it difficult to maintain your creativity or passion for the next story? Any tips to help with this?

It’s essential that you know what the book is about before you begin.  The best thrillers and mysteries have always been about more than how the loose-cannon hero stops the crazed but brilliant terrorist from detonating the bomb or who killed Mr. Body in the library with a candlestick.  They need to say something that goes beyond the plot points.  JELLY’S GOLD deals with the compromises people make to maintain their safety.  THE TAKING OF LIBBIE, SD explores the desperation of people who can see their way of life drifting away (in this case the depopulation of the Great Plains states).  HIGHWAY 61 shows us the lengths people will go to protect their families.  And so on and so on.  Once you know what the book is about, it becomes much easier to write.

What genre is your current release and what made you decide to write in this genre?

FINDERS KEEPERS is a young adult crime novel and I wrote it for my kids who were in elementary school at the time because they weren’t really old enough for my “adult” crime novels.  ‘Course, I didn’t see it published until they were both in college. Oh, well.

Can you tell us a little something about the main character?

James Richard McNulty is 13-years-old and his life has gone to hell in a hand-basket.  His parents are divorcing, his grades are dropping, he’s in danger of getting tossed from the basketball team and he’s being bullied on the school bus.  None of these problems are particularly unique or earth-shaking, to be sure – unless you’re the 13-year-old.  When you’re in that situation, you often fantasize about your rescue.  If only this would happen, or that…  In McNulty’s case, he finds a suitcase filled with cash and thinks all of his problems are over.  In some ways it’s a fantasy.

What kind of research do you do for your novels?

I take research very seriously.  In FINDERS KEEPERS I was surprised to learn that if you actually did find a suitcase filled with money, you are under no legal obligation to turn it in, although you do have to report it to the IRS, go figure.  The writer owes it to the reader to make sure he gets the details right.  Some authors disagree, arguing that “it’s only fiction.”  No, it’s not.  It’s a real story about real people in the throes of real emotions.  It becomes fiction when you write something that makes the reader stop and say, “That’s not right.”

I’m a plotter.  I outline the novel from beginning to end, although I don’t necessarily follow the outline once I’m writing.  I often veer off in different directions.  The outline makes sure I eventually reach my destination even if I might take a different route than originally planned.

Where is your story set and does that influence the plotlines and characters in your stories?

Every place I write about in my books actually exists. I’ve been there. I will, on occasion, change the name and location for plot reasons – and to avoid getting sued – but they are all real.  I believe in the old saying “If you were from where they are from, and you were taught what they are taught, you’d believe what they believe.”  I carefully use my settings to give readers a sense of what Minnesota and the Twin Cities are like and to give them an idea of the kind of people that live here. It is essential to telling my stories.

Do you belong to any writing groups and if so, do you find them beneficial?

I am not in a writing group, although – I once contributed to an anthology of short stories called SILENCE OF THE LOONS along with 12 other Minnesota authors including Judith Guest and William Kent Krueger.  At the pub party someone asked how many of us were in writing groups and everyone raised their hand but me.  I’ve been wondering if I might not be missing out on something every since.

What writers have influenced your novel or writing style?

Do you have any rituals that you do before starting to write? How about after you complete a book?

I usually wander around the house talking to myself – often aloud – working things out in my head before I start writing.  This used to alarm my family.  Now they tend to ignore me.  I often do the same thing for a week or so after I finish writing, only then I tell myself that’s it, I have no more stories to tell, nothing more to say, I’ll never write again.  The family ignores that, too. 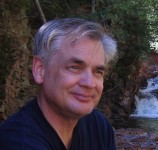 David Housewright has published 14 novels including PENANCE (winner 1996 Edgar Award for Best First Novel from the Mystery Writers of America and nominee for Shamus Award from the Private Eye Writers of America), PRACTICE TO DECEIVE (winner 1998 Minnesota Book Award) and JELLY’S GOLD (winner 2010 Minnesota Book Award). His next novel – THE LAST KIND WORD (St. Martin’s Minotaur) – will be published in June 2013. Housewright’s short stories have appeared in publications as diverse as Ellery Queen’s Mystery Magazine and True Romance as well as mystery anthologies TWIN CITIES NOIR and ONCE UPON A CRIME.

For more information, go to www.virnadepaul.com