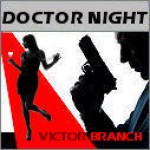 Private Agent Jack Breaker is the premier 21st Century secret agent of last resort for the CIA and a shadowy contracting firm called Compass NEWS (North-East-West-South). He covers the most deadly and dangerous international espionage cases imaginable. Jack meets his match in a global villain who wants to become history’s first world-wide dictator: Doctor Night–with a shadowy army of killers and technical experts.

Anaconda’s executives believe they have a sure hit with OST, which they want to market to the world’s rulers and CEOs. Just think: one shot, one bullet, one dead Hitler or Saddam or Milosevic, like magic–no need for costly, bloody wars. Great for business.

What nobody counted on is a new, global terrorism brokerage called Black Umbrella, which has stolen the OST satellite–and enhanced it to also drop clouds of dirty radioactive material on millions of innocent citizens around the world, unless huge blackmail demands are met. A crisis is at hand. Desperate measures are needed.

Owned by Doctor Night, BLUM suddenly begins demonstrating its sniper capability for horrified CEOs, any one of whom could be the next target of opportunity. In the guise of a grisly game show, Doctor Night starts killing demonstration victims around the world for horrified TV audiences–a young sidewalk artist in London, a surgeon driving to work near San Francisco, a Tokyo executive’s wife beating a rug on a balcony…

Time to call on Jack Breaker, a man who risks all and so far has always gotten the job done. Jack Breaker is a solidly fleshed out character worthy of his famous predecessors, in traditions nobly fashioned by (e.g.) Leslie Charteris (The Saint) and Ian Fleming (James Bond). Jack Breaker is a new and updated 21st Century secret agent, different in many ways. He is holds a Ph.D. in History, a background in Intel and Special Ops, and a top belt in his own martial art, Wing Sun.

He is a man with a dark past he cannot outrun, and a painful secret buried in a lonely, windy hilltop in a remote California canyon. Despite his violent and bloody history, he knows how to enjoy life at every moment. Yes, there are plenty of women attracted to this dangerous, hypnotic man–but Jack Breaker’s women are not airheads or ornaments. Each of his women is a personal friend and passionate lover–typically with a career, a Ph.D., a brilliant and independent mind–and a weakness for a handsome, moody man who sweeps her off her feet, adding a breathless new dimension to her life.

Jack has two main anchors–enigmatic Johannes Rector, CEO of Compass News, and brilliant, willowy Claire Lightfield who sends them her toughest assignments from CIA/Sigma 2020 headquarters in Langley. Jack also has a private, secret life at that remote California ranch–which he will kill to keep secret and safe from all the world’s murderous spies and crime lords.

*Doctor Night*, the first Compass News thriller featuring Jack Breaker, takes us from a ghostly female encounter in a New York City air terminal to a lonely grave on a California hillside, from a mysterious island off Scotland and a foggy suburb of Montreal, to an island off Sicily that gave the world’s volcanoes their name in ancient Roman times–Vulcano.

Checking and counter-checking with the insidious Doctor Night, Jack must also combat the elusive top (female) killer of Black Umbrella, a Eurasian woman named Sombra (Shade). Sombra has kidnapped lovely, gray-eyed Dr. Miranda Coldstream, Ph.D.–Jack’s MI6 partner and lover, upping the personal stakes. But Jack is at his best when his back is to the wall, bullets are flying, and he is the last good man standing.

“Doctor Night is a page-turner, and a fun read. I highly recommend it.” Deborah Cannon, professional field archeologist, published scholar, and acclaimed author of the Raven Series of myth-based thrillers.

Victor Branch is a former U.S. government employee with an advanced management degree from a major university. He later worked in the aerospace and computer information systems industries. He now lives near Los Angeles with his wife, son, and cat. He now writes screenplays and novels full time.