THE INCENSE GAME takes place during one of history’s worst natural disasters—the massive earthquake that devastated Japan in 1703. The shogun’s court is in chaos. Chamberlain Sano Ichiro is struggling to help the survivors when he finds three women dead amid the ruins. They were murdered with poisoned incense. One is an incense teacher with dangerous secrets. Two are the daughters of a powerful lord, who threatens to topple the regime unless Sano tracks down the killer.

Bestselling author Laura Jo Rowland’s Sano Ichiro novels have been labeled “masterful” (PUBLISHERS WEEKLY) and “an exercise in pure entertainment” (WASHINGTON POST). THE INCENSE GAME, her latest novel, has just been released. The author answers a few questions about her newest book:

THE INCENSE GAME is part of a new cycle that deals with real historical events that had big impacts on Sano’s world. The first in the cycle was THE RONIN’S MISTRESS, which was about a controversial murder case that tested the samurai concept of honor. THE INCENSE GAME is about the massive earthquake that struck Japan in 1703 and how it affected the people. I think real events add extra depth to fiction.

Your prose is rich with character development and historical detail. What additional research was needed for THE INCENSE GAME? Where did you find out the details about the earthquake that occurs in the book?

I researched the earthquake. There’s very little information about it, at least in English. The exact death toll is unknown, in part because the government tried to hide the number of its people who were killed. While portraying Edo after the quake, I extrapolated from two natural disasters in my own time, the recent Japan earthquake and Hurricane Katrina. I kept the focus on the characters and their reactions rather than on statistics.

What do you think readers are looking for in historical thrillers today and how does THE INCENSE GAME deliver on this front?

I think readers want a balance of history and thrills. At least that’s what I want. I don’t like books that are so loaded with historical detail that the plot gets lost, or books where there’s so much on action and the pace is so fast that there’s no room for a rich sense of time and place. I think THE INCENSE GAME strikes a good balance.

Kumiko, or incense games during a Kodo ceremony, appear to take place to this day. Have you participated in them yourself?

I haven’t played them myself. I like the idea, but breathing smoke irritates my allergies.

You also write a series featuring Charlotte Bronte. How do you find the time to manage two demanding historical series?

Writing two series at once is rough. I wrote the first Charlotte Bronte book during a period of my life when I had more time and energy. I probably won’t write any more Charlotte books. I’m concentrating on Sano.

What’s next for Sano Ichiro?

I’m finishing the book that will be published in 2013, THE SHOGUN’S DAUGHTER. The death of the shogun’s daughter in 1704 was another real historical event that had big consequences. In my version of the story, she gets murdered, which sets off a firestorm of trouble for Sano. 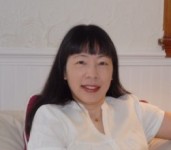 Laura Joh Rowland is the author of the mystery series set in 17th c. Japan that features samurai detective Sano Ichiro. Her work has been published in 13 foreign countries and nominated for the Anthony Award, the Hammett Prize, and the Barnes and Noble Discover Great New Writers Award. Her latest book is The Incense Game. She is also the author of a historical suspense series that stars Charlotte Bronte, the famous Victorian author. Laura lives in New York City.

Where The Dead Fear To Tread by M.R. Gott