Amanda Coetzee was born in Bedford, England, has an honors degree in Performing Arts and performed in several countries in Europe.  She worked in adult education (including a brief tenure at Holloway Women’s Prison) before travelling and eventually falling in love with her husband and South Africa.  She is now deputy principal at a school in Rustenburg (a city in the platinum-mining north west of the country).  She experimented with various genres, but loves mysteries and finally came to the story of Harry O’Connor.

Harry was abandoned as a young boy and adopted by a clan of Irish Travellers (gypsies). There he earns himself the nickname “Badger” by carving out a reputation as a bare-knuckle boxer who never backs down in a fight. As an adult, Badger joins the London Metropolitan Police and severs all ties with the Irish band until the investigation of a missing child marks his return to the world he grew up in.  For me, Badger is one of the most interesting and complex protagonists to enter the mystery genre for many a year.

Amanda’s debut novel – BAD BLOOD – was described by crime writer, Mike Nicol, as “a rollercoaster ride that’ll have your pulse pounding”.  Amanda’s sequel – REDEMPTION SONG – was released in June.  The books are published by Pan Macmillan in South Africa and both are available digitally worldwide at Amazon.com.

I asked Amanda about her writing and how she’d come up with the remarkable Badger:

Badger, aka Harry O’Connor, is a great character!  Abandoned by his mother and raised by the Travellers, he’s tormented by the secrets of his past.  Eventually he rejects his foster family and joins the police.  Can you tell us how you thought of him and how he developed?  And which came first: Badger or the plot of BAD BLOOD?

I think it’s fair to say he came first although in a very real way, the story of Bad Blood is the genesis of Badger. I wanted to create a character that could sustain a series of stories and the idea of a man who was haunted by doubt about his identity, stuck early on in the creative process. The idea that he was rejected by his mother and adopted by a group deemed as society’s outcasts had an intriguing irony. His inherent sense of wrongness comes from not knowing whether there is something wrong with him, or the mother that abandoned him; either way, Badger spends his life running from a mystery that has already defined him.

I found the Travellers’ role in the book fascinating.  You obviously know a great deal about them.  Have you spent time with them, or how did you research their culture?

There are various aspects to the answer of this question. Yes, I spent a great deal of time researching the Pavee, or Irish Travellers, which was harder than I anticipated due to their intensely secretive lifestyle. It was one of the reasons I was drawn to them; their resistance to modern life and ability to resist absorption by mainstream society. They have evolved and been touched by the changes that modern England has faced, but they have retained their ‘otherness’ in deliberate rejection and rebellion of the melting pot of cultures that the world has become.

My fictional clan and characters are a blend of fact and interpretation. I met a small group of Irish Travellers at my high school and was part of a literacy class where we read to them once a week, in order to try to help them catch up. Their sporadic school attendance meant they often had to be schooled separately. They didn’t stay very long but I remember them arriving and leaving together every day on some form of social welfare funded transport and sticking together without embarrassment or shame at their circumstances. Much of Mikey’s character and that of his cousin is based around that short encounter.

On a personal note, my great grandmother had Romany blood, different clan to the Travellers, and I grew up with many of the burdensome superstitions as commonplace background to my childhood. It was somewhat of an open family secret that we had gypsy blood and my nan used to say that had Hitler won, we would have disappeared in the camps. I have a huge extended family whose identity has fractured over time; my nan was one of 16 children and my mum, one of eight – our family gatherings were terrifying and wonderful at the same time and I sometimes mourn that era of collective identity.  The tales that have been
passed down and the secrets that we whisper from one generation to the next may shape and shade my stories; but I would never acknowledge or identify them as real. A private life should remain just that: private.

People have commented on our Botswana books that “place is a character in its own right.”  Your books are character and action driven.  Do you feel that too much emphasis on place slows down the story?

No I do not. Personally, I find descriptions difficult and struggle to describe the sense of a place, or a sunset or even a smile. Without sounding too pretentious, I think I write with a back-track of music rather than pictorial art. I hear and feel emotion much clearer than I see, and think that is reflected in the shades of my writing. It was with no small sense of personal satisfaction that I created a character with such a physical presence as Badger. Context is critical to every story; I think mine simply focus more on the emotional landscape of the characters than their surroundings. I have tremendous respect for writers that can translate their readers into an alternate or foreign world.

Badger is very susceptible to helping the weak in danger.  In REDEMPTION SONG he has to rescue a woman and her daughter from Albania from a truly amoral villain, JakKraja.  Why Albania?  Was it to juxtapose the Romany people with the Travellers?  Or did you need it for Jak?

It was exactly for that reason; I wanted to show the similarities and differences between the Romany Gypsies and the Irish Travellers when common opinion groups them together. Albania is geographically and culturally complex and susceptible to European snobbery in a symmetry that appealed to me while writing about a cultural group that the Albanians generally treat as second class. It is true about Badger and his inherent need to ‘save’ women in danger; he relives his inability to protect his mother in a perpetual cycle of guilt and attempted redemption.

May we look forward to a future book set in South Africa?  Badger does seem to get around a bit!

Interesting idea! I think Badger as a character will always remain an outsider which provides an opportunity to place him in a variety of contexts and environments, allowing the reader to experience the world from his perspective.

In BAD BLOOD Badger learns not only the reality of his past, but also a great deal about himself.  He has a foster father, a foster mother, and a woman he can love, but he fights to keep them all at arm’s length.  Yet the events force him to realize that he needs them.  Would you comment? 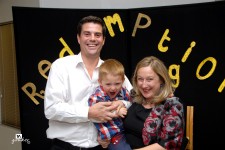 I would say that’s a fair comment. I began by constructing Badger as a man who kept his emotions in check in order to survive them; but realized it is more than a survival mechanism. Badger believes he is tainted, it is at the root of his choice to separate himself from anyone who loves him; he simply cannot risk contaminating them with the poison he keeps hidden. His release is pain, it is the punishment he feels he instinctively deserves and the price he pays to save those he loves. It is an uncomfortable idea; the man that willingly sheds his blood to save those he can never believe himself worthy of. It is probably where the title REDEMPTION SONG originated from; the tremulous hope that Badger could one day love and be loved in return.