Eric Van Lustbader has had a long and successful career in publishing, with over 25 bestsellers under his belt, including the much-loved NINJA series, THE PEARL SAGA of sci fi/fantasy novels, and his latest series of thrillers starring Jack McClure, beginning with FIRST DAUGHTER. He was also tapped to continue Robert Ludlum’s BOURNE series, and has taken that iconic character in exciting new directions over the course of seven new novels, with more to come.

Lustbader is at the top of his game with his most recent books—the next McClure thriller, FATHER NIGHT, and the latest Bourne novel, THE BOURNE IMPERATIVE. THE BIG THRILL sat down with him to talk about his latest works.

What inspires you to continue two separate series, two books a year–and is it difficult to keep them separate?

Not at all.  The universes which Bourne and Jack McClure inhabit are totally different.  I will say that every once in a while a secondary character, like the name of the secretary of defense, can get momentarily confused in my mind.  As for inspiration, I live to write. I’m happiest when the story and characters are humming along. I’m transported into another dimension entirely, without time or worry.

FATHER NIGHT is your fourth McClure novel, I believe. You’ve been able to keep the character evolving in interesting ways–has that been a challenge for you? How do you keep track of where your series characters have been, and where they’re going?

Oh, keeping track is no problem.  When I start a series, I have a very clear idea of the universe and where my main characters are going – how they’re going to evolve and who will have an impact on them.  Case in point: when I created Annika Dementieva, I knew she would be the major influence on Jack’s life, that his relationship with her would take him to some very dark corners of his universe, and that he would never be the same.

What was the inspiration for using dyslexia as a strength, rather than a disability?

I never realized it until later in life, but I myself have a form of dyslexia.  The upside is that it has allowed me to think very quickly and to concentrate on success with a fierceness I otherwise would not have.  I wanted Jack to be different, to have the kind of mind that saw the world in a different way than those around him.  I thought about dyslexia in a completely subconscious way, but once I started my research I discovered so many revelations about myself.  I began to understand myself in a new and different light.  You could say in creating Jack I got to know myself better.

What is your favorite part of FATHER NIGHT?

You may not think so, but that’s like asking which one of your children do you love more?  Having said that, I suppose the end, because it completes Alli’s story arc in the most satisfying way, and also sets up a major turning point in the series, which everyone will find out about next year in the fifth book, BELOVED ENEMY.

You had a very successful NINJA series earlier in your career. How do you feel you’ve grown as a writer since then, and would you ever want to return to that world?

Well, all my life I’ve hated sameness.  I’m easily bored.  I don’t like to write the same thing over and over, so all my writing constantly evolves.  I keep learning, both from living life and from a series of excellent editors I’ve been lucky enough to work with.  THE NINJA was of a certain time and place – it set off a world-wide interest and launched my career.  Those were the days when Japan was a major player on the world stage.  Here, in America, we were worried about the Japanese buying up our businesses and real estate.  Then the bubble economy in Japan imploded and now everything has changed.  No one cares about Japan or the Japanese.  The focus has shifted to terrorism, the Middle East, and now China, a country so desperate for energy to run its infrastructure it’s buying up natural resource companies all over the world.  I’ve yet to figure out how Nicholas Linnear and, more specifically ninjutsu, fit into such a world.  In some ways, it would feel like going backward.

Let’s talk about the Bourne novels. How difficult was it writing a character someone else had originally created?

Not at all difficult.  Bob and I were good friends.  We met in 1980, when THE NINJA and THE BOURNE IDENTITY were published.  Bob had read THE NINJA and loved it.  We spent a lot of time together talking about what makes a modern-day thriller tick – story and character arcs.  We discussed our respective main characters – what made them special and how much of ourselves were in them.  When I was asked to take over the series, it was an easy and natural transition.

Did Robert Ludlum leave you with any outlines, or pieces of Jason Bourne that helped you continue on, or are the new books completely your own creation?

Bob never envisioned Bourne as a serial character.  Apart from two characters who are killed off in the first pages of THE BOURNE LEGACY, everything and everyone is my own creation.  In fact, after reading THE BOURNE BETRAYAL, the second of my Bourne novels, the executor of Bob’s estate told me that Bourne was now my character.

Is there another Bourne novel on the horizon?

Of course.  THE BOURNE RETRIBUTION will be published in June or July of 2013.

Which do you enjoy writing more, heroes or villains? Why?

I used to say villains because they’re often more fun than heroes, but with Jack McClure now I can’t make that statement.  His character is so complex and constantly evolving that I get as much enjoyment out of writing him as I do those who oppose him.

I have no idea.  To my mind, the wellspring of the creative process resides wholly in the subconscious.  I can’t tell you how ideas for story lines or characters come to me except to say that everything I see, hear, and read about gets stored and filtered, and plays some part in the process.

You’re well known for your historical research in novels such as THE TESTAMENT. How much do you do ahead of time? Do you travel extensively, delve into dusty libraries, write everything out accurately? Or is it more to support the story as it comes to you?

There’s no real answer to that question.  At times, I do the research beforehand – THE NINJA is a perfect case in point.  Also THE TESTAMENT, where I did an extensive amount of research on various religious orders, Gnosticism, schisms within the Catholic church both well and little known.  At other times, I’ll research as I go along, or do some preliminary research before starting to write and then continue simultaneous with the writing.

You seem to have a pretty consistent father-son theme running through many of your novels. Any particular reason?

I loved my father, but he was a very closed person.  I felt I never got to know him, not because I let chances go by, but because he wouldn’t let me.  That’s a very sad thing.  You could say I’m working out my grief in my novels.

As I said, FATHER NIGHT completes a four-book story arc and character arc for Alli.  In BELOVED ENEMY, the concentration is wholly on Jack and Annika – their complex and, at times, frightening relationship.  The series becomes more character oriented, trying to answer a question I don’t think can be easily answered: how can you love someone who is trying to kill you?  BELOVED ENEMY takes Jack – and the series – into entirely new territory.  And there are a number of mind-bending reveals about Annika that will make the reader wonder whether they ever really knew her.

As for Bourne, he’s on a mission to avenge himself against the people responsible for Rebeka’s death – hence the title, THE BOURNE RETRIBUTION.  Many surprises await the readers who come along for the wild ride. 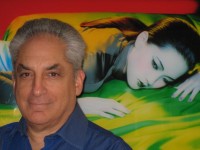 Eric Van Lustbader is the author of many New York Times bestselling thrillers, including FIRST DAUGHTER, LAST SNOW and BLOOD TRUST. Lustbader was chosen by Robert Ludlum’s estate to continue the Jason Bourne series, and his Bourne novels include THE BOURNE LEGACY and THE BOURNE BETRAYAL. He and his wife live in New York City and on the South Fork of Long Island.