Her latest tale of suspense features a wealthy financier charged with attacking a hotel maid – a ripped from the headlines premise. As an added treat, readers get an inside look at the ruthless business of gourmet dining.  Booklist gave NIGHT WATCH a starred review, calling it “a real winner from a legal thriller master.”

Here in THE BIG THRILL, Fairstein discusses the difficulty of finishing NIGHT WATCH after the death of her husband, what scares her most about changes in the publishing industry, and her take on the 50 SHADES OF GREY phenomenon.

What are the challenges of fictionalizing a real life sex scandal for NIGHT WATCH?

In most of my novels I have avoided ripping cases from the headlines.  I have always drawn on my thirty years of prosecutorial experience, so there are motives from high-profile cases and characters that resemble some of my perps.  Most of the time, I have preferred to use my imagination.  I had already started this manuscript when the DSK case occurred.  Not only did the media want my opinion in the form of a talking head, but everywhere I went, the first question people asked me was ‘what do you think really happened in that hotel room?’ Of course, as the Manhattan Sex Crimes prosecutor, that one would have fallen under my jurisdiction, so it was impossible for me to stop imagining the twists and turns.  I wanted Alex Cooper to face some of the same problems, and I wanted readers to see the nuanced issues that present themselves in just about every situation in which a crime is untangled.

Do you ever worry about being sued by people who think your characters are based on them? (You know how lawyers can be.)

Lawsuits?  Did you say lawsuits?  I’m smiling as I answer this.  Yes, we live in a very litigious society.  But my characters are quite different from the real life people, and the story in my novel is not the story reported in the papers.  I like taking the seed of an idea and running with it – all the ‘what if’s’ and the excitement of creating something which takes a new direction.

What have been the biggest changes in sex crime investigation since your debut, FINAL JEOPARDY, came out in 1996?

I could go on for quite a while with this answer.  I joined the Manhattan DA’s Office as a rookie prosecutor in 1972.  There were 7 women on a legal staff of 200, and we were not allowed to try homicides or violent crimes.  More than one thousand men were arrested for sex crimes in New York City the preceding year, and only 18 were convicted.  Our laws were archaic – adopted from 16th century British cases – and public attitudes about the crimes were even worse.  So my colleagues and I started blasting away to get the bad laws in the 70’s and early 80’s changed – getting rid of the ancient ‘corroboration’ requirement, implementing rape shield laws, changing marital rape laws – lots and lots of work.  Then, in 1986, I was one of the first prosecutors introduced to a scientific technology just being used in forensics.  DNA – now my three favorite letters of the alphabet – revolutionized the criminal justice system, and continues to do so as the science itself evolves.  I tried to use it in a murder case in 1987 – but the court ruled that it wasn’t a reliable method – so the jury never heard about the DNA match between the killer, the murder weapon, and the victim.  It wasn’t until 1989 that American courts recognized DNA as a valid technique.

What never changes is the need for great old-fashioned detective work.  DNA can connect an individual to a crime scene – say, saliva on a cigarette butt – but that doesn’t establish he was the killer.  I wouldn’t trade anything for my experience working with the best detectives in the business.  It’s easy for me to stay current.  I’m still a lawyer, and still handle investigations.  I take training courses in forensics every year, and I teach prosecutors and police all over the country.  That part of my work still gives me enormous pleasure.

Your use of historic New York landmarks make your books distinctive. What famous locations can we look forward to in the pages of NIGHT WATCH? 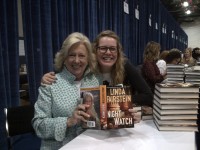 It was my own decision to use New York City as a character in the books.  I love exploring places that are so familiar to all of us – whether you’ve been here or never will be – and yet they have sinister backgrounds or dark secrets.  Alex Cooper  has been dating French restaurateur Luc Rouget for several books now, and Luc’s coming to New York to re-open the great classic restaurant, Lutece.  It’s a world that seems so glamorous and elegant, but is a dangerous business – expensive and high-stakes, very cutthroat.  The novel starts at Luc’s home in the South of France – a stunning village on the Cote d’Azur called Mougins – and then moves back to Manhattan.  Lots of landmark restaurants, like the ‘’21 Club”, which had a fascinating history during Prohibition, and the mysterious Tiro a Segno (a members only dining club – with a rifle range in the basement), play a role in the story.  Luc is based on a great friend of mine who really did create Lutece – and I had so many notebooks full of stories from our time together that I was looking forward to getting into this subject.

Are you a gourmet cook, or do you just like to eat well?  How do you research your restaurant scenes?

If you’ve followed Coop from the first book, you know that she doesn’t cook!  That’s a trait my protagonist got straight from me.  My prosecutorial job had such irregular hours that it was always impossible to plan a strategy for dining at home, so my husband and I ate out way too often.  I researched most of my restaurant scenes by taking Coop to the places I like best.  Hey, she has to eat somewhere, so why not my favorites?  Ken Aretsky, the owner of Patroon, is one of my best friends.  He’s got a fantastic restaurant and a divine private wine cellar, and he welcomed me often for research.  Coop and her pals always have a meal at Primola – which is now one of Don Imus’ favorite places.  My book jackets are all over the walls, which makes it great fun to be there.  I love Rao’s, too, and set a scene there in FINAL JEOPARDY.  I know that if any ITW members go into my two favorites – Primola or Patroon – and tell the owners I sent you, you’ll be treated like royalty – and who knows, maybe a cocktail on the house?  And of course, it all goes back to my friend Andre Surmain, who is one of the great showmen and geniuses in that business.

Alex Cooper, and her sidekick, homicide cop Mike Chapman, have not slept together, despite this being your 14th book. Come on, they’re both single and work late hours together amid danger.   If I wasn’t so busy with my own deadlines, I’d be tempted to write a fan fiction version in which they end up in a steamy sex scene. What kind of feedback do you get from your readers about their relationship?

The question I get most often, in bookstore signings and in fan mail on my site, is when Alex and Mike are going to get together.  Hey, it’s 14 books but it’s only 2 and ½ years!  I struggle with this issue all the time.  Half the readers want to see it happen, and the other half enjoy the sexual tension and think getting them in bed together would spoil things going forward.  When I was a kid in the DA’s office, I worked with lots of smart, sexy, good-humored cops – Mike Chapman is a composite of the guys I liked best – but I didn’t get in bed with them.  And some of my colleagues wound up married to great detectives.  As Coop says, once she crosses that line, there’s no question the DA wouldn’t let her work with Chapman any more, so I think that’s on hold for the moment.  Things change, you know….so don’t give up hope.  I am often reminded of the very popular television show, MOONLIGHTING.  It was a huge hit for several seasons, in part because of the sexual tension between Cybil Sheppard and Bruce Willis.  The moment they got in bed together, the show fizzled.  Please write your version, Julie!  I’ve written their first sex scene, in my head, about fifty times.  I’m sure that day will come.

Speaking of sex scenes, have you read 50 SHADES OF GREY?

Publishing is undergoing enormous changes from e-books to self-publishing to the demise of bookstores to the demands of multiple books a year from authors. Does your success insulate you from this debate or do you have worries about the future of publishing?

I worry about the future of publishing constantly.  I think we all saw the changes coming a few years back, but no one I know thought they would happen at the speed they have.  Some of it is concern for me and for my colleagues.  I like this world a lot, and I respect and like the people in it, and some of them simply won’t make it through.  There is also the bigger fear I have about two of my favorite things in the world – bookstores and libraries.  I love spending time in both of them, and there is nothing to insulate any of us from worry about what the future is for great booksellers, and my beloved libraries.  I love to write.  And I’m one of those dinosaurs who prefers holding and reading and smelling a hardcover book.

NIGHT WATCH is your first book after the death of your husband – political lawyer and public servant Justin Feldman. What kind of role did he play in your writing life?

Thank you for mentioning Justin.  He was a truly great man, and a delightful guy. When I wanted to make the transition from the law to literature – to try to write – he was the single person who believed in me from the start.  We had a great marriage, as my friends know, and he loved the world into which this career transported me.  He was not only my best fan, but my toughest critic.  Justin read the first 150 pages of my NIGHT WATCH manuscript, and as he did with every book, he had some great comments and made some important edits.

How has his death affected your writing?

For months, I couldn’t write a word. But Justin was always on my shoulder – if you will – and that eventually helped me regain my focus and finish the book. I miss him terribly, as all those writers and readers who knew him will understand.

LINDA FAIRSTEIN was the chief of the Sex Crimes Unit of the district attorney’s office in Manhattan for more than two decades and is America’s foremost legal expert on crimes of sexual assault and domestic violence. Her Alexandra Cooper novels are international bestsellers and have been translated into more than a dozen languages. She lives in Manhattan and on Martha’s Vineyard.

To learn more about Linda Fairstein please visit her website.

Julie Kramer has moved from journalist to novelist and now writes a bestselling series set in the desperate world of television news. SHUNNING SARAH will be released August 7 by Atria/Emily Bestler Books.

“Remember Witness – that truly thrilling movie with Harrison Ford in his heyday? Shunning Sarah is an even better suspense story.” ~James Patterson