Logan Finch started out as a lawyer, the last man you’d expect to switch into a career as a bodyguard. Serial killer Chase Black is the last person you’d expect him to be protecting.

An unpopular and dangerous client — who might be innocent. But if he is, the real killer is still out there. Can Logan spot him before it’s too late?

That’s the setup for PROTECTION, the latest thriller from Scottish author GJ Moffat, who’s making a similarly switch from practicing commercial litigation to writing thrillers. It’d be one thing for a lawyer to write about other lawyers (John Grisham) or for prosecutors and defense attorneys to write gritty crime stories.

But Moffat has a knack for the hard side, with PROTECTION the latest in a series of well-received thrillers that started with DAISYCHAIN, the first book that the lawyer Logan Finch teamed up with tough-guy Alex Cahill.

How is PROTECTION different from your first books?

It completes my intended move away from the narrow geographic constraints of Scottish crime fiction.  It is, apart from a few opening scenes, set in Colorado and London.

I always wanted to use a broader canvas and expanding the geographic scope of it has allowed me to do that.  It builds on the previous book (BLINDSIDE) in that sense.

In what ways have Logan and Alex suffered and changed in the series — are they basically the same since the start, or have they evolved?

Cahill was always intended to be pretty much a fully formed character from the start. Logan was conceived differently – to start as a lawyer with few responsibilities and great ambition and to grow and change.

I see PROTECTION as the culmination of his first-stage development.  He has effectively left the law behind and now works in Cahill’s team as a bodyguard.  And the relationship with his daughter has matured progressively from the first book.

Why write thrillers instead of sci-fi, mysteries, fantasy? What do you think thrillers have to say about what’s worth living for and what’s worth dying for?

When I started to write seriously, I decided to write books that I would want to read – which is crime/thrillers.  I feel that in some small way I discover the books like a reader as I write them.

The living and dying question is a big question for all writers.  I suppose that I can only answer it from my own perspective.

I write books where family and friendship are the things worth living and dying for. Which is how I see life.  I hope that my books reflect my moral or ethical centre. 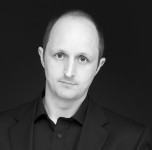 GJ Moffat is a practicing lawyer specializing in commercial litigation. After establishing a successful career at one of Scotland’s top law firms, he decided that he would try to achieve his other ambition – writing fast paced, contemporary crime thrillers.

He was born in Scotland and lives there with his wife and two daughters. There’s also a hamster. He infrequently plays guitar loudly and badly to the annoyance of everyone else.

To learn more about GJ Moffat, please visit his website.