The Frenzy War is the second novel in Gregory Lamberson’s werewolf series “The Frenzy Cycle,” which began with The Frenzy Way. Two years have passed since Captain Tony Mace stopped Janus Farrel, the rogue Wolf who stalked Manhattan. Mace has preserved the secret existence of the peaceful Wolf shadow species, but now a team of assassins descended from the Spanish Inquisition have come to NYC to exterminate the Wolves. The FBI and NYPD form an elite task force to prevent a city wide panic, and Mace is appointed the leader. Multiple factions engage in a secret war that threatens to ignite genocide, and Mace’s reporter wife is hot on the story.

I recently interviewed Gregory Lamberson, author of THE FRENZY WAR.

What is that noise you heard in the night? Was it really a dog barking? Was it truly nothing more than an animal scurrying through the darkness? Or could there be more creatures out there than we’re willing to believe exist, creatures men are unwilling to classify that lurk the night and walk disguised as us during the day?

In THE FRENZY WAR, second book of the Frenzy series, Gregory Lamberson, award winning horror writer, film maker, and founder of the Buffalo Screams Horror Film Festival, takes us on a thrilling journey as one species tries to survive while another seeks to hunt them no matter the cost. These werewolves are not your sparkly unfortunate teenaged cuties who happen to have a lust for blood. THE FRENZY WAR is an action packed story that horror and thriller fans will find right up their alley.

Give us the pitch for THE FRENZY WAR.

Three secret societies duke it out in the streets of New York City: a pack of werewolves who only want to live among us in peace; a team of sword wielding werewolf hunters with ties to the Spanish Inquisition; and an NYPD-FBI joint task force assigned to prevent a panic.  It’s the sequel to my novel THE FRENZY WAY, but that was a police procedural and this is more of a counter-terrorism tale.  It’s my biggest book to date, 450 pages, and I enjoyed juggling the large cast of characters.

At your website I see that you got started in making movies. Tell us about that.

I started working on low budget horror films in 1984, and I’ve written and directed four of my own, two of which – SLIME CITY and its sequel SLIME CITY MASSACRE, have become cult films.  Last year I produced a goofy creature feature called SNOW SHARK: ANCIENT SNOW BEAST, which will be released on DVD this winter`, and in July I’m Line Producing MODEL HUNGER, directed by my friend Debbie Rochon, who’s acted in 200 films.  I enjoy making films, which requires you to assemble a team of people to achieve the impossible, like mercenaries.  For a few weeks we’re as close as family, and then we separate.  We’re basically nomads and circus misfits.  It’s a social activity too, unlike writing.

What is your favorite format to work with books or movies?

I love them both and can’t imagine living without them.  My books are ultimately more satisfying creatively, but filmmaking is the greater challenge, especially on a low budget.  Evey day involves solving a new crisis.  My novels are more serious and ambitious, and my films are meant only to be fun.

What got you turned on to writing horror/monster thrillers, in particular the gore-fest types you write?

I’ve always loved horror and monsters. If drama is conflict, then horror allows you to amplify that conflict and exaggerate raw emotion.  THE FRENZY WAR is the first of my novels that I consider gory, and that was just natural to the story.  Action is the driving element in most of my work, and surprises.

Back to THE FRENZY WAR, and the Frenzy series in general. Most of your previous works seem to deal mostly with zombies. Why’d you choose werewolves for FRENZY?

I actually don’t consider myself “Zombie Guy” or “Werewolf Guy.”  I have a new novella out called CARNAGE ROAD, which owes as much to EASY RIDER and LONESOME DOVE as it does to George Romero.  That’s really the only book I’ve done that I think fits that particular subgenre.  I have an occult detective series called “The Jake Helman Files,” which is my favorite project.  Jake finds himself in a world where religious icons and science are constantly at odds with each other; my versions of Cain and Abel and Adam and Eve have become recurring characters.  Jake has battled everything from a serial killer who steals the souls of his victims to genetically engineered monsters to a creature out of H.P. Lovecraft.  In the second book, DESPERATE SOULS, he took on drug dealers behind a street narcotic called Black Magic; there are classic voodoo style zombies in that one, but they’re just one element.  They return in the fourth book, TORTURED SPIRITS, which comes out in October.  After that, I doubt you’ll ever see another zombie in my work.
My first three books – JOHNNY GRUESOME, PERSONAL DEMONS, and THE FRENZY WAY – were based on screenplays I wrote in the 1980s.  I wrote the screenplay version of THE FRENZY WAY because I thought I could write the best werewolf film ever made  Unfortunately, it would have cost a fortune!  I actually spent about ten years on and off doing research on the novel version – how the NYPD works, worldwide werewolf mythology, and the Spanish inquisition – and after all that, I had enough material left over for a sequel… at least.

How many more books in this series do you foresee?

I envision four of them, so I’m halfway there.  But by the end of the series I will have created enough characters that I’ll certainly be able to continue if my publisher, Medallion Press, wants me too.

If you awoke in the middle of the night and found real life werewolves stalking up the stairs of your home, what would you do?

I don’t own any silver swords from the Inquisition, so I’d probably jump out the window.  It would be nice if I had a camera handy to get a good cover shot, though. 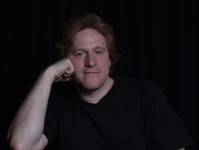 Gregory Lamberson is the two-time winner of the IPPY Gold Medal for Horror for his novels Johnny Gruesome and Personal Demons, the first book in the occult detective series “The Jake Helman Files.”

Lamberson enjoys mashing the horror genre with action packed crime drama, police procedural, and noir. He is also an indepenedent filmmaker, with four horror features to his credit, including the 1988 cult classic Slime City and its 2010 sequel Slime City Massacre.

To learn more about Gregory, please visit his website.

The Eagle and the Snake by W. Craig Reed