Acclaimed author Don Winslow says that Vincent Zandri’s PERMANENCE “is a tough, stylish, heartbreaking car accident of a book: You don’t want to look but you can’t look away.” Based upon Zandri’s most anthologized Pushcart Prize-nominated short story of the same title, PERMANENCE is the Hitchcockian story of Mary Kismet, a travel agent and grieving mother of a toddler who suffered an apparent accidental drowning. Now, all alone in the world, she attempts to ease the pain of her suffering by immersing herself, body and soul, into a love affair with her psychiatrist, a man haunted by his own demons. A tragic novel of obsession, dark compulsions, and madness, PERMANENCE transports the ill-fated lovers from New York to Venice, Italy, and back again.

I recently had the opportunity to chat with noir author Vincent Zandri about his work.

PERMANENCE is based upon your most anthologized Pushcart Prize-nominated short story of the same title. What compelled you to revisit the story and deepen it into a novel?

I wrote it back in the mid ‘90s when I was looking for a full-length novel topic. Since I was scared to death of making something up out of thin air and eventually failing at it and becoming discouraged, I decided to extend the breadth of a relatively successful existing short story (and PERMANENCE the short story is actually a long short story, if you get my drift. Twenty-some pages and six thousand words or more). Looking back, I believe I divided sections of the short story into prospective chapters and, from that point on, wrote the story out in a series of titled vignettes, which makes the book read a lot like a prose poem. I was going for a very dark, almost gothic literary thriller here, and I think I succeeded on some levels despite being very young and naïve at the time. I remember writing this one over a series of exhausting weeks, very early before work, in the dark and the lonely cold of morning at the kitchen table.

This version of PERMANENCE is a re-publication of the original released in 1995, with portions of the book rewritten, and a brand new plot point added at the end. Why did you decide to revise the original?

I know some purists might say, “Leave it alone. Let the piece of art stand for what you were at the time.” But I believe that now, I’m a better writer and there are things in the old version that are just simply not right. Plus, there was an opportunity to further extend the plotting in a way that moves the story forward more organically and at the same time, add another entire dimension to my main character. Think of it like revisiting a cave you used to sneak into as a child, and this time you see an entirely new passage you never realized existed before. Naturally, you want to fire up the torch and go exploring.

On your blog, you wrote that PERMANENCE is not your everyday Vincent Zandri thriller, and called it “a bit of an experiment.” What is different about this story, and why do you view it as an experiment?

My other novels, the e-book bestsellers, are more traditionally written narratives in the same vein as Robert B. Parker (as in the case of the Jack Marconi series) or Charlie Huston (as in the case of the Dick Moonlight thrillers). Tightly woven, action-packed thrillers, written in the first person present or past, with short, numerically accounted for chapters and cliff-hanger chapter endings. PERMANENCE, on the other hand, is written in the form of vignettes, not traditional chapters. These vignettes bear their own titles also. You can actually read the novel through once, and then later on, go back to it again and again and re-read your favorite vignettes, the same way you would a book of poetry. Think in terms of Hemingway’s IN OUR TIME, which greatly inspired the form of PERMANENCE, almost as much as Stephen King inspired the actual story.

Mary Kismet, the main character in PERMANENCE, is a very troubled woman. Tell us a little bit about her character, and how the woman in the water on the book cover represents her plight.

Water is the big image of this novel. You can’t miss it. And yes, the cover, designed by Jeroen Ten Berge of New Zealand, is a stunning representation of a drowning Mary Kismet. I did my MFA dissertation on repeated imagery in the novel. Not all novels have it, but all the good ones do. That’s not to say some bad novels also contain repeated imagery, but you get my drift. Here’s an experiment you can perform in your free time. Open up any good novel and examine the sentences and look for a word or words that are repeated throughout. You might be reading a novel that contains the word blue in it many times over. Perhaps the main character is a swimmer who swims in blue waters, and thinks always in terms of water and the color of water, which is often blue. Naturally, blue will be a constant presence in her life. So in a novel about her, you will of course want to have the color blue or the word blue or some derivation thereof repeated often enough to spark a subconscious signal in the reader’s brain. You might not be conscious of this repetition upon the first reading, but later on if you look for it, you will begin to recognize a very specific pattern. The pattern is evident in the repeated imagery.

PERMANENCE relies heavily not on the word blue, but nonetheless on this repeated imagery of water and, on occasion, its antithesis, fire and earth. The book is not just a straight narrative, but a multi-dimensional piece of work that can be looked at from several different angles. Like a painting, for instance. You look at it straight on and it’s one thing. But you look at it from a different angle, it becomes something else. Mary Kismet is an enormously complex and troubled character, and the repetition of words and images in her brain is a constant reminder of her madness. For this reason alone, some readers, especially fans of literary novels, still consider PERMANENCE my most accomplished work.

PERMANENCE has been referred to as a Hitchcockian literary psychological suspense novel. How has Hitchcock inspired you, and what other authors have been influential in your work?

Hitchcock was interested in interiors as much as exteriors. Maybe more so. Of course, we always think of the great movies and the exotic sets and the role setting plays in them. FOREIGN CORRESPONDENT comes to mind, and the haunting scenes that take place on the dark, deserted city streets or in the paddlewheel house. Or VERTIGO, in which Jimmy Stewart can’t bear tall heights while living in a vertically challenging city like San Francisco—a place where dozens of people fall to their deaths every year from jumping off the Bay Bridge.

But it’s not what’s happening on the outside that matters. It’s what’s happening in the brains of these characters, and how they react to the external forces being heaved upon them. In REAR WINDOW, the action takes place almost entirely in the main character’s eyes and mind. He’s not just observing what’s happening in those windows across the alleyway while confined to a wheelchair. It’s deeper than that. He’s seeking out a specific set of patterns that will all come together to validate the suspicions running around in his mind. Hitchcock was a master at dramatizing the unreliable narrator who is on the verge of madness. Other authors who are great at this are Stephen King, naturally. Max Frisch. More recently, Charlie Huston, who is a noir master.

If a reader is just discovering your work, is there one of your books that you recommend they read first?

I get asked this a lot, and I always lead them to two books. THE INNOCENT, which is the first in the Marconi series. It’s a traditional noir thriller about a prison warden who goes on the hunt of an escaped cop killer and in the process gets accused of murder one when the cop killer shows up dead. Also, THE REMAINS, my 2010 novel about an artist who is being hunted down by a man who abducted she and her twin sister thirty years prior when they were children. Both are indicative of the range in which I like to write. Both are being republished in September by Thomas & Mercer in paper, audio, and e-book. Thus far, I’ve sold about one-hundred-fifty- thousand copies of THE INNOCENT in previous editions, and close to one-hundred-thousand more of THE REMAINS. 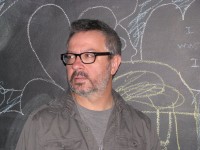 Vincent Zandri is the #1 International Bestselling Amazon author of THE INNOCENT, GODCHILD, MURDER BY MOONLIGHT, and other titles. An adventurer, foreign correspondent, and freelance photo-journalist for RT, Globalspec, IBTimes and more, he lives in Albany, New York.