Sharon Linnea’s latest Movie Mystery series launches with THESE VIOLENT DELIGHTS, which weaves a mystery around the re-release of a movie, TRISTAN AND ISOLDE, one of those movies that defined a generation. Twenty years after its original run, as the studio plans a major re-release of the film, the actress who played Isolde realizes how many members of the cast and crew have died or disappeared. Can the killer be stopped before the reunion––or will the rest of the cast face a similar fate?

Romantic Times Book Reviews says of THESE VIOLENT DELIGHTS: “Great characterization and twisty surprises add up to an excellent mystery.”

Wesley Strick, screenwriter of CAPE FEAR and NIGHTMARE ON ELM STREET says the novel is “A haunting fairy tale of filmmaking… It gets The Movies right––from glittery surface to sinister undertow.”

Rebecca Cantrell, award-winning author of the Hannah Vogel novels, warns that: “The characters will haunt you long after you turn the final page.”

Sharon Linnéa agreed to answer a few questions for TheBigThrill:

You have an incredible diversity of published works, Sharon. What made you write this particular story?

In storytelling, I find the most fertile ground to be the territory between what seems to be and what truly is. All good mysteries and thrillers set up camp there. Nowhere is that dichotomy more obvious than it is in the art of acting. Somehow, the relationships between characters in a movie or play inform the relationships between the actors themselves. And then there’s the publicity machine—who the actors are positioned as, as opposed to who they really are. For example, one chapter in THESE VIOLENT DELIGHTS opens with the official bio of actor Anastasia Day, daughter of aristocracy, educated at the finest schools—and then we meet her, in reality the impoverished 10-year-old daughter of an alcoholic American hairdresser. How can both be true? And what version of the truth must be discovered to reveal what motivates a serial killer?

Also, for 10 years I was a ghostwriter for top Hollywood actors and Nashville musicians. I was very involved with theatre when I first moved to New York; I produced a feature film that did well on the indie festival circuit. And I married a director. (By the way, my other new book is nonfiction: NOW YOU TELL ME! 12 ACTORS GIVE THE BEST ADVICE THEY NEVER GOT.)

These Violent Delights is not your typical police procedural, is it? How would you classify the story?

Mostly, it’s about a buried secret that motivated a serial killer during a film production, and the quest of the remaining cast to figure it out and stop it before the reunion when the killer plans to make toast of them all. It’s a story where the key to solving the mystery is buried twenty years in the past.It’s a ticking-time bomb mystery, it’s a sweeping romance, it’s a behind-the-scenes Hollywood yarn, it’s a sexual coming-of-age story, it’s about betrayals that are intentional and those that aren’t. It’s about grace and healing.

What sort of protagonist is Anastasia?

Anastasia (Stacy) Day is not hard-edged at all. She’s more of an Everywoman, who has to fight her own demons of agoraphobia and fears of abandonment to hunt down the killer. It really is a story of her finding her courage—“doing it anyway.”

Rather than having any particular skills to solve the mystery, Stacy is the least equipped for the job. She can barely bring herself to leave her late husband’s castle. But she is also bright, kind, and has learned a lot in the school of hard knocks. On the other hand, she is perfectly positioned to solve the crime, because as the remaining star of the picture, she is the ultimate lightning rod for everyone’s buried secrets.

Are we kept in the dark as to who the killer is until the end? How do you manage to maintain the suspense?

It’s certainly my intention to keep readers in suspense until the end. At the beginning of any mystery, the author makes a pact with the reader. There are certain rules the author will follow (introducing the culprit fairly early on, giving enough clues to keep you going) and that the reader agrees to follow (not looking at the ending in advance). But then, let the games begin. Can I play by the rules of the genre and still keep you guessing? But in a way that’s fair, that you’ll enjoy, and will make a satisfying ending? What I played with this time was giving almost everyone a motive just disguised enough that when you figured it out, you thought you had the plot figured out. A really well written mystery or thriller should be a very satisfying read the second time through, when you can see more clearly what the author is doing.

Were there any particular themes in the novel? A journey of redemption? Or revenge?

All of my thrillers and mysteries could have the same subtitle: “The Redemption of [insert name of protagonist].” There’s a reason this particular character must fact these particular obstacles and these villains/antagonists. The plot exists to pierce the protagonist where she is wounded, and make her decide to either die or begin to heal. The antagonist(s) exist to make him or her face the pieces of themselves that haven’t yet been fully integrated. In some ways the hero and the villain are yin and yang. Life is never what you expect, and redemption can arrive when you least expect it, if you’re willing to take the risk.

Your book trailer is excellent.

My publisher produced it, but I got to be involved in the process. Looking at the most successful book trailers, what I’ve come to believe is threefold: 1) the point of a book trailer is to let possible readers understand and become excited enough about the story to buy the book;  2) Successful trailers are scripted and story-boarded. They should be barely over a minute long, so every one of those seconds is precious. 3) You have to work with really good people—which doesn’t mean really expensive people. (I heartily recommend V-Worx, whom Arundel hired to do mine.) I really had a blast helping to cast, choose costumes and approve the script.

Did you plan out the Movie Mystery series? How will it develop, do you think?

Each mystery has a title from a Shakespearean play. The next is GRACES TO THE GRAVE, from Twelfth Night. Stacy and Peter work together to continue to solve mysteries. They have the advantage of being normal people from lower or middle-class backgrounds who now have entrée to virtually all segments of society. Their cases take them from British aristocracy to Hollywood, to the folks of Peter’s father’s parish, to the gang in Stacy and Peter’s adopted home of Rolling Rock, Kentucky.

What drives you to take on such a diversity of projects?

I finished my first novel when I was in 7th grade (YA action-adventure, I’m guessing), and kept writing them, waiting for some brilliant editor in to see my potential as novelist. So while I was waiting for Jen Enderlin at St. Martin’s to find me, I wrote other things. I worked as a book editor (William Morrow and Taplinger), a magazine editor/staff writer (5 national magazines), a ghostwriter, a playwright, a screenwriter. One opportunity generally led to several others.

In fact, making a living as a writer and editor, if you’re curious and even mildly talented, is a fascinating thing to do. I’ve also found that mastering the writing of one genre sharpens you in another. Writing young adult fiction and nonfiction teaches you how to leave out extraneous material and never be boring. Writing biographies, and interviewing people about how and why something happened, and hearing it from many points of view, flexes your muscles for creating multiple characters, with their distinct voices and motivations in fiction.Writing short nonfiction taught me how to “turn” a story and generate emotion. These are each arrows in the writer’s quiver. And, as a novelist, it’s all material. Every single drop.

I was asked to write young adult biographies of Raoul Wallenberg, the young Swedish architect who saved 100,000 Jews at the end of World War II, and Hawaii’s Princess Kaiulani. Fascinating people—both the subjects of the biographies, and the people I interviewed doing the research. Changed me forever. But I am telling you right now, the skill that has helped me more than any other is to learn how to really listen to what someone is telling you.

Your Eden series books sold over 55,000 in a few weeks when they were re-launched.

Arundel, my new publisher, understood how to “play” Amazon—the first book in the series was free for a week. But that doesn’t come close to explaining what happened. CHASING EDEN, BEYOND EDEN, and TREASURE OF EDEN were numbers 1,3 and 4 in paid Kindle Thrillers/Action Adventure for a quite a while. (George R.R. Martin snuck in there somehow.) All of us try to write a whopping good story and hope that readers discover it. We’d gotten good reviews and good write-ups and people blogged about them, but that still doesn’t explain it. One of those Kismet things, where success breeds success.Something happened that to this day I still don’t understand. Although it was wonderful.

What other authors or people have inspired you in your writing?

As a teenager, I loved Mary Stewart’s books, especially her Merlin trilogy. I was first lured into the land of thrillers and action adventure by Lockhart Amerman. I loved how his books were exciting and hip and sly and funny all at the same time. I think my new YA secret agent series owes a lot to him.

Do you plan your stories?

When writing mysteries or thrillers, the real skill is in the artful disclosure of information, so I need to know where the story is going to be able to bring the reader along. In the Eden thrillers, there were so many characters, and it was so important who revealed what and when that every chapter was outlined before we started.

In mysteries, there’s more room to “walk around inside the scene,” and usually more plot is decided by character, so there’s more time to explore who people are and how they got to be that way. Honestly, I’ve never understood how writers can start a mystery without knowing who did it. The set-up seems like it must be haphazard if the author doesn’t know what seeds they’re planting. But I’m willing to have someone explain it to me!

With THESE VIOLENT DELIGHTS, I woke up one night having dreamed the final scene. Then I simply had to write the rest to get me there.

At a book signing once, a mother asked me if her daughter needed psychological help because she wrote in notebooks and had imaginary friends. She was so relieved when I told her the girl (who was a very sweet 11-year-old) was just a budding novelist. 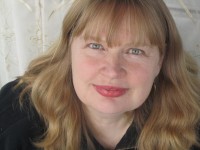 Sharon Linnéa’s most recent novels were the Eden Thrillers: CHASING EDEN, BEYOND EDEN and TREASURE OF EDEN. The next Movie Mystery, GRACES TO THE GRAVE, will be out in 2013, as will the first of her new young adult thriller series. Sharon lives outside New York with her family, horse, cats and huskies.

To learn more about Sharon, please visit her website.