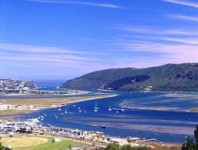 This weekend – a long weekend in South Africa – saw the Knysna Literary Festival.  Knysna is a small town on the south coast of South Africa, mainly famous for its spectacular lagoon and oysters.  But it seems to be traditional in this part of the world to have cultural events taking place in small towns.  And this year the festival had a focus on mysteries, thrillers, and true crime.

The festival kicked off on Friday with Mandy Wiener discussing her true crime book KILLING KEBBLE.  This is a truly remarkable account of mining magnate Brett Kebble’s last days, based on Mandy’s research and interviews with the people held for his murder.

Amazingly, they freely told her their stories despite the fact that she made it clear she would write it in the way she saw fit.  Kebble took the pyramid scheme to new heights with an arcane structure of holding companies around a genuine mining company with real assets.  Each company in the group was borrowing money from the others against the same assets.  When it became clear that the pyramid was about to collapse on top of him, Kebble took out a big life insurance policy for his family and orchestrated his own murder – designed to look like a car hijacking gone wrong.  As fiction, no one would ever believe it.  As an expose of a true case teased out by investigative journalist Wiener, it is a revealing portrait not only of a mind-blowing plot, but also of a South African subculture where arranging a hit – even on yourself – is as easy as snapping your fingers.

The main event on Saturday was a mystery writer panel consisting of Mike Nicol (well known to readers of this column), Margie Orford and myself (representing Michael Stanley).  Mike chaired the panel and led in with an introduction to crime fiction in South Africa, more or less starting with James McClure and revealing apartheid-era novels.  Then he moved on to the modern surge of local mystery fiction led by Mike himself, Margie and Deon Meyer.

While there was discussion on what mystery writers do and how they do it, the major question was why.  Margie spoke of returning to South Africa after the change of government and trying to come to grips with the magnitude of the local crime problem and the fear that it engendered in her for herself and her young daughters.  Unlike the majority of people who close it away behind high walls and denial, Margie addressed it head-on, becoming a journalist focussing on the area.  But she wanted to work out the cases – bring order into chaos, try to get behind the awful statistics.  Fortunately for readers, she found the best way to do that was through fiction. Mike Nicol moved from poetry and literary fiction into crime writing as a new challenge, and shines the spotlight on violence and corruption in his highly-acclaimed Revenge Trilogy.  He’s promised to do an interview here about those books in a month or two. 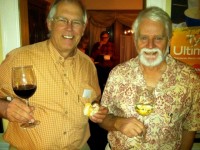 And Michael Stanley?  Our mysteries are set outside South Africa in Botswana and the backdrop is more on culture and southern African issues than South African crime.  The first book concerns the exploitation of resources, the second the aftermath of the awful bush war in then Rhodesia and the third the plight of the Bushman peoples of the Kalahari. Yet much of what Mike and Margie said rang a bell with me too.  Thrillers and mystery fiction are set against a backdrop.  That backdrop is the culture in which you write.